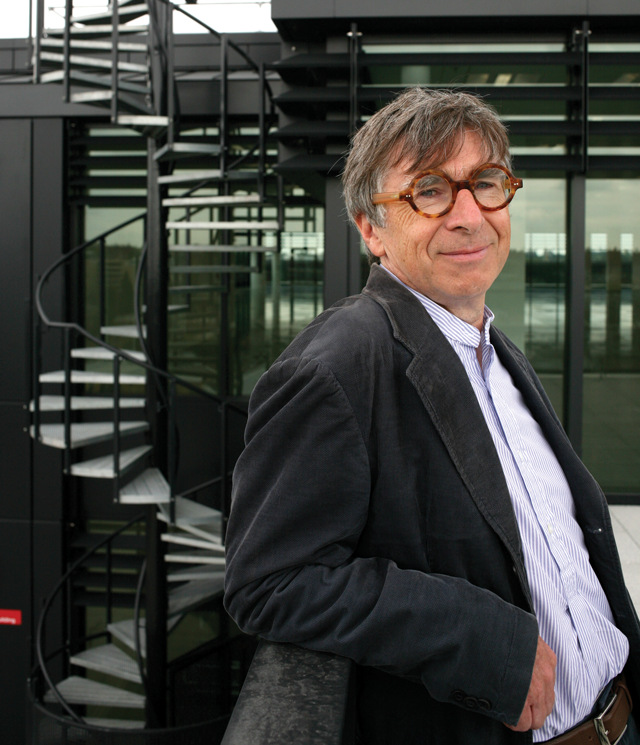 Peter Millican sits at his desk absorbed in the finishing touches of his 2016 season, on his laptop, in the space that is as near as he gets to an office. Around him mill the hundreds of visitors to King’s Place, going for a coffee at the Green & Fortune café to his right, passing through to the Rotunda restaurant to his left, going down to the concert halls and art galleries via the escalators in front of him, or just sitting at the other tables around him, chatting and working on their own laptops.

It might be called King’s Place, but this is his place, a dream on which he lavished £100m to create a single building in which culture and commerce live alongside and nourish each other.

King’s Place was the first of the cultural hubs to open in the extraordinary King’s Cross development estate, in 2008, and it has since been followed by Central St Martin’s, the Art Fund, the Cartoon Museum, Google, Louis Vuitton, Universal Music, almost falling over one another to get a spot in the 67 acres which Millican long ago saw as an international crossroads. He’d bought the site in 1999 having just completed his first art/work building at Central Square, Newcastle, on another former post office site which opened in 2000.

“I think art civilises life and I think places like this mean quite a lot to the people who work in the building” Millican said when King’s Place opened. “It was always my intention to have a mix of art and office, there was never any intention to put residential or retail in, and I was very keen to put visual arts and music into it. But that’s about as far as my ideas had got before I found the place.”

A Tynesider now by choice, 66-year-old Millican is the son of a Liverpool pharmacist who decamped to the North East to do a business degree but on graduating became an optometrist, developing a chain of shops. He sold them 20 years ago. He has no interest in personal publicity, and home is with his wife and three daughters who remain out of the public gaze. He spends two days a week in London, the rest on their beloved Northumbrian farm near Corbridge.

The Central Square project has not been the success he would have hoped for, having had its potential pruned by the recession and the local authority finance crisis. But King’s Place presides over a development that more than lives up to his expectations. “It’s better than I imagined, astonishing result”, and his praise goes to Argent and its then chief executive Roger Madelin for riding through bank crashes and discarding a Foster scheme which, Millican, says, would have killed the area overloading it with residential development. “The more restaurants that open the better” Millican says. “Clearly it’s critical mass, people mill around, it’s a Rialto. King’s Cross is an uncanny place now”.

Which could be said of his place. As well as being home to around 100 small arts endeavours which pay minimal rent, King’s Place is the HQ for The Guardian and Observer, Aviva who has replaced Network Rail, the payroll company Logica, Veolia, Hammerson and the charitable foundation Esmée Fairbairn. About 3,000 people work here and it’s full, turning over £1.25m a year which is modest after eight years, but that’s not the point. It is an arts venue that also a workplace and a meeting place, where culture is part of living, and he has no idea what the passing footfall is.

King’s Place opened at the start of a recession. “We’re much fuller than we were, the audience has got better, but the conference business has grown and grown and we’re close to break even” Millican says. “I always wanted to get to break even because philosophically you can hold your head up, it’s sustainable. We were losing money but we’re in a pretty resilient position now”.

The look of the place hasn’t changed, but two years ago he sold the building to a property company and leases it back to his charity Arts Space for a peppercorn rent on a 99-year lease. “It’s effectively gifted to the charity – the halls, gallery space and music base have a proper lease giving security for 99 years, so it’s just got to cover its running costs and we’re pretty much there.

“It’s incredibly successful financially to get to where we’ve got to from where we started. People know us now, we’re selling more tickets”.

Millican has built on the partnerships he created, with Rungwe Kingdon’s sculpture foundry Pangolin which runs the sculpture gallery at the main entrance, and with John Nugent of Green & Fortune which runs the catering at King’s Place, including the very successful Rotunda restaurant (most of whose meat comes from Millican’s own farm) – and that partnership is blossoming with contracts at Ogilvies and Seacontainers. He has rationalised the visual art exhibitions with a new partnership with the gallery Piano Nobile.

But music is the presiding art form here, and Millican has just revealed his new year-long “Unwrapped” programme, the subject of which this time is Baroque (previous years have included Mozart and Bach, and a very chancy but triumphant year of Minimalism). He used to programme entirely on his own, which he acknowledges was a huge risk for someone with no musical training, but he has a knack for making the right links. The resident orchestra was unknown when he brought it on board, but now the Aurora has an international reputation; the associate artists are the Brodsky Quartet, the London Sinfonietta, the Orchestra of the Age of Enlightenment and most recently The Sixteen. “They like coming here, we look after them…”.  There’s an association with Poet in the City, and a new one with Bill Banks-Jones’s Tête à Tête, the company devoted to performing only new operas. “I saw three Tête à Tête operas last year, one was stunning, one was awful and one was good - that’s how it should be, isn’t it?” So Tête à Tête will be bringing their festival to King’s Place in the summer.

Programming was done in consultation with the artists, and if someone he trusts wants to do something he will let them if he can. “There’ll be a few little gems in the Baroque season – including Handel’s setting of Brocke’s Passion. It’s hardly ever performed but Stephen Cleobury (of the Choir of King’s College, Cambridge) wanted to do it, so who am I…?” But Millican now has a small team of programmers as well, Amy Sibley-Allen, Rachel Jackson and Rosie Chapman, because the burden of programming while the catering and conferencing was taking off was becoming too much.

In hindsight, Peter Millican says, King’s Place was a terrifying risk. “It was a calculated risk, though, which is what King’s Place has always done, and although there’s no risk in the balance sheet, the programme is doing it all the time. We’ve discovered new audiences, and Minimalism Unwrapped was extremely difficult to get right, but it introduced audiences to new music and new audiences to King’s Place so it was very good for us. And it’s been the most fantastic fun.”