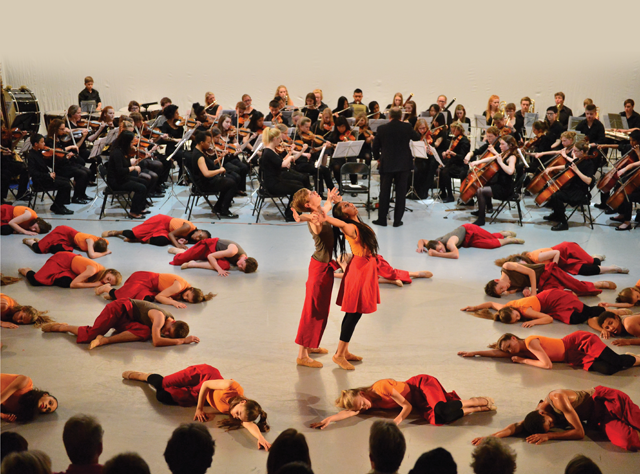 How Boris fills the gap

The title, the Mayor’s Music Fund (MMF), is a misnomer. The scheme for London primary state school children brings them together with music tuition for the crucial transition years between primary and secondary state school, after the state-funded Wider Opportunities scheme’s year ends in Year Six.

The MMF might seem to provide what a government programme should, and although it was created in the name of the mayor it has not public funding, and Boris Johnson is merely the figurehead as the patron who is helping to draw the private funding which is the its only source of income.

Yet despite its lack of subsidy, the fund is celebrating five successful years, guided by Ginny Greenwood as its chief executive. “We were set up with two aims. The first was to address that gap and fund those children to give them four year awards with two hours of tuition a week” she says. “The second was, out of consultation, to set up large scale partnerships that would bring music services together with professional arts organisations, deliver ambition projects and give hundreds of children the opportunity to learn from professionals”.

It raises about £400,000 a year – a total of £1.5m to date – and so far 335 London schoolchildren have benefitted from the four year scholarships of at least two hours of professional tuition a week, with 8,500 young musicians having been reached by the fund’s partnership projects.

It was the brainchild in 2010 of Munira Mirza who was then the mayor’s cultural advisor and is now deputy mayor for culture and education. She set up an advisory board, which included Jude Kelly of the Southbank Centre and Sir Nicholas Kenyon of The Barbican, to look at how London could deal with the gap.

Ginny Greenwood joined first as a pro bono adviser, able to call on long experience of fundraising in the arts and education. Among her projects has been the remarkable Art Rooms in which children aged five to 16 with serious behavioural difficulties are helped through creativity to find self-esteem, self-confidence and independence. She set up the Hampstead and Highgate Festival with Barry Millington as artistic director, and was in at the start of the Mulberry Bush School for abused children. “My interests have been in disadvantaged children, education and in last ten years using the arts as a medium of giving disadvantaged children that start in life. So when Munira approached me to do this, it ticked all the boxes” she says.

The fund was set up early in 2011 and Greenwood set about creating the new charity, devising a business plan, making contacts. Although there is no funding from City Hall, the MMF was given secure office space in City Hall, office services and the use of equipment. “But it’s tough” Greenwood says. “We couldn’t be set up with an endowment fund, so we have to raise everything including our salaries (there is a staff of three, plus an intern), and considering the reach we have it’s quite a full-on operation”.

The reach is all 32 of the London boroughs, and the key partners in the operation are London’s 29 Music Education Hubs (MEHs), co-operatives including local authorities, schools, professional arts organisations and community bodies set up by the Arts Council in 2012 with Department for Education funding (£75m in 2015-16). That linkage allows the MMF to reach into 1,800 or more primary schools to offer scholarships.

Each year around 60 scholarships are started, each one with a four year cycle, costing around £400,000 a year to maintain. Scholarships start for pupils at the age of nine or ten and take them well into their secondary school careers. They have to first prove a genuine interest and potential in music-making, and they will then receive funding for professional tuition for at least two hours a week. Through the MEHs they can also get the instruments they need.

Projects in which different boroughs and their resources have been combined with professional arts organisations have been a resounding success, and so far 25 have been funded by the MMF in 28 boroughs with more applications pending. An outstanding example in 2015 was Firebird (pictured overleaf), a collaboration between Richmond and Hounslow music services, the Royal Ballet School and the Philharmonia Orchestra working together to create a production of the Stravinsky ballet in which the dancers perform among the musicians, with a final performance at the Royal Ballet School in Richmond Park.

Greenwood has successfully appealed to individual philanthropists, with 250 so far funding one or two pupils each, but getting corporate involved has been difficult. “They’re looking at employment, at apprenticeships, those kind of things” she says. “But if you can make the connection between making music and being a good employee – teamwork, dedication, creativity, self-possession, public presentation, all of which goes with music performance  – they might be interested”.

But she has whole-hearted support from the music world. A small regiment of ambassadors that would turn out for and sometimes host fund-raising events include Jools Holland, Nicola Benedetti, Steven Isserlis, Jane Glover, Rachel Portman and Sir John Tusa.

Fundraising events are vital, but can be a risk when they take up too much of the precious time of a small executive team. In 2014 Greenwood persuaded her trustees to sanction the London Music Awards held at the Roundhouse in which the achievements of young people on the scheme are acknowledged and in which the music world also has a role. The top award goes to a London Legend who in 2014 was Jazzy B and in 2015 Ray Davies of The Kinks, and the event has been supported by a range of sponsors from the Mackintosh Foundation and Live Nation to PRS for Music and AEG Live. But its rewards in the latest version did not match the organisational effort, and it is being rethought while in 2016 the principal MMF fundraising event will be a thank you party in the spring for the departing Boris Johnson.

For the MMF finds itself at a junction. It is secure as an independent charity, but Ginny Greenwood has stood down – “five years is enough”  - to spend a year travelling; a new mayor will come in in May who may not be so enthusiastic in his support of the fund. With Johnson will go Munira Mirza, the inspiration for the scheme, and the chair of trustees Veronica Wadley, who is the mayor’s special adviser. Greenwood’s head of programmes, Chrissy Kinsella, will act as interim CEO.

The future, Ginny Greenwood thinks, may lie in association with the Centre for Music, the £278m scheme which has just passed its first feasibility test to be built on the site of the Museum of London: half of its purpose will be as a music education centre, in which the Greater London Authority will have a large stake.

But as an independent charity not dependent on public funding, the MMF’s future is secure, if obscure, and its success is its lodestone for charitable funding. “We don’t measure success by the money we’ve raised but by the impact we can see in the children we’ve worked with, and that radiates to their families, their schools, their friends, and follows them for the rest of their lives. It gives them an introduction to the world of music – they may not be musicians in the end, but work within the industry.

“When we started I knew about the benefits of music education, how it helps with other disciplines, but I didn’t realise the profound effect it would have” Ginny Greenwood says. “That’s success”.