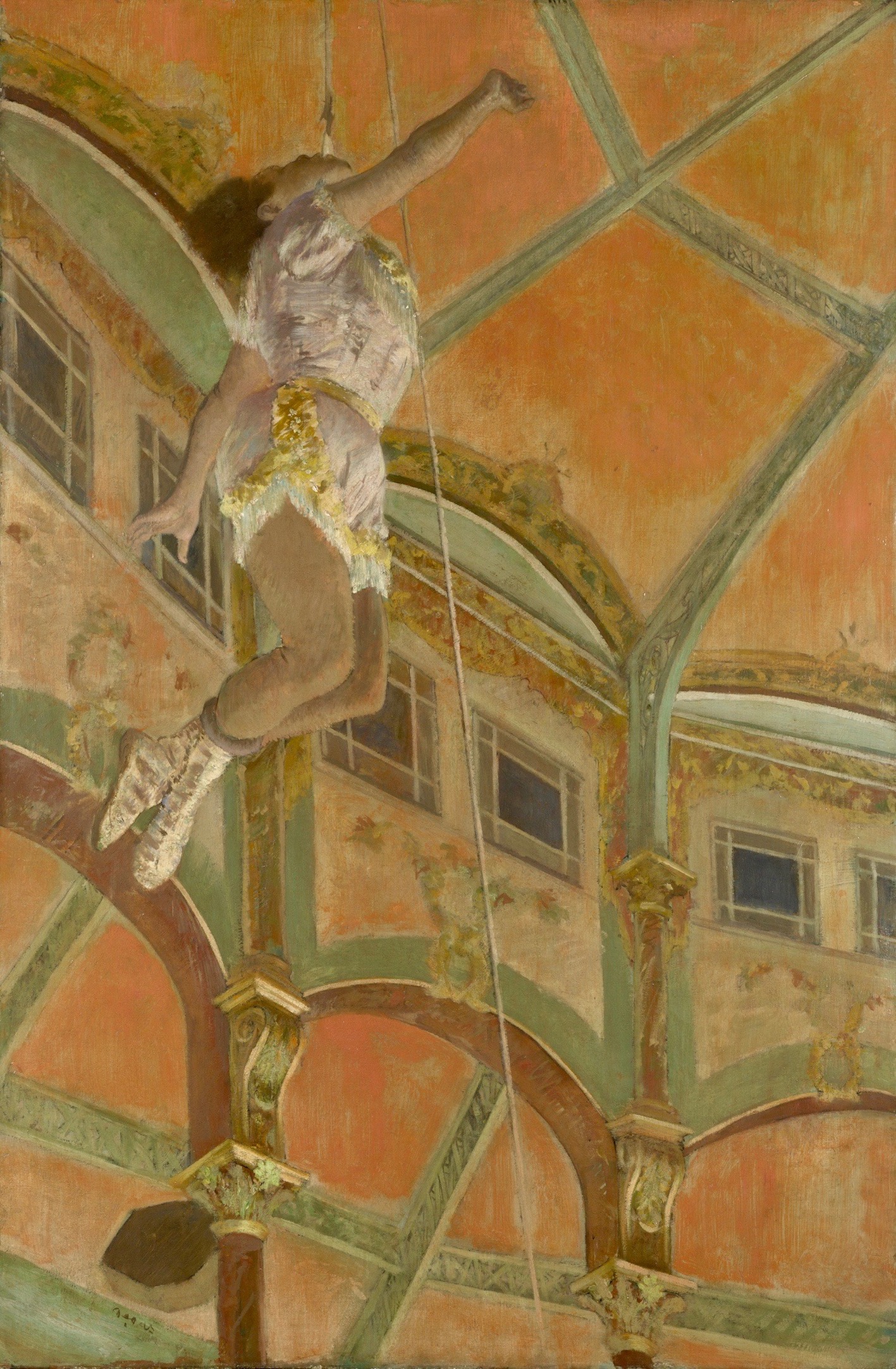 This Degas painting of 1879,Miss La La at the Cirque Fernando, is one of the most enduring images from the hey-days of circus, and is the centrepiece for an exhibition opening at Weston Park Museum, Sheffield, this week to celebrate the 250thanniversary of the art form.

The mixed-race Miss La La was born Olga Brown in Stettin, now in Poland, in 1858. Although barely five feet tall she had remarkable strength, and with the Kaira Troupe – and  billed sometimes as “Olga the Mulatto” or “The African Princess” - performed as a trapeze artist, a hand-balancer, a tightrope walker, a musclewoman and, as seen here, an iron jaw performer hanging by her teeth from the roof of the Cirque Fernando in Paris. She was a superstar of the most popular entertainment form of the late 19thcentury, with part of her act being to hang by her teeth from a trapeze supporting a man form either leg. 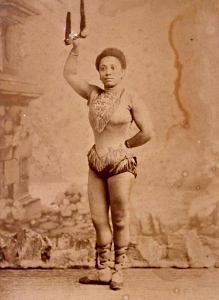 She worked with a stage partner, Theophila Szterker, as The Two Butterflies, who died after a fall in 1888, the year Miss La La married an American contortionist and circus manager, Emanuel Woodson, and retired from the ring.  She disappears from history after a 1919 American passport application, but she was immortalised by the most celebrated painter of the day, painted at the height of her fame, in the picture that now belongs to the National Gallery (copyright National Gallery).

“The painting presents many of the concepts of 19th century circus that are as relevant today as they were then, including the freedom to perform regardless of race and gender and an appreciation of the sheer physicality and skill of the performer” says Professor Vanessa Toulmin of the University of Sheffield. “Circus was, and still is, an inclusive and universal language of performance; from its inception in 1768 it brought a new dimension and freedom of expression, combining the skills and expertise of different nationalities into a mixing pot that still enthrals 250 years later.”

Sheffield’sCircus! Show of Shows exhibition, which opens on Wednesday, July 25, is co-curated by Toulmin, professor of early film and popular entertainment at the university, who is involved in a series of exhibitions celebrating the 250thanniversary of the invention of circus, others opening at Time and Tide Museum of Great Yarmouth Life on October 6 and at Newcastle’s Discovery Museum on October 20.

The birth of circus is dated to 1768 when a former cavalry soldier and gifted rider, Philip Astley (1742-1814), acquired a piece of land on the Thames at Lambeth and opened a riding school on it with a circular arena in which, on summer afternoons, he presented “feats of horsemanship” for an enthusiastic public. The arena became known as “the circle” or “circus”.

Astley wanted to widen the appeal of his arena and found acts in London theatres, including jugglers, rope dancers and acrobats – and pantomime involving clowns. The circus we know was born, and in 2015 in Astley’s birthplace, Newcastle-under-Lyne, a statue to him was unveiled.

The exhibition traces the development of circus from then, with rare playbills about the black circus impresario Pablo Fanque made famous later by the Beatles’ Sergeant Pepper’s Lonely Hearts Club Bandalbum. There are also original circus costumes and props, including the elaborate trunks worn by the 19thcentury foot-juggler Edwin Moxon. From more recent times come the 1990s trapeze and costumes used by Becky Truman, who at 21 formed her own all-woman trapeze company n Bradford.

Sheffield’s Circus! Show of Shows will openon Saturday with Family Fun Day on Saturday with the Greentop Circus’s acrobatic feats, and the series continues in October at the Time and Tide Museum of Great Yarmouth Life and at the Discovery Museum, Newcastle. The exhibitions have been developed through a partnership between Museums Sheffield, Norfolk Museums Service, Tyne & Wear Archives & Museums and The University of Sheffield Library National Fairground and Circus Archive, supported by a £98,000 grant from the Heritage Lottery Fund (HLF).

“In the 250th year of the circus in Britain, money raised by National Lottery players is enabling the drama, the highs and lows and the hidden stories of the circus to be shared with thousands of people” said David Renwick, HLF head in Yorkshire and the Humber, says. “As part of the nationwide celebrations, we are excited that the three exhibitions will engage people of all ages in local circus heritage.”