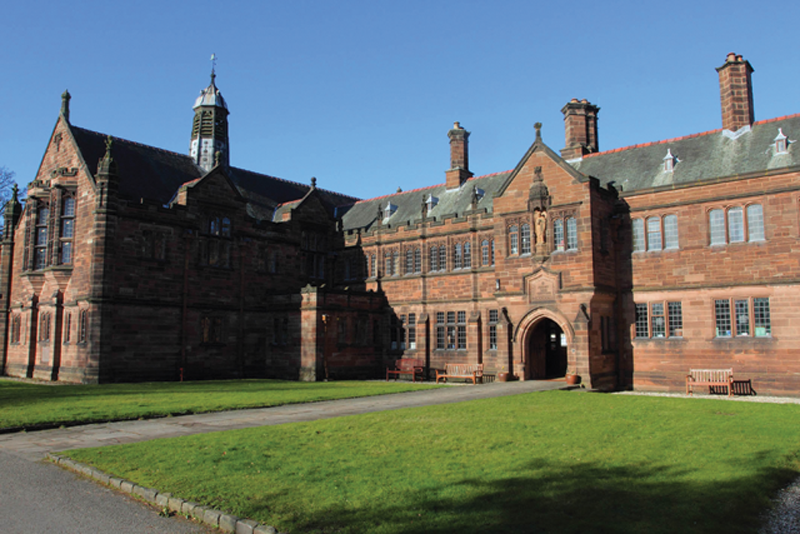 One of the loveliest libraries in Britain is a haven for writers and readers. Patrick Kelly pays a visit to Gladstone’s Library

Tucked away in the tiny village of Hawarden in North Wales, nestling in the lee of a churchyard and a restored tithe barn is an unusual institution. Coming across its Gothic façade, mullioned windows and neat pretty grounds, you might mistake it for a minor public school, or perhaps a Victorian almshouse. But here, six miles from Chester, on the road to Wrexham and round the corner from the village post office and the Fox and Grapes pub, is Gladstone’s Library - Britain’s only Prime Ministerial library.

William Ewart Gladstone dominated British politics in the 19th century becoming PM four times and spending a total of 62 years in the House of Commons. A great believer in reading, he used to open up his extensive library in the family home at Hawarden Castle so that local children could read there.  On his retirement, he bequeathed his 32,000 books to set up a free library. Indeed, Gladstone, then in eighties and armed only with a wheelbarrow and the help of a valet, transported all the books from his home and unpacked them himself!

Initially, the library building was a temporary shed-like affair of corrugated iron, but in 1906, the current building was erected and on Gladstone’s instructions, it was equipped with bedrooms, making it the only library in the UK with bed and breakfast accomodation attached.  There are now 26 bedrooms, in various configurations, in this delightful Grade 1 listed building.

“It was important to him that people had the chance to be immersed in books” explains Peter Francis, the warden of Gladstone’s Library. “He didn’t want his collection to go to Oxford or London, which in his view already had plenty of books. He was keen that local people and those from the wider area around here should have the chance to benefit from them.”

The collection now comprises more than 250,000 books, journals and pamphlets on a wide range of subjects but specialising in the core areas of politics, theology and literature.   At its heart, of course, is Gladstone’s own collection. Many of those 32,000 books he humped in his wheelbarrow contain his annotations, some of which are extremely detailed.  In addition to his books, the Library houses most of Gladstone’s non-political correspondence, speeches, and papers. Then there are the religious collections, illuminated manuscripts and gifts from the library’s supporters (the collection of writer and historian MRD Foot is the latest donation to the shelves).

The library’s beautiful quiet reading room, dining room and living room, complete with crackling fire and comfortable armchairs are a hub of activity and welcome some 23,000 visitors a year, from the curious tourist to scholars and writers who find the atmosphere conducive to great thought or productive scribbling.  Regulars come from all walks of life, from the Bishop of Blackburn to kids TV entertainer Timmy Mallett. “People say to us that they get more done in three days here than they do in a month elsewhere. Since 2000, we estimate that no fewer than 600 books have been written here” says Francis proudly, “and that’s just the ones we know about.”

But Gladstone’s is happy to welcome those who just want to have a look around (there are regular daily tours) to those who simply want to lose themselves in the serendipity of discovering what Virginia Woolf described as the ‘sunk treasure’ of a library.  “It’s a very browsable collection”.

But silence does not always hold sway. Indeed, the library is keen to encourage discussion and social chat. There are no TVs in the bedrooms (though there are gorgeously retro Roberts radios) so as to encourage socialising in the common area, such as the dining room or living room. The library also has an extensive events programme, with lectures, masterclasses, course in Latin and Welsh, talks and seminars.  A Writers in Residence scheme has attracted names like poet Wendy Coper, writer Salley Vickers and Gladfest, the annual literary festival in September, has been a huge success. True to the founder’s interests, the Library also has a theologian in residence scheme and is planning to set up one for politicians too.

The purpose of all of this, says Francis, is to maintain Gladstone’s legacy of engagement with social, moral and spiritual questions, helping people reflect more deeply on issues and ideas that concern them. It seems to be working. Last year the rooms had an 86% occupancy rate – a figure which most hoteliers would give their right arms for.

The library itself is still free to use, despite the enormous increases in running costs since the library was founded but today’s trustees consider this an important principle which they are reluctant to discard.  Instead, regular users are encouraged to become Friends of the Library, which in return for a regular fee gives them a range of benefits,  including being able to use the Library’s reading room till 10pm at night.

The Friends will be closely involved in the library’s plans for the future, too.  An exhibition area and a larger auditorium are on the cards, if the trust can raise the £5m it needs. Francis is confident it will, but it will do so in a steady unflamboyant way, without relying on major sponsors.  “We have always prided ourselves on being independent and we want to keep it that way.”