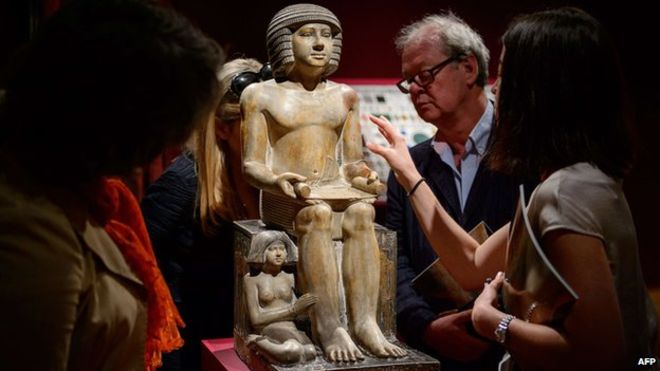 THE WORD A Brexit doomsday for UK arts?

With little over five months to go until Article 50 is triggered, the UK government’s White Paper appeared vague when tackling the nationwide concerns felt collectively across the continent. Although the paper seeks to allow the “continued mobility of talented individuals” and hints at a potential culture and education accord with the EU, it’s difficult to see how this could be implemented when free movement ends and visas are rolled out instead.

Main image: Sekhemka, the Egyptian statue bequeathed to Northampton Museum but sold by Northampton Council for £16m to fill a funding gap

At the forefront of concern for the arts and culture sector is how restricted access and limited movement of highly talented and creative people will impact the UK. The House of Lords released a report, Brexit: Movement of People in the Cultural Sector, to expose the shortfalls of staff Brexit will inflict on the industry.

This is because 4-5% of employees in UK art institutions and museums are from the EU, which rises to as high as 15% in larger institutions, according to the National Museum Director’s Council. In archaeology alone, 60% of workers in the field are European. Despite the government’s assurance that current EU nationals in the UK will be granted Settled Status if they apply before 2021, recruiters are growing anxious over their access to pools of expertise and talent.

Already the UK has seen many precedented creative brains absconding from the UK since clarity and certainty for the future never came. Those who have opted for a lucrative and fruitful art career beyond British shores include Sheena Wagstaff (former chief curator at Tate Modern, now at the Metropolitan Museum in New York), Chris Dercon (former director of Tate Modern, now at the Volksbuhne, Berlin, and the late Martin Roth (director of the V&A) who sadly died in Berlin last year. Their decision to leave the UK before the UK leaves the EU was wise, but the loss is ours.

Exacerbating recruiter woes, the UK government announced they will utilise the immigration system that is currently in place for EU migrants after Brexit, despite heavy warnings from many leading institutions.

This means that artists, curators, museum technicians and creative geniuses will need to apply for a Tier 2 Visa. Not only will this stifle creative collaborations across the Channel, but many innovative artists and heritage workers would find themselves exempt from this visa entirely: Tier 2 visas are only granted to applicants who earn over £30,000 a year.

Those who do qualify beyond the financial requisite will also face competing with other migrants from a variety of professions and expertise around the globe before the visa places are filled: Tier 2 visas are annually capped at 20,700. The scale of workers the UK needs after Brexit from a scope of backgrounds and skill levels extend far beyond this boundary, meaning most British industries that rely or supplement workforce gaps with European talent will struggle to meet demands.

If mountainous paperwork isn’t uninviting enough to EU employees, managers will also need to apply for a Sponsor Licence to legally hire from abroad. Not only is this process complex to navigate, it is costly in both administrative and financial terms.

However, relying on UK talent is simply not an option. Historic England estimates that the UK will need up to 64% more archaeologists by 2033 alone; Kate Geary from the Chartered Institute for Archaeology fears this could lead to a loss of staff and even a cliff edge for archaeology which would be “detrimental to the country’s heritage”.

Dwindling workforces and a loss of staff are just the tip of the Brexit iceberg for the arts. Years of austerity have plagued the sector and has been far from empathetic to its funding. The director of the National Theatre for over a decade, Sir Nicholas Hytner, claimed “draconian cuts” pressured councils into axing their art budgets altogether. Indeed, the Arts Council claims that between 2010-2015 the government cut financial support by 16.6%, impacting regions outside of London the hardest - especially in the North where a strained budget barely reached the corners, leaving handfuls of heritage centres, museums and galleries to turn into dilapidated cultural wastelands.

Local authorities up and down the country have been driven to flog their artefacts to plug gaps in their finances in the past; Croydon Council sold their ancient Chinese ceramics for £8m; Northampton Council sold an Egyptian sculpture for £16m; and Greater Manchester’s Bury Council will never be forgiven for selling LS Lowry’s A River Bankfor £1.4 million in a bid to fill a £10m hole.

Aggravating fears that councils could resort to selling their most prized treasures again, Creative Europe – a vital funding lifeline to UK arts that have awarded up to €74m to 334 cultural and creative organisations since 2014 – is also on the rocks. The programme is scheduled to continue until the end of the Brexit implementation period (December 2020), but in a “no deal” scenario, the UK will immediately withdraw from the EU and, crucially, the funding scheme. Although the government has pledged to pick up the bill in such an event, industry experts such as Bernard Donoghue, the director of the Association of Leading Visitor Attractions, alongside Stephen Deuchar, the director of Art Fund, are not so optimistic that funding will follow; especially when public spending and the economic purse is tightened post-Brexit.

‘The boundless prospects, opportunities and cultural diversity Europe offered are fading into the backdrop of restrictive visas and mounting paperwork’

If austerity snatched our treasured art works and bit at the heels of our heritage, a weaker pound will only serve to attract overseas oligarchs to strip our galleries for themselves and at a much cheaper rate. Local councils will have little choice but to bend to demands. The odds against Northern museums, galleries, exhibitions and heritage centres surviving on governmental budgets is bleak at best. Even Hytner claims beyond the capital the “situation is looking really grim” for Northern culture and its artists.

Not only is the mobility of staff integral to the survival of culture in the UK, but the British art scene has for years collaborated with its EU partners when lending and borrowing cultural objects. British music has long celebrated its love affair with Eastern European influences, while dance troupes rely on tours in the EU to earn a living wage. Similarly, contemporary artists showcase their marvels around the EU and UK, touching and inspiring the minds of millions around the world. According to Arts Council England, over two-thirds of their funded organisations work internationally.

The boundless prospects, opportunities and cultural diversity Europe offered are fading into the backdrop of restrictive visas and mounting paperwork. Smaller organisations that lack the administrative capacity and financial support when tasked with moving equipment, funding and organising visas and then scheduling exhibitions before the visas expire, in addition to obtaining tour licences and freight to ship art works and props, could be driven to the edge.

The government desperately needs to negotiate an EU-UK wide working visa for the entertainment and culture sector, irrespective of a deal or not. Without a proper immigration plan, the UK’s cultural landscape is missing some crucial landmarks. Art that survives the pawning off process will be few and far between.

Without the continuation of cross-border collaborations, creativity will become diluted and museums outdated. Institutions bracing themselves for “doomsday” and beyond will wobble in its uncertain winds while the UK’s world-class reputation as an innovative cultural hub will vanish in its wake.