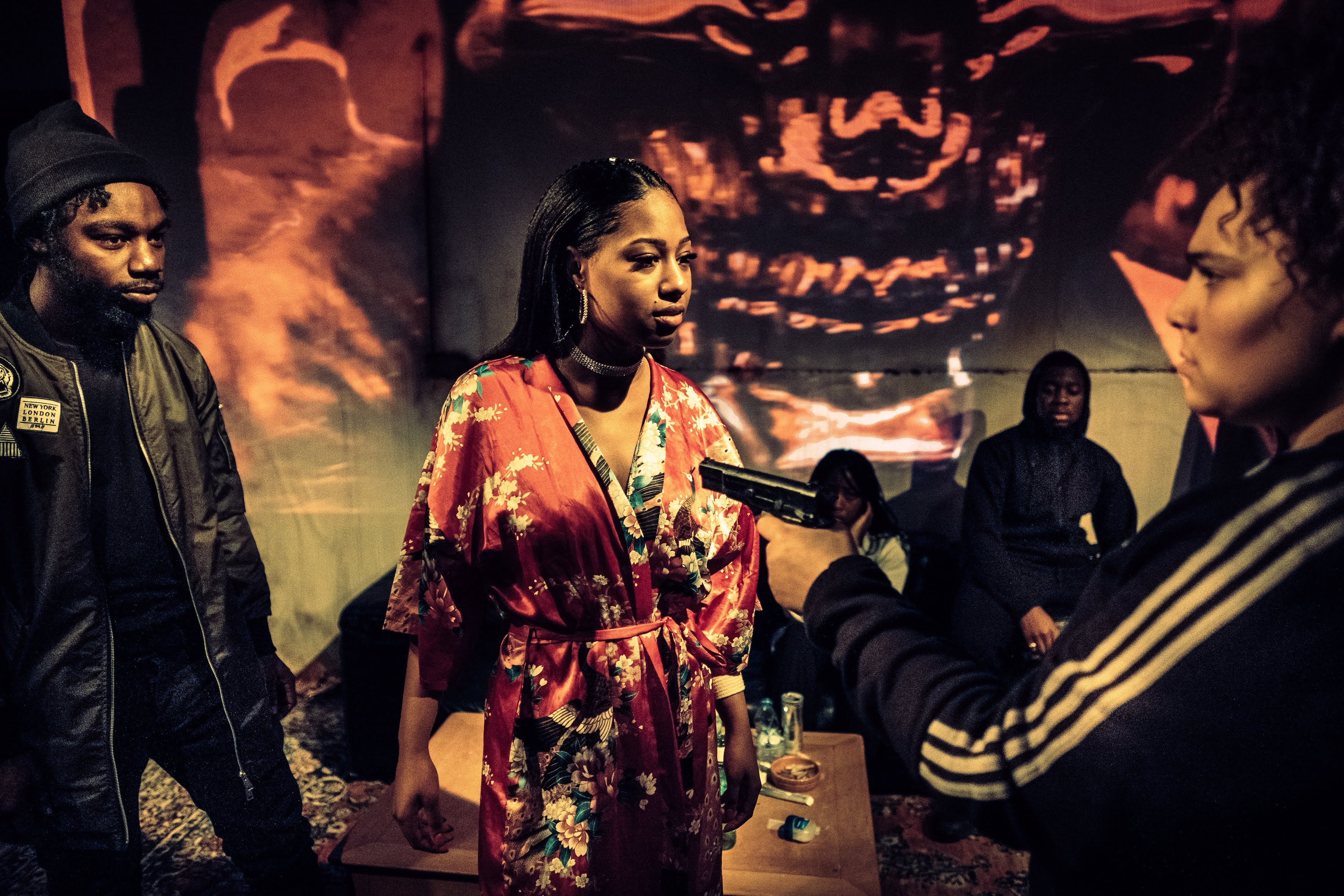 Bullet Tongue and the red raw world of excluded teens

County Lines is the system drug dealing gangs have set up to operate outside their usual manors, targeting vulnerable adolescents as their agents. It’s a critical problem for our excluded young. The play Bullet Tongue (main image by Dylan  Nolte) tackles the issue head-on, with an extra dimension of reality: many of the cast of 17 have been part of County Lines, one of them still is.

The production is the latest from The Big House, and the first to be presented in the company’s new Islington home, a former framing factory. The play, which runs until December 8, has already had supportive reviews despite its visceral storyline – “Authentic and powerful” said Time Out, “Ferocious and powerful” said The Stage.

The actors are all in their teens or early twenties, many of them care leavers at a high risk of social exclusionwho had been foundering in the real world before being scooped up by The Big House and its founder and artistic director, Maggie Norris.

To those familiar with the underworld, “the big house” is prison and the argot has been borrowed from to give an alternative meaning – somewhere safe. “The Big House is a place for people who have nowhere to go and who feel they don’t belong. It’s like a family” one of youngsters tells its website. “It allows us to show the world we’re not just kids from care, that we have feelings and dreams like everyone else” https://thebighouse.uk.com. Too often for these young people the place that seemed to be where they belonged was prison, but drama is their escape route.

“For us” Norris says “drama is a tool to develop their confidence and self esteem, communications skills, ability to trust others, reliability, punctuality. We’re working at a very high level, so the theatre we present requires them to become a disciplined team, and they take skills forward afterwards.

“It has a ripple effect on the community here, peer-on-peer mentoring, such an important resource.”

Those skills now are earning income for the charity throughBig House Means Business, in which the youngsters travel the country giving leadership workshops to corporate organisations such as Barclays Bank on subjects such as empathy. That is, kids from traumatic backgrounds teaching bankers how to be leaders. 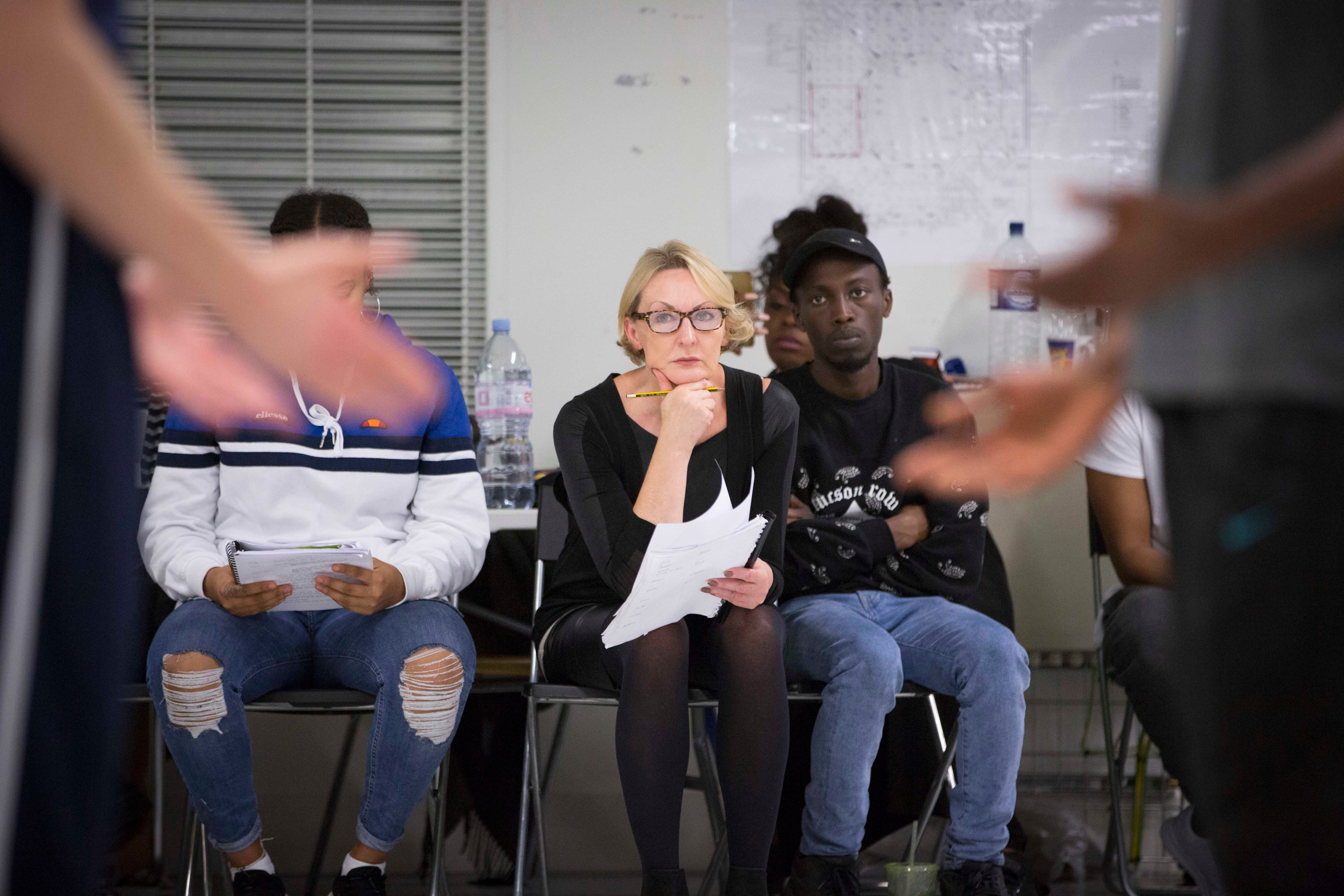 Maggie Norris, who directs Bullet Tongue as she does most of The Big House productions, started working life as an actor – for some years she was Claire Palmer in Coronation Street – and turned to directing before starting The Big House in her kitchen, and her story is as picaresque as some of her storylines.

She was a small child when her father Brian Norris, a Communist Party member and former Methodist minister, decided to uproot his family from Bolton and moved them to East Germany where he taught English at university in Halle, with his children going to German schools. After two years, however, the scales fell from his eyes and they returned. “Going to the GDR was a huge shock, and the experience had a profound effect on me – including a deep distrust of systems” she says. In 2007 the story made a film which she produced,Mrs Ratcliffe’s Revolution, starring Catherine Tate and Ian Glen.

She did a degree in theatre and dance but was never formally drama trained. Her first job was with a small community theatre in the West Midlands for whom she acted, danced and played the saxophone, and became a writer after a visit to Israel’s West Bank which resulted in a play, Long Division. “I was pretty shocked no-one here knew about what was happening”, and the play opened up new opportunities - including at one stage writing musicals, most notably Hot Stuffwhich had a West End run and at least 30 productions.

She turned to directing, and her stage version of the TV series Bad Girls, about the inmates of a female prison, also made it to the West End. Crucially, it took Norris into prisons for research, giving her career a sharp turn. Norris asked to become a volunteer with Only Connect, the charity devoted to rehabilitation projects for prisoners, and was asked to work with eight Wormwood Scrubs inmates, mostly young.

It was when knife crime was starting to become endemic, and she developed a play for her group – half of them had been stabbed at some time. “We didn’t use their personal stories, but we allowed them to use their experience and channel their emotions about what had happened into the play” she says. “It was then that I realised how therapeutic play-making could be for people with low self-confidence, particularly if depressed as well, and marginalised, lacking aspiration, maybe isolated, but also showed them trust which most people take for granted”, and Only Connect asked her to be its artistic director.

In 2008 she put on Only Connect’s first public presentation with the play Any Which Waywhich was glowingly reviewed by the Evening Standard– “Any Which Waybursts into the playing area with a violent thrust, a blaze of insult and argument” – bringing a sell-out audience.

“The thing grew and what I saw was just how incredible the effect was on the cast and their self-esteem, very moving” she says. “For some of them it was the first time anyone had applauded them for anything in their lives”. Working in Wormwood Scrubs, Pentonville and Feltham Young Offenders Institute, Norris developed ways of working with offenders, including a large production with 30 inmates in the great chapel in the Scrubs, presenting Badman Christmas, a version of A Christmas Carol. “I realised that care leavers make up this incredibly vulnerable group and that I needed to work with them” she says.

The figures are stark: 41% of care leavers aged 19 are not in work or education; they are four times more likely to commit suicide; 20% of them have been homeless; 40% if all prisoners under 21 have been in care. There are 90,000 children in care in the UK in any year

It was founded as a charity in 2012 and funding comes from trusts and foundations, from earnings and from donations. It was kick-started by a single donation of £50,000 from an individual, so an office could be established and some staff could be hired.

But Norris had long seen the need for a building that could offer both a notional home and also earning potential, and The Big House moved into Englefield Road earlier this month. It has no conventional auditorium, Bullet Tongue is a promenade event like all Norris’s shows. What is needed is sound and lighting systems – all plumbing and electrical installation has been done free of charge by a local business, Mala Engineering, as sponsorship in kind – and a kitchen. “Every home has to have a kitchen, it’s where you talk” Norris says. She needs to raise up to £200,000.

Young people are sent to The Big House from a variety of sources, including leaving care teams, youth offending teams and the probation service, “but one of biggest referees is young people, because they know who really need our support”. It works with other charitable agencies as well as institutions like the Roundhouse and the National Youth Theatre.

of dropping in on Thursday evenings followed by three months of intensive support and then 12 months of working on productions that emerge from them, before, the hope is, moving on to employment or into education. There is no structured drama teaching, the language is one The Big House inhabitants would not understand, but there is close mentoring provided voluntarily by a trained psychologist, Sam Herman.

They come bearing baggage from childhoods of abuse, neglect or family breakdown. “There’s a lot of shame attached to being in care, so what The Big House does is unpack that baggage and make young persons feel great about who they are, to develop aspirations, put them in a place they can meet other people with similar experiences” Norris says. Out of the drama they learn basic life skills, like budgeting, housekeeping, registering with doctors, but then how to manage anger, how to approach potential employers, how to make and keep friends.

And Norris becomes personally involved. A couple of years ago a young woman was in court facing eight years for drug offences, and The Big House’s founder laid before the judge a five-page report on her potential. The judge was convinced, and a few months later the young woman was starring in the Royal Court’s production of Knife Edge, directed by Norris.

And an even bigger success is the star of the next Netflix series of Top Boy, due to air next year. Jasmine Jobson had been labelled “the most difficult child in Westminster” by social workers - “I was selling drugs, causing trouble with police, on the streets, but I could see my behaviour was hurting people”. In 2013, though, she joined The Big House and appeared in its first production, Phoenix.“Jasmine was very difficult, she had huge behavioural problems and anger issues as a result of trauma growing up” Norris said at the time. “She’s been able to channel that into the play. She has an extraordinary talent”. Now that talent has made it to Hollywood, with a pay package negotiated by – The Big House.

“You have to be able to fight for these young people who’ve had unimaginable trauma, kick doors down for them, so it’s me that goes to court, or to the universities to persuade them to take someone without GCSEs, and they usually do. Like a parent.

“But we one thing we never do is give them cash – we can’t allow them to become dependent. We’re here to make sure they can learn to make it on their own, through drama.”

The Big House is at 151 Englefield Rd, London N1 3LH, on the corner with Essex Road. https://thebighouse.uk.com