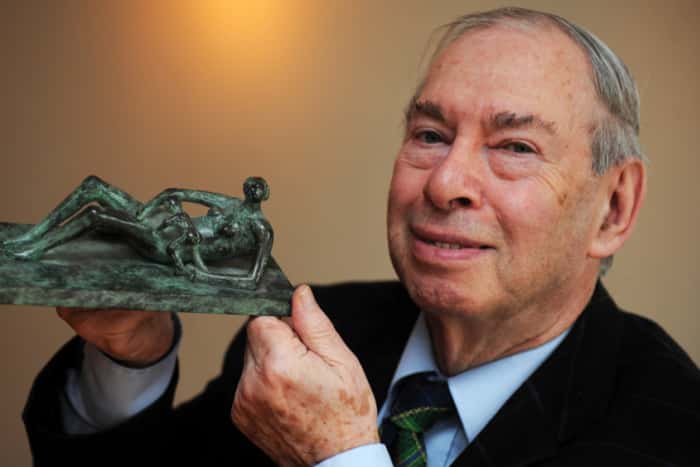 TALK OF THE TOWN HALL But they persisted….

Former councillor and local GP Jeffrey Sherwin died last week. His is hardly a household name, even in Leeds where he once served as chairman of the city’s leisure services committee.

Leeds is now acknowledged as one of the most culturally committed local authorities – a front runner in the abortive European City of Culture race in 2023, recently designated by National Geographic as one of the 19 “must-see destinations” for 2019, largely on the strength of its arts offer. And it has also won praise from Andrew Dixon, eminence grise of Hull’s successful UK City of culture bid, as one of the top councils for culture in Britain.

Image shows Dr Sherwin with a Henry Moore from his collection

But it hasn’t always been so. The Leeds Renaissance didn’t just happen. Its current reputation as a “cultural powerhouse” rests on the often unregarded work of people like Jeffery Sherwin. It was Dr Sherwin who played a major role in bringing the Henry Moore Institute to the city, helped found the Leeds Civic Trust and chaired the Yorkshire Arts Association. A keen art collector himself, with an enviable collection of British surrealist works, Sherwin would no doubt be today regarded as a member of the “elite” whose every utterance should be regarded with suspicion.

Indeed, some of those with long memories of municipal politics at the time will recall that Sherwin, a lifelong Conservative, was often a lone voice on the benches of Leeds Town Hall when advocating investment in the arts.

Most of the self-made men, wealthy farmers or staunch trade unionists who made up the ranks of West Yorkshire’s councillors, had little time for such fripperies. Political fortunes were made on building housing, new roads, bus stations and shopping centres. There were no votes to be had in persuading a renowned sculptor to donate his work to his hometown region, no-one was going to mention Henry Moore’s name on the doorsteps of Hunslet or Headingly.

But Sherwin persisted to defy such political wisdom, and because he did, Leeds now hosts one of the foremost galleries and places of learning for modern sculpture in the UK, a jewel in the cultural crown, alongside such gems as Opera North and West Yorkshire Playhouse.  All of which contributes to tourism, encourages inward investment, sparks creativity and makes the city “a more vibrant and eclectic place to live and visit”, in the words of Leeds’s current council leader Judith Blake, who led the tributes to Dr Sherwin.

Persistence like this is the hallmark of cultural champions. Sceptics were abundant when Mick Henry, then leader of Gateshead Council, together with his visionary chief executive Les Elton, decided that culture would be the generator of the city’s revival. The conventional wisdom said manufacturing alone could save this industrial city from seemingly unstoppable decline, but Henry soldiered on, making alliances with the dreaded rival across the Tyne to bring an extraordinary level of cultural investment to the city.

Their view was that businesses would only be tempted to set up shop in Gateshead if the area had new reasons to be cheerful – and the Angel of the North, the Sage concert hall and the Baltic gallery would restore pride in Gateshead, even amongst those who not be regular audiences. Now that these cultural icons are part of the modern North East, the naysayers are forgotten, their pragatic arguments buried in history’s dustbin.

When Southwark Council’s own dustbins no longer needed to be kept on the Thameside depot where they had been stored for decades, the ”sensible approach” would have been to allocate the site for housing, not put up a facsimile of Shakespeare’s Globe theatre, as actor Sam Wanamaker wanted. But the then leadership of the council, after much argy bargy and condemnation from in and outside their own ranks, plumped for the mad plan to build a theatre. The theatre is a global hit, while the housing would almost certainly have been gobbled up by the wealthy renters who now dominate the rest of the riverside.  What price the political consensus now?

So what’s the lesson to be learned by today’s cultural champions in local government?

They may feel even more beleaguered right now, as a decade of austerity and cuts reduces local authorities’ room for manoeuvre even further. But the truth is that there has never been a good time to be an advocate for the arts. There is and was always a “better” use of scarce resources, always a pragmatic alternative, always a popular choice.

Don’t listen to the siren voices, stick to your guns, keep going. In the end, passion pays off and the transformative power of the arts will be the ultimate persuader.