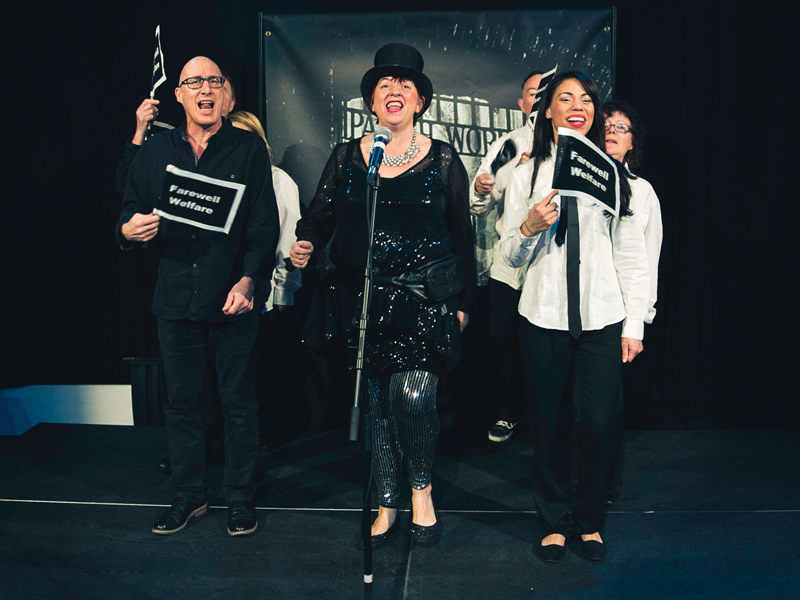 Arts with the sleeves rolled up

Local cultural services are bearing the brunt of the cuts, but arts development workers are finding other ways to support grassroots culture. Patrick Kelly reports

February is budget time in town halls across the country, and as local government’s arts workers gather in Norwich for the annual conference of AD:UK, no one is in any doubt that the news will not be good. A further round of cuts and closures in culture is inevitable, as central government funding for local services drains away.

Chancellor Osborne, like his predecessors, knows that the neat way of deflecting blame for austerity is to frontload service cuts to local authorities and then blame them for the decisions they make. Some of the reductions in funding have registered on the national consciousness, especially when they affected larger scale professional organisations, though much remains under the radar. But overall, it’s a tried and tested political scam, which receives little attention from a London-centred media.

So, surprisingly, the mood at Norwich’s historic St Andrews Hall is expected to be, if not upbeat, then practical, as delegates from across the arts development world concentrate on new ways of delivering culture at the grassroots.

Many of those delegates will know from personal experience that there are alternatives to local authority finance. “It’s the people delivering it on the ground that matter to us rather than the employer, and now our members come from a whole range of organisations, not just local authorities” says AD:UK’s chair, Jane Wilson.

“AD:UK calculates that 40% of local authority arts services have gone over the last few years. But many of those services have been outsourced and AD:UK members are often supplying arts development as contractors. The challenge we are addressing at conference is how we support all our members to engage with their local authorities on the issues that matter for arts development, whether or not they are employed, contracted, grant aided, or have no direct relationship at all” says Wilson. AD:UK members have become well versed in seeking other sources of funding.

Central to the conference is the work of culturalcommons.org, a joint venture with Voluntary Arts, which seeks to  looking at example of best practice and how to promote them. That collaboration, now 18 months old, seeks to “explore new ways to sustain and develop the creative lives of our communities in all their diversity. Ways based on the assets we already know we have and can deploy rather than beginning with a deficit in what we have lost or never had”.

AD:UK secretary Pete Bryan says that local arts development is going back to the days of community arts infancy for inspiration, when committed people could set up arts initiatives in their own backyard. He cites the example of the annual music festival on a rugby club playing field near his home village.

“We need to think outside the box.  I am not saying that there will be no need for public funding but it would be complacent if we continued to support the model developed over the last 30 years.”

The conference will look at some examples of that thinking outside the box.  Case studies will be pored over in some detail. They include Liverpool’s Collective Encounters theatre company which works with homeless people or Made in Clayton West, where a village of 2,000 people in West Yorkshire has taken on the task of organising their own arts activities including singing, music and visual arts. There will be a talk on Lincolnshire One Venues, the network of venues in the rural county who work together on programming, marketing and developing young audiences.

It’s a point taken up by Robin Simpson, chief executive of Voluntary Arts, which represents thousands of arts groups which have never received any public funding. However, he says “they are affected by changes to the infrastructure of arts funding, for example the closure of local authority facilities”. The cuts in local government have also meant that councils are increasingly demanding commercial rents for the hire of facilities which were once available to arts and crafts groups at very low cost.

“It’s in this context that we have had to look at other ways of doing things – so we have been broadening our collaboration with other groups not normally associated with the arts, to see whether existing facilities can be sued more effectively.”

And there will be a lively presentation from Sarah-Jane Rawlings and Stella Duffy, co-directors of Fun Palaces, the from-the-ground-up festivals of arts and sciences in the unlikeliest venues, from domestic front rooms to bus shelters.  Duffy and Rawlings will insist that their project is about more than the “Let’s do the show right here!” spirit, but is designed “to change the way the arts and sciences are currently owned and created”.

There will also be talks on creative forums in market towns, the roll-out of the Arts Council’s Local Cultural Education Partnerships and a coach trip to Great Yarmouth to see how arts, culture and heritage are being used to regenerate this seaside resort and port town.

And there will be a major discussion about cultural commissioning, which is an alternative vision of public funding. In this scenario, support for the arts comes not from local government, ACE or the DCMS, but from other parts of the public spending purse – including the NHS, housing, social services and crime prevention agencies like the police.  Kent and Warwickshire have already pioneered work in this area, says Pete Bryan, and there are models which other arts organisations could usefully follow.

“Progress in this area may be slow and arts people may need to learn a different language but it has been successful in planning world” he says, pointing to the support for public art engendered by schemes such as Section 106 agreements, where developers pay for arts projects as part of their planning permission.

The atmosphere then, say Jane Wilson and Robin Simpson, is not one of moaning about the cuts, though the Chancellor will find few supporters for his cuts at the conference, but one of “rolling up our sleeves and getting on with it”.  There are not many other options.