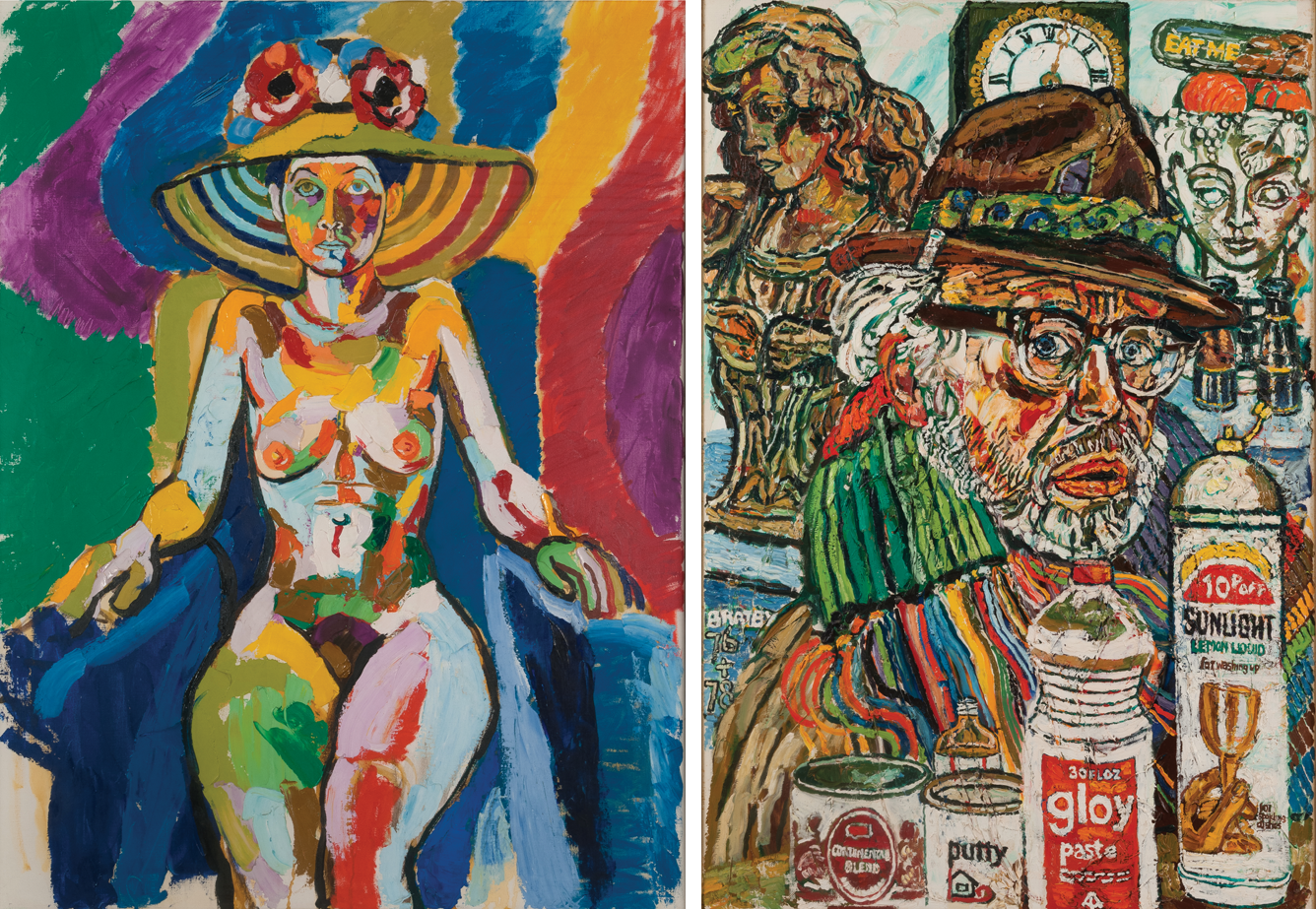 Coming in from the kitchen

Public demand has inspired the exhibition of the work of John Bratby at the Jerwood Gallery in Hastings, his first retrospective. Simon Tait was given a tour by gallery director Liz Gilmore

Posterity’s judgement on the painter John Bratby is at best mixed. His work is recognisable: heavily expressionistic realist renderings of domestic scenes and portraits often in heavy impasto. He was fêted in the 1950s as the leader of the “Kitchen Sink School”, as critic Sylvester christened a social realism group of young painters that also included Edward Middleditch, Derrick Greaves and Jack Smith. He was a Royal Academician and in 1958 provided the art for the Alec Guinness film about an eccentric painter, The Horse’s Mouth. The Queen Mother sat for him and he is thought to have painted over 3,000 works, many in public collections.

But he was a difficult personality, who drank too much and was obsessed with making money, and while another critic, Andrew Lambirth, called him “a monster who possessed great talent” his biographer, Maurice Yacowar, opened his 2008 book with “John Bratby was an overachiever who fell short of his potential”. These days you can buy a Bratby drawing for £500, and even one of his monumental paintings at auction for as little as £10,000. He died in 1992 aged 64 and there has never been a retrospective exhibition of his work, until now.

For despite the largely negative critical view of his work these days, John Bratby seems never to have lost his appeal with the ordinary public, and the exhibition now on at the Jerwood Gallery in Hastings is the proof. It has been mounted, quite literally, by public demand.

Bratby lived in Hastings for the last 16 years of his life, and since the Jerwood opened in 2012, says its director Liz Gilmore, there have been regular requests from Hastings people for an exhibition about him. She decided to appeal locally through the gallery’s newsletter for people to “Bring us your Bratbys”, and in September they brought an astonishing 120, all owned privately and from this part of the south coast.

“Getting works for an exhibition from private sources isn’t unusual, but what’s been different is that we’ve got a broad range of people offering their pictures who are not professional collectors” says Gilmore.

The BBC came along to the event, and the local appeal suddenly became national. Bratbys turned up in all parts of the country, and there is one delightful drawing, a self-portrait, in the exhibition from New York. Altogether more than 300 pieces turned up, which a panel sifted through to select a fair representation for the Jerwood’s Foreshore Gallery.

As it happened, it was too difficult to discard enough and the exhibition fills almost the whole of the gallery. There are 66 paintings and drawings, mostly from ordinary people.

“The idea was of how to do an exhibition that was locally relevant and nationally significant” Gilmore says. “At the beginning of each year we often do an exhibition with local interest or focus, not necessarily local artists but artists that have connections with Hastings or a personal link  – we had Chantal Joffe last year who spent time in Hastings and did portraits of people here. And we try to contextualise artists represented in the Jerwood collection – we have three Bratbys – and the fact that he lived just up the road for the last few years of his life made it seem the right time.

“We wanted this to be, absolutely without compromise, a really exciting exhibition. It came about because people locally owned Bratbys and since we opened four years ago probably 12 individuals have come forward and offered to lend them to us, so there was clearly great interest.”

The range in the 66 selections is a surprise, both in terms of subject matter and quality. “The irony is that we haven’t actually got a kitchen sink in the whole show” says Gilmore, but several picture define the genre. Sylvester’s original quote about it was that it  “includes every kind of utensil and implement, the usual plain furniture, and even the babies’ nappies on the line” he wrote in 1954. “Everything but the kitchen sink? The kitchen sink too”. There are plenty of representations of the genre here, such as Rain in June, driven by its owner from Walthamstow, which shows a bathroom (identified by Bratby’s son David as his grandparents’). From another private collection comes the image that first made him famous, Still Life with Oranges; there are his candid nudes, and the stuffed animals Bratby had a passion for, including a magnificent lion’s head; the panel was divided over the cockerel that came from Brighton because it included the American flag and they were not sure of what Bratby’s point was (they decided there wasn’t one – he often used flags in his background because there was one in his studio).

His Three Lambrettas and two Jeans triptych featuring his first wife, the painter Jean Cooke, inspired the cover for Mark Knopfler’s 2007 album Get to Kill Crimson. And another surprise, his Venice paintings: he lived there for a while on a bursary. There is a representation of his Hastings living space in the Old Town, his sideboard which he painted to test tinctures, his noticeboard covered with photographs and letters often from public figures declining a portrait, his easel, also painted, and on mannequins the clothes he bought for his second wife Patti to wear when she modelled for him.

And then there are his portraits. One of Bratby’s least likeable qualities was his pursuit of money, even though he was successful enough financially. He had a phase of writing to celebrities offering to paint their portraits, knowing that if they sat for him and didn’t buy the result he could sell them elsewhere. Paul McCartney came from his Sussex home for a short sitting from which Bratby made three versions, none of which McCartney bought but all of which were sold: two are here. They were done extremely quickly - Claire Rayner, Malcolm Bradbury, Michael Palin (who said he hated it but bought it anyway), Julian Lloyd Webber - and, with some exceptions, are not good. In one of Lord and Lady Attenborough his rather glum subjects are set against three self portraits lurking in the background.

The Jerwood Gallery celebrates its fourth anniversary on March 12 and has had a series of impressive exhibitions that place it in a unique position as a local gallery with a national outlook – John Piper follows Bratby. It is entirely independently funded with a modest admission charge. It gets 45,000 visitors a year now, a figure Liz Gilmore hopes grow to 100,000 soon.

With this people’s show of a controversial but loved national and local artist the Jerwood is stating its place as a gallery of international standing that is a local resource and landmark. John Bratby died a few yards away from where it stands now, the day after his 64th birthday on the way home in the rain from his favourite fish and chip shop.

John Bratby: Everything but the Kitchen Sink is at the Jerwood Gallery, Hastings, until April 17.