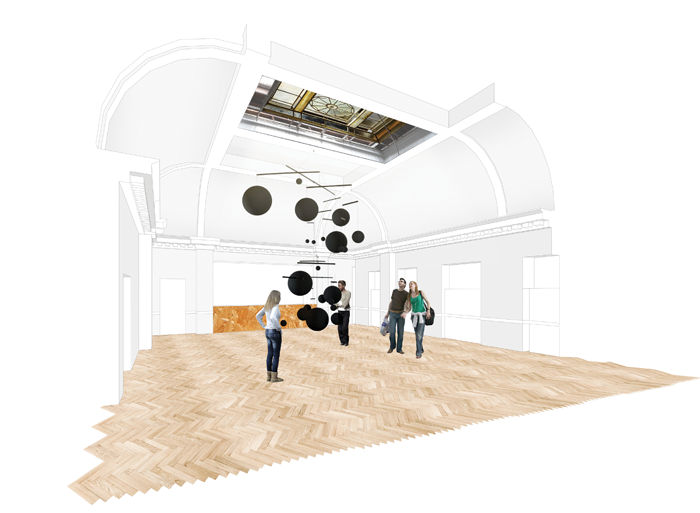 The large building almost opposite Wood Green Tube station is an unassuming four storey Art Deco pile identified on its face by five green plaster panels. The middle one declares “Northmet” -  The Northern Metropolitan Power Company – and the others explain “Lighting”, “Heating, “Cooking” and “Power”.  The ground floor frontage is clad in the same municipal green.

The modest appearance of 13-27 Station Road, Hornsey, is deceptive. Almost nothing is known about its history except that it was built in 1925 for Northmet, architect and builder unrecorded, and in 1963 it was taken over by Haringey Council to be its municipal offices until five years ago.

Yet it could be London’s version of Manhatten’s famous Chelsea Hotel, home at different times to the likes of Janis Joplin, Dylan Thomas, Sid Vicious and Brendan Behan.

In May, 13-27 will reopen as Green Rooms, devised and designed as an artists’ hotel with beds for as little as £18 a night. It will have a bar, a restaurant which will also be an incubator for young restaurateurs, a large foyer with a performance space, and a large top floor rehearsal/exhibition space that will also be available for locals to use. There will be some en suites for up to £60 a night and a couple of longer term ateliers with mezzanine workspaces.

Behind the project is Nick Hartwright (right), 39 and from Leystonstone, who is a social entrepreneur. He made his fortune designing and selling rugs through his The Mill Co Project, but since 2010 has put his ingenuity into taking unused buildings on short leases to create artists’ studios, mostly in London’s East End.

“When creatives come to London to work in theatre and music there’s nowhere for them to stay, hang out with people of their own sort and have the kind of conversations that turn into projects” he says. “What there is is either really poor or very expensive.”

He began with his The Mill Co Project partner Claire Martin with a warehouse in Bethnal Green which they turned into a gallery space, then switched to studios – they now have eight sites. The notion of somewhere to work and maybe somewhere to stay has grown into “somewhere to stay, meet, rehearse and develop ideas” he says. “I took one look at this place which Haringey Council was looking for a new use for, and I knew I had the place”.

The Green Rooms project is almost a paradigm of modern cultural entrepreneurships, based on layers of partnerships. He has the building on a minimal long-term lease from the council which has also committed £40,000, and the support of the Greater London Assembly’s High Street Fund with £140,000.

Hartwright has put his own money in, and there’s investment from the entrepreneur Kurt Bredenbeck, founder of the now fashionable Hoxton Hotel, as well as from angels such as the ClearlySo impact investment firm whose modus is to deliver social or environmental impact as well as financial profit.

In fact, the hotel is being created for under £1m, Hartwright says, through using teams of specialists rather than a single contractor which has probably saved £2m. He also negotiated extremely favourable terms with the architects, SODA, the young West End partnership whose success with other projects allows them to charge only a modest fee with a social enterprise such as this; it’s the same with Hypnos who is designing the beds.

The existing building, fortunately, was built to high specifications, an early and uncomplicated steel box frame in which there are no asbestos complications. The council had covered the oak parquet floors and hung false ceilings over the plaster mouldings in the main rooms and mahogany roofed former warehouse spaces, and all this is being restored. But nothing had been thrown away – except for the cage lift – so the old banisters and brass window handles are being restored too, and some 1920s enamel hanging lamp shades with giant bulbs will also have a new life.

Although there are 22 double bedrooms, there also are two dormitories, one with 16 beds and the other with 18, and communal toilets for men and women. There are also twin beds for disabled artists who come with carers. “It’s basic but good accommodation, and people will be socialising in the shared areas most of the time” Hartwright says. “People are much more into sharing spaces now”.

The ground floor, once a showroom, will be a large foyer for reception including a bar and a restaurant which will double as a training school for young restaurateurs.

On the fourth level is Hartwright’s favourite space, once Northmet’s boardroom which had a bar at one end, and beneath the false ceiling his team found an exquisite engraved glass skylight which is being restored to be its centrepiece. “It’s when I saw this room I knew what we had to do” he says. It will also be available for use by local people.

Green Rooms has had no advertising and as yet has no general manager – a fine pedestal desk found in the basement is being restored ready for whoever is appointed – but already it is booked through May, June and July by word of mouth and contacts in, for instance, The Barbican Centre and the Royal Court Theatre. “It has to be somewhere creative people believe is for them, but where local people can feel comfortable meeting artists” Hartwright says.

“There’s a change in the way people are thinking about business and the arts, and at the same time a new way that young artists are thinking about their work that’s about what’s going on around them and how they inter-relate with other people” he says. “We can bring all that change together here.”