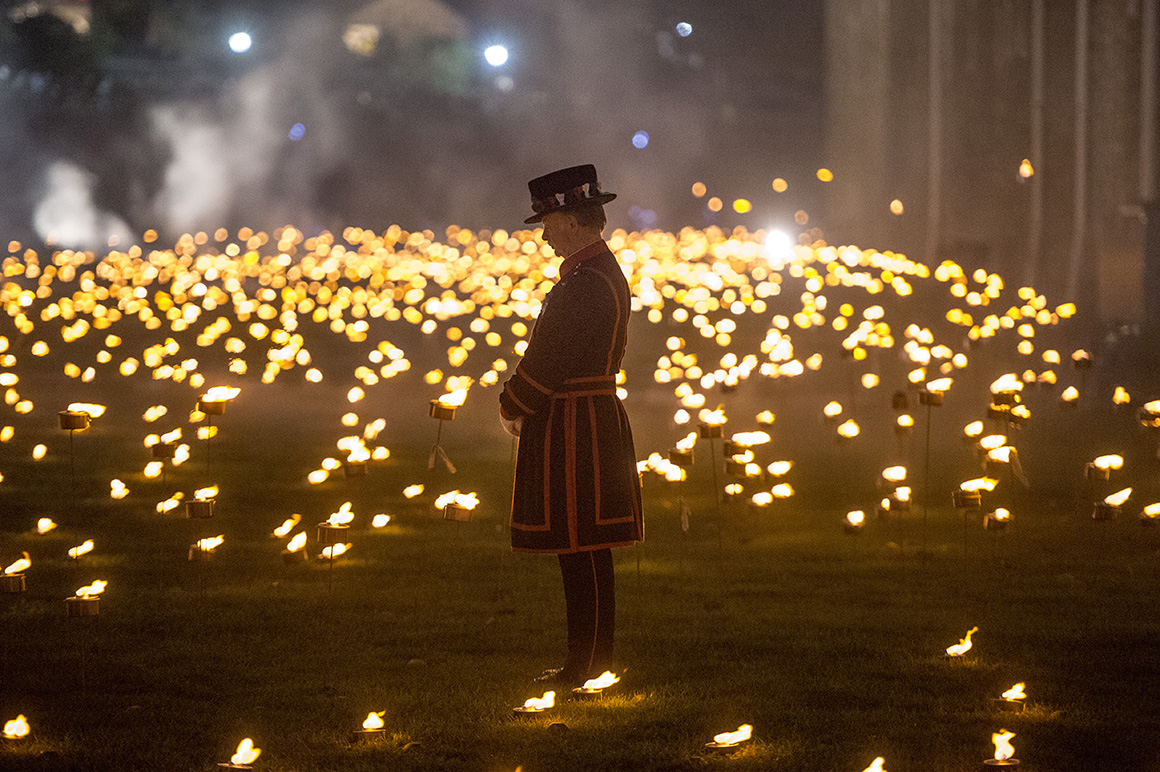 Beyond the Deepening Shadow, The Tower of London, November 2018, by Jeremy Selwyn

Working for an evening newspaper as a photographer must have its drawbacks, and having to get up in the early hours is often one of them. It must seem that all the pictures you take are disadvantaged because of the absence of light, because you will either be working before the sun has risen of after it has set.

Jeremy Selwyn is a veteran photographer working for the London Evening Standard for 40 years. He has experience that allows him to cope with all of nature’s circumstances.

Dispatched by his picture editor to the Tower of London to photograph a new installation Beyond the Deepening Shadow: The Tower Remembers, he was unsure of what he would find. The installation, atribute by designer Tom Piper and sound artist Mira Calix, would fill the moat surrounding the Tower with thousands of individual flames, a public act of remembrance for the lives of the fallen, honouring their sacrifice.

“As the nation was in the midst of remembering the centenary of the Great War I arrived at dusk into the moat below the Tower” Selwyn says. “I really wasn’t expecting it to be so well attended by the public, and as the Yeoman Wardens arrived the moat fell silent. A team of volunteers lit the candles as darkness fell.

“A mixture of smoke and light from the installation hung over the moat creating an atmosphere I had to capture.

“Covering the Deepening Shadow at the Tower of London last November bought a lump to my throat as I watched the ceremony unveil. The Yeoman Wardens stood still surrounded by flames, heads bowed in remembrance.

“I had to take a long exposure to capture the smoke and light in the background handholding my camera as, typically, I had no tripod (actually I don’t own one).

“The images were as I wanted, but as I edited them, trying frantically to find a sharp one, you couldn’t help but think back and what a privilege it had been to be there.”

Jeremy Selwyn’s picture and other images from the Evening Standard are available through Fleet Streets Finest, https://fleetstreetsfinest.com/photojournalist/jeremy-selwyn/