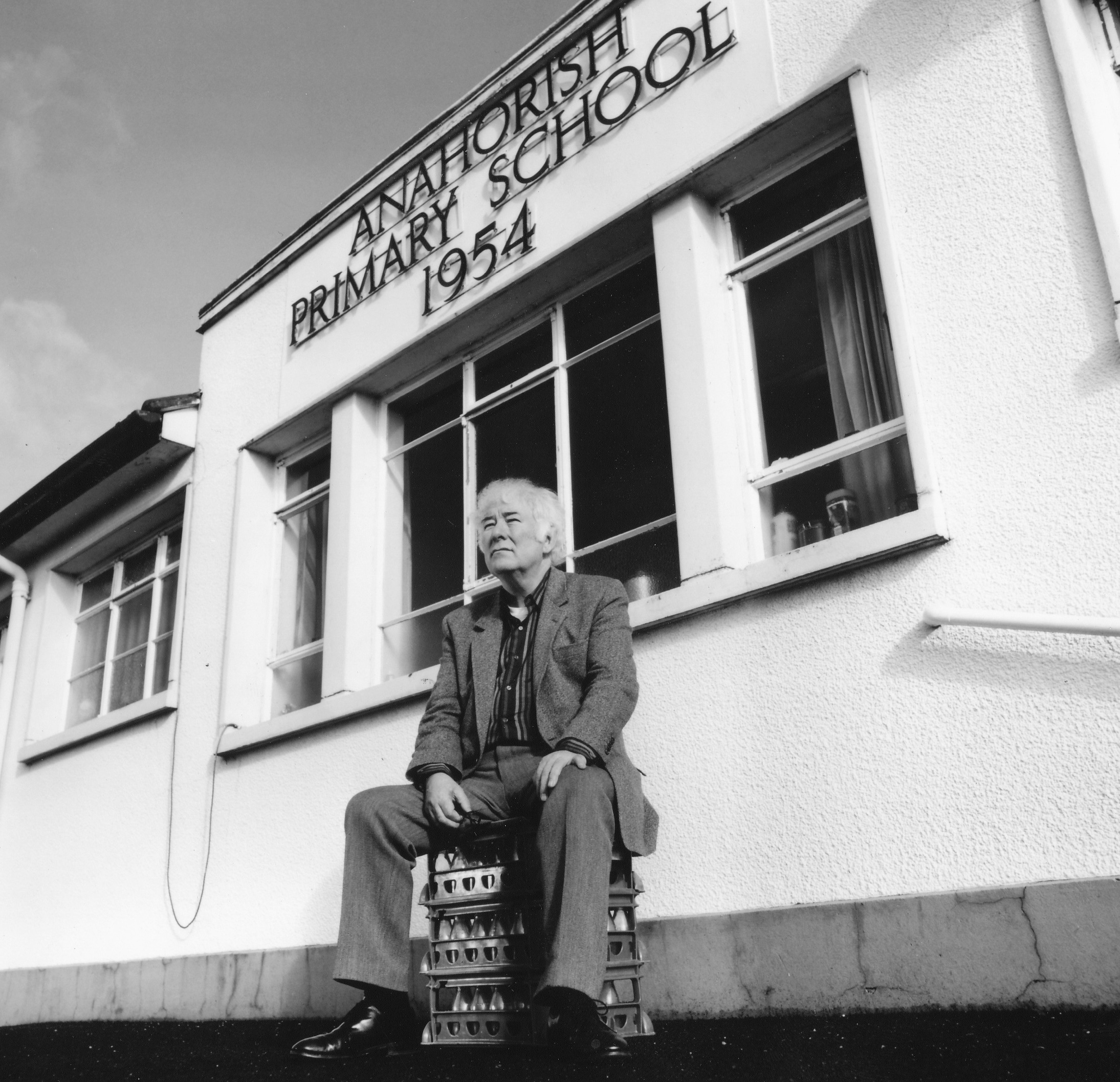 Seamus Heaney would have been 80 on April, and his hometown of Bellaghy in County Derry didn’t forget. Simon Tait was there

Seamus Heaney’s brother Hugh sums him up better than anyone. “Seamus’s feet never left the ground” he says “and you could nearly say he never left Bellaghy”.

He did leave and since the mid-1970s had lived in Dublin, but he was such a frequent visitor it’s as if he was never away. He never saw Dublin as being in another country. His large family – he was the eldest of nine – mostly lives here, and people still find it difficult to refer to him in the past tense more than five years after his unexpected death. He was rooted here and is still a huge presence. The picture shows him outside his old primary school here, Anahorish, just out of Bellaghy down the Deerpark Road. 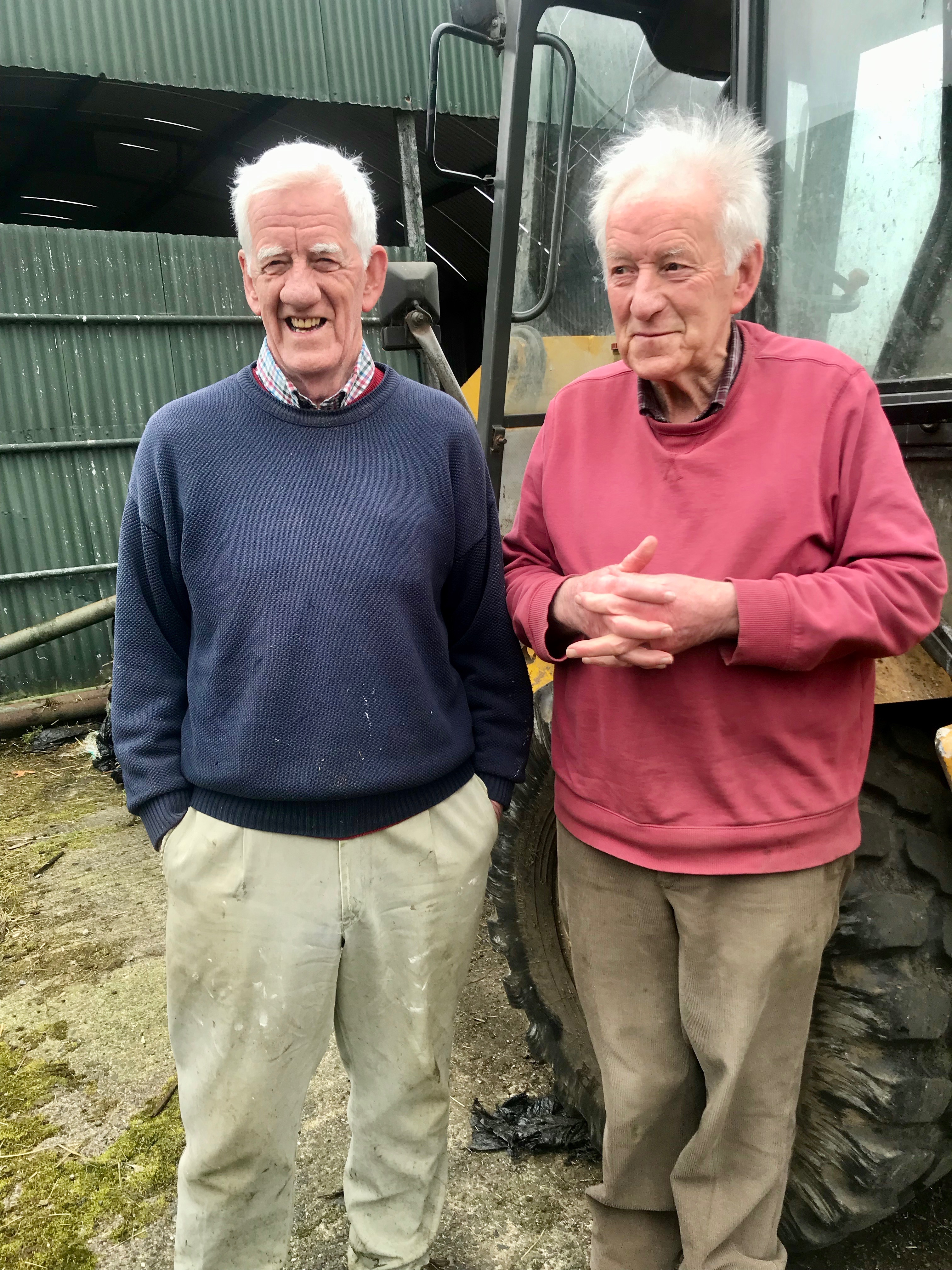 Bellaghy, the little rural community of 1,063 souls 15 miles from Ballymena, has resisted becoming a shrine to the Nobel Laureate. There is a brown sign that points you to his grave, and, of course, there is HomePlace, the museum-cum-study centre that opened in 2016 where there was once a police fortress, but there is none of the idolatry that he would have abhorred. In his work you read his love of home, family and community, and his natural humility is a given here.

HomePlace chose to mark his 80thbirthday, on April 13, with the UK premiere of the choral piece by Mohammed Fairouz, a young American composer who has made a speciality of taking poetry as his inspiration. Heaney taught for many years in the United States.

He was the latest poet Fairouz had lighted on, after Yeats and Auden, when he realised that he and Heaney had both had residencies at Grinnell College in Iowa at different times. He wanted to take on Heaney’s ominous poem In Iowa, a tempestuous thing: “I suggested we do something, then he suggested there’s something else there and then came back with this big masterplan with three poems”, he told me. “I said this is a little bit crazy, but I couldn’t resist it”, so In Iowawas joined by Höfn, about the earth’s creeping melt – “And every warm, mouthwatering word of mouth” – and finally the apocalyptic horror, partly about 9/11: “Telluric ash and fire spoils boil away”. Anything Can Happen, then, gives Fairouz his title. 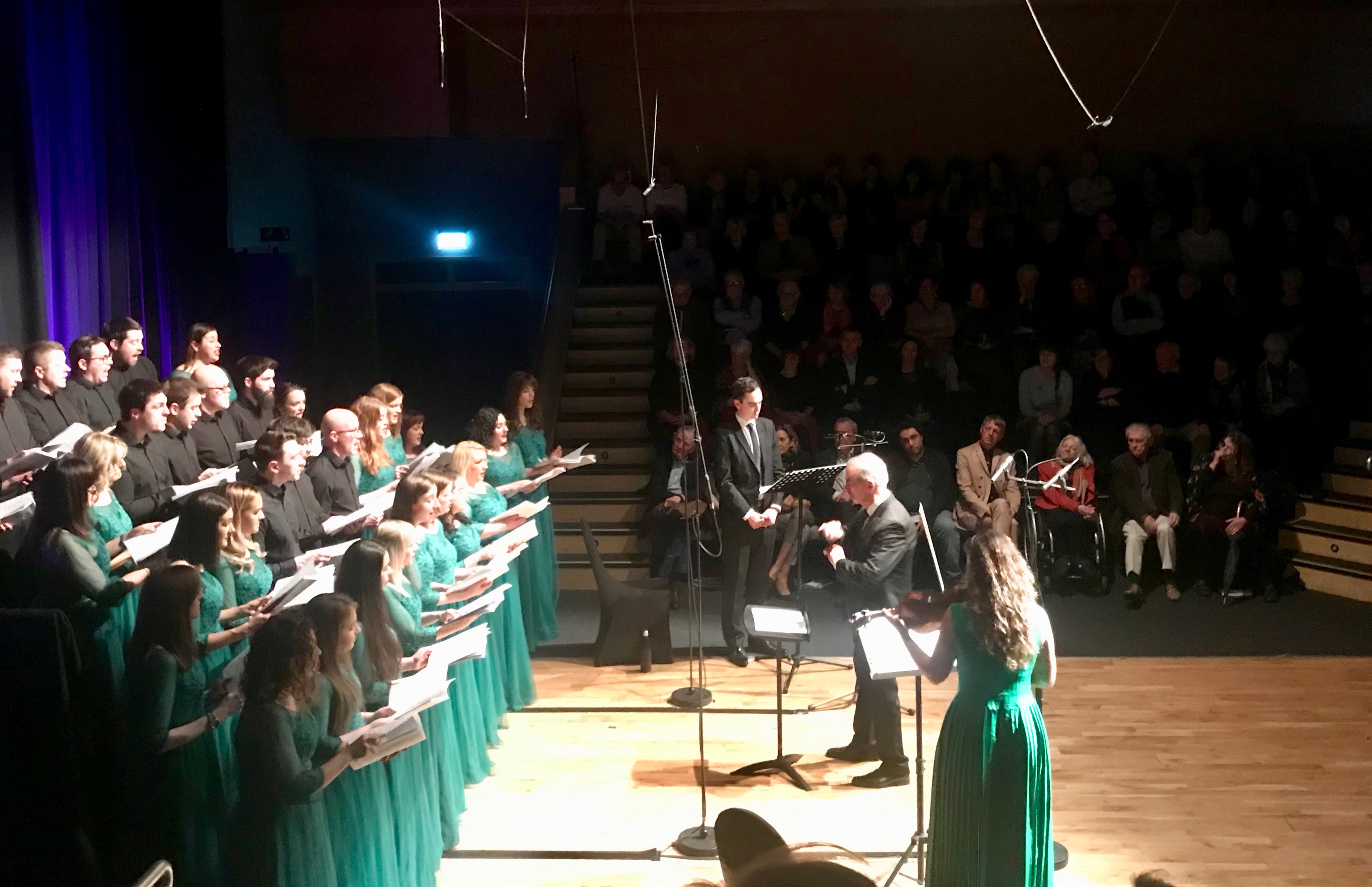 “So, two premonitions and then the omen fulfilled – very intense, and I thought to myself, this is such a big piece, crazy, but I said of course we have to do it”. It took him seven months to complete the 25-minute chorale, and though it was finished in the year before Heaney died he never had a chance to hear it. Next Fairouz wants to embark on an even more crazily ambitious exploration of Spirit Level, the collection published in 1996 a year after Heaney won the Nobel Prize.

The folk of Bellaghy filled the 190 seats of HomePlace’s studio theatre and got a flavour of the international Heaney, as performed by the Codetta Choir from Derry, where Heaney went to school, the Ulster baritone Brian McAlea and viola player Milena Simovic. But they also got to hear from their favourite son, read by his friends the actors Brid Brennan and Adrian Dunbar, accompanied by the cello of another pal, Neil Martin, with poems that relate to their own soil.

The whole thing was programmed by HomePlace. “We always want to keep Seamus's work at the core” said its manager Brian McCormick. “By incorporating the readings and Mohammed's piece we were able to offer the audience a variety of art forms on the evening to ensure his poetry was carried throughout the evening”. McCormick, who also happens to be Heaney’s nephew and so has known him all his life, chose the poems.

Mid-Ulster County Council has a meagre annual budget of £40m, but Heaney’s death in 2013 drew an immediate response, and straightaway it sanctioned the funds to create HomePlace, Built for a modest £4.25m the footfall target was 35,000 and it achieved that in its first year, a year in which the multiplier effect was worth an estimated £850,000 with catering upgrades and residential new-builds. But McCormick is not anxious to increase visitor numbers: “It’s not about that, it’s about a literary giant and what he offers who happened to come from Bellaghy” he says. It’s a duty to do right by him.

HomePlace is a biographical museum which is also a resource with a library and this theatre. The theatre is called Helicon, because in his poem (dedicated to his friend the Belfast poet Michael Longley) he describes Bellaghy as his own source of poetic inspiration –

To see myself, to set the darkness echoing”.

Although he is claimed by the world Bellaghy remained his place; he was involved. “I never met him”, said the gallery guide, “but I knew him”. Much is made of the way Heaney transcended The Troubles, despite close family being victims, with one of them having been shot at point blank here in the main street as he waited for a lift to work. But for Heaney politics, like social divisions, were irrelevant in real life.

Bellaghy Bawn is the oldest and largest building in the village, a 17thcentury fortified farm with a large house that dominates the community, but which had fallen in to neglect. Rosalind Mulholland, who with her husband Richard operates a manor further up Lough Beg, Ballyscullion Park, as a wedding venue, served on the voluntary committee to restore the Bawn (it is now a museum). A talented amateur watercolourist, she made a series of paintings of the Bawn to raise money and at his own suggestion Heaney, another member of the honour committee, wrote verse to go with her pictures.

The Heaney farm in Bellaghy, the Wood Farm, where Patrick Heaney operated as a cattle dealer, is still in the family and run by Seamus’s brother Hugh. “Oh, he was a fine poet” he says with a chuckle. “But he was very fine farm labourer”. The farm is diversifying with Hugh’s son-in-law Mal McCay operating a brewery there since 2016, making a beer called “Heaney,”. They thought of capitalising on Seamus’s fame, says McCay, with “Poet’s Ale” or “Seamus’s Brew” but then thought that it would be bad form: it is, after all, a Healey family enterprise, not part of the heritage industry. But the one subtle concession to Seamus’s celebrity is in that strange comma after the name, “Because Seamus was very good on commas” – people here know how punctilious Heaney was about punctuation in verse.

This rural spot invests the poetry, with spores like his birthplace, Mossbawn; his grandfather’s forge; his McCann grandmother’s kitchen at Castle Dawson; and tragedies like the death of his three-year-old brother Christopher,

And candles soothed the bedside”.

The Heaneys have a plot in St Mary’s churchyard in Bellaghy, and Seamus is there. His epitaph comes from his The Gravel Walks: “So walk on air against your better judgement”.

“It’s about going for it,” says his friend Eugene Kielt, who now runs tours of Heaney Country. “It’s about keeping your feet on the ground but looking up as well”.