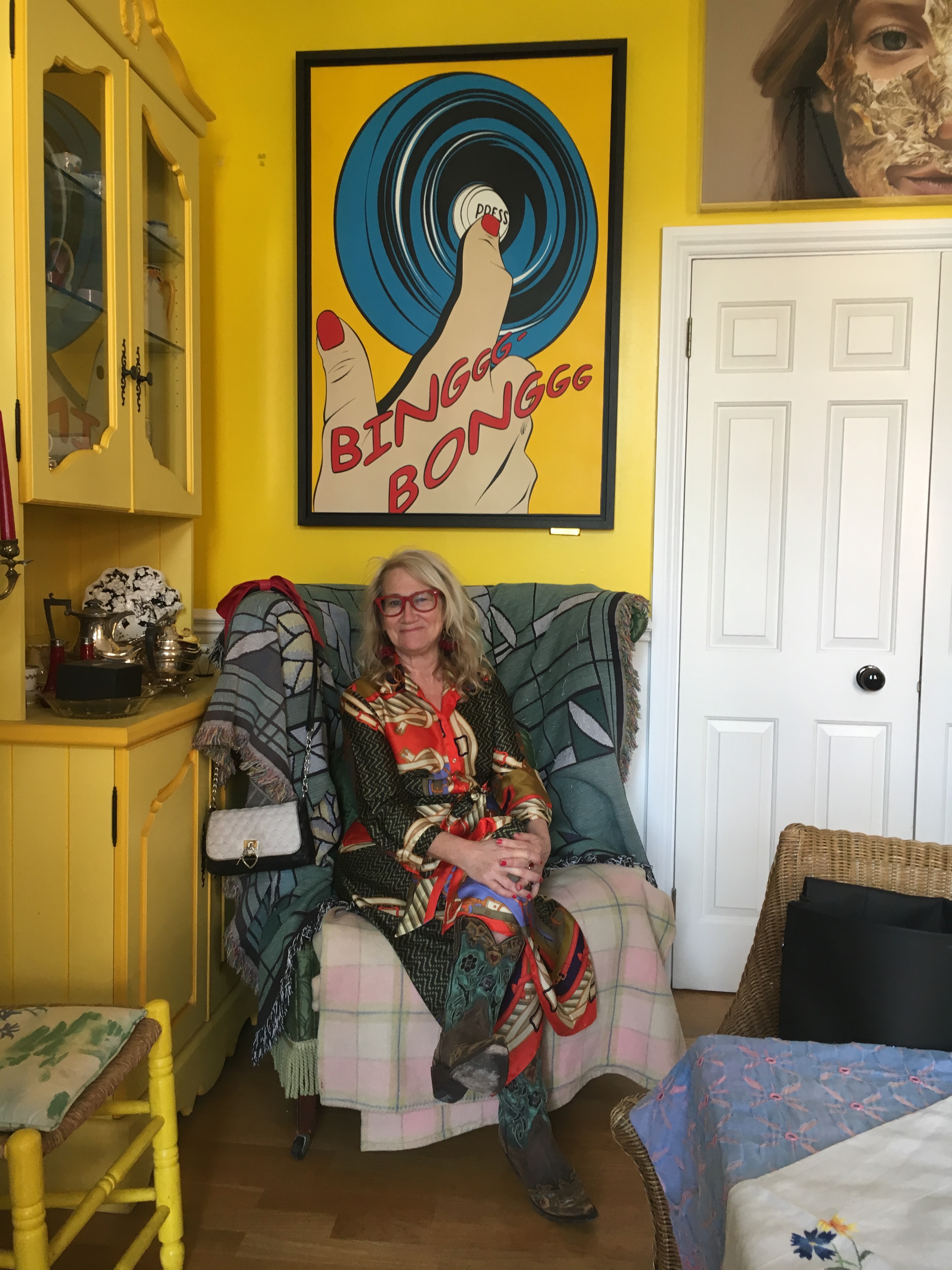 The Cynthia Corbett Gallery is in a former 1860s convent in a leafy corner of Wimbledon, not the kind of venue you would expect to be a nurturing place for artistic talent.

It is also the home where Cynthia and her husband Harry brought up their actor/writer daughter Carmela Corbett (Mad Men, An Inspector Calls).

It’s an art gallery to which few clients come, a home gallery where a private view is more like a soirée among friends where there might as well be music in the drawing room as new pictures on the dining room wall.

But Cynthia Corbett has become a driving force on getting young, emerging or talented but under-known artists before the public, almost as ubiquitous in Europe, Los Angeles and New York as she is here.

She claims no exclusivity on her artists because she thinks that would be unhelpfully restive on them, but her stable is impressive: Deborah Azzopardi prints of whose huge pop art canvas Ssssh! is rivalling  those of Tretchikoff’s Chinese Girl; the Catalan Lluis Barba, already famous in Spain but unknown here when Corbett took him on, whose huge narrative collages cast a sidelong glance at modern society, as his 18th century counterparts’ did, and often seem to include Cynthia and Carmela; Andy Burgess whose architectural cityscapes are in the private collections of the likes of Emma Thompson and Kazuo Ishiguro; Isabelle Van Zeijl, the Dutch-born artists photographer whose haunting self-portraits whisper of her 17th century Flemish inspirers, who is having the spotlight put on her in Corbett’s summer exhibition at The Royal Opera Arcade Gallery, Pall Mall  (June 24-30).

Some pictures here take pride of place and won’t move, like Self Portrait by Isabelle Dufresne, the one-time lover of Salvador Dali who as Ultra Violet was one of the “superstars” of Andy Warhol’s Factory. Corbett introduced her to British audiences through a series of exhibitions before her death from cancer in 2014.

And it was Corbett who organised the exhibition for the National Gallery’s resident artists’ series, Frank Auerbach, Peter Blake, Paula Rego and R B Kitaj, prints of which were sold in aid of the homeless charity Crisis.

“I love being in Wimbledon, but I knew that people weren’t going to come here to look at art” she says. “I needed to be in the West End, but there was no way I could have afforded to have a permanent gallery there. So I had to be inventive, and my answer was ‘pop-ups’ – short-term temporary shows designed to make an impact.”

Many of her artists come her way through word of mouth, her personal network and the constant circuit of the world’s art fairs, but also through her Young Masters Art Prize, ten years old this year and for which applications close on May 31.

But art was not her destiny. Born in Marlborough, Massachusetts, to a mother whose ancestors came to New England in the 1640s and the civil servant son of Italian immigrants, she is the second of nine children. Cynthia Valianti as she then was, starting work at ten, babysitting, cleaning houses, waitressing, while she studied and won a scholarship to the University of Massachusetts to study history, politics and languages. At post-graduate school she studied international law and diplomacy and became an economist with Citibank working in New York, Latin America, Asia and London, where she moved in the mid-80s. She met “very English” financial adviser Harry and married in 1987.

“In 1998 I said ‘I don’t think I can do this anymore’, my daughter needed me and the constant travel was becoming too much. We moved to Wimbledon” she says. And everywhere in the world she went she found herself taking time off to visit art galleries and museums. “I was just looking at art – I can’t even draw, but I just loved it”.

Faced with even more intense travel after being recruited to a Japanese bank, she quit and enrolled on Christie’s history of art course. “That was the point where everything changed” says Corbett. “I just loved the Old Masters, and I’m interested in how contemporary artists respond to classic art”.

She became a Tate guide “to learn how galleries work” and was guided through contemporary art by her friend the art historian Roger Bevan. “As an internationalist I knew I could run around graduate shows and exhibitions and identify people I wanted to work with, but where would the people I wanted to sell to go?”  She travelled Europe, taking space in “projects” - informal art fairs – and began to create a customer portfolio.

To finance her new career the Corbetts sold their large Wimbledon home and moved to what was to become their convent “home gallery” in 2000. Meanwhile, the optometrist and doctor Chris Blatchley offered her temporary wall space to show and sell in his Leadenhall Market practice, and the Cynthia Corbett Gallery was underway, with her home formally becoming the gallery in 2004.

Now, just back from taking part in the Art New York contemporary fair, Corbett is concentrating on the tenth anniversary Young Masters 2019. The catalyst for the initiative was that she missed curating her own exhibitions. The title is misleading – there is no upper age limit, but applicants must be 18 and not yet known to the UK market. There were 75 applicants for the first Young Masters in 2009, 250 for the next in 2012, 400 in 2014 and 850 for the last Young Masters in 2017 – “We run it whenever we have the money, and we could really do with a sponsor” Corbett says. “There is a modest prize, but the important thing is to get good work seen where it hasn’t been seen before.” So this year the Young Masters show will take place in October, while alongside the Van Zeijl show next month there will be the work of past Young Masters.

Alongside it now is the Young Masters Maylis Grand Ceramics Prize, answering another enthusiasm of Corbett’s, sponsored by her friends James and Maylis Grand, so that this year Cynthia Corbett Gallery has been involved in Collect, the Crafts Council’s annual show.

“It’s hard, and if someone came and said ‘here's a lot of money, open a gallery in Mayfair’ I’d grab it” Cynthia Corbett says. “But as it is, I love art, I love the people who make it and I love what I do. And I love Wimbledon.”