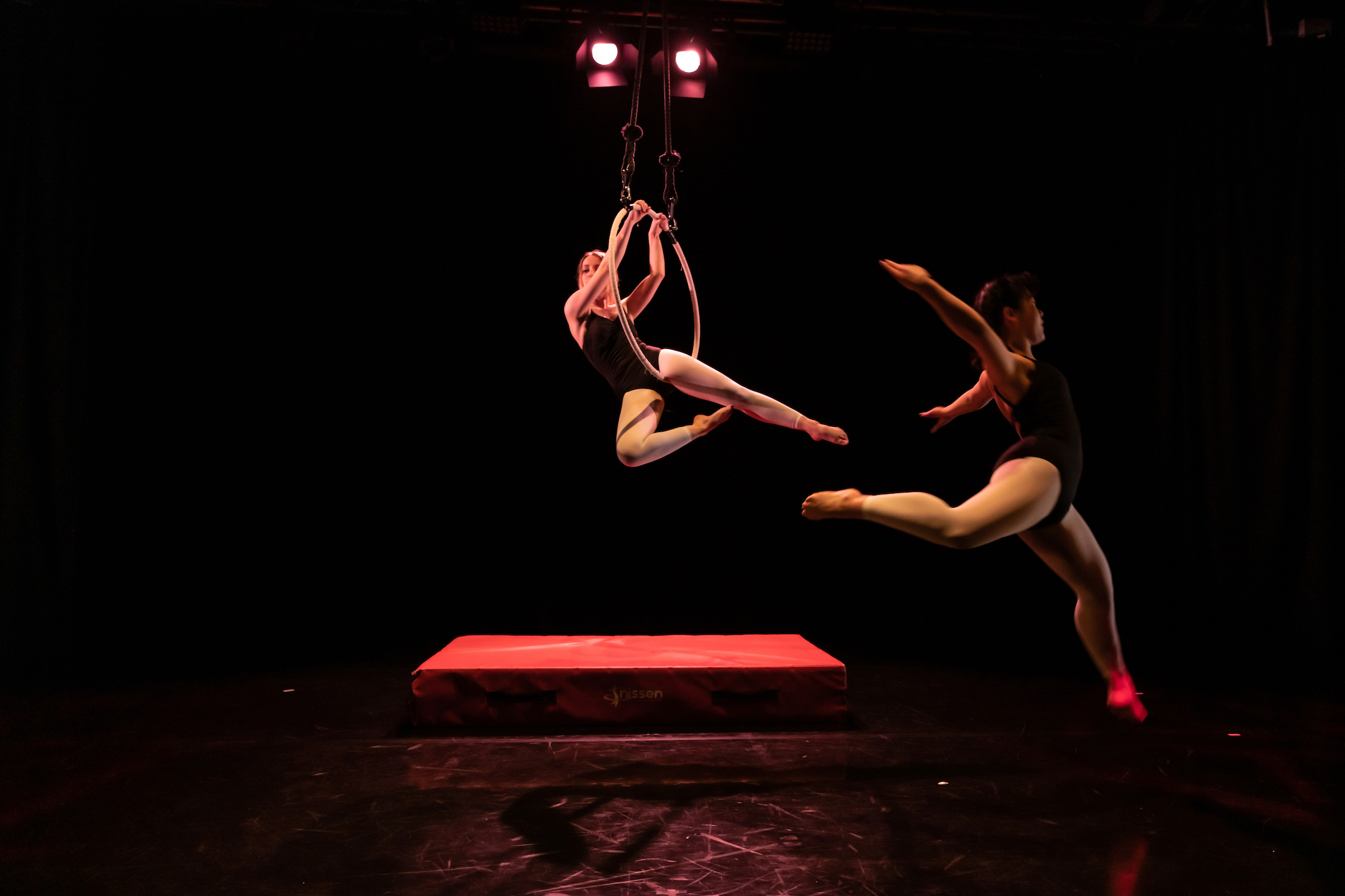 Déda began its forays into crossing over when the Esmeé Fairbairn Foundation awarded it a grant to do research in to the fusion of dance and contemporary circus.

This research, now published, started off a massive journey of organisation transformation which impacted on its learning and participation programmes as much as it did the artistic programmes.

In the space of four and half years the word circus has become part of everyday parlance in the dance development and learning team. This all coincided with the creation of the new aerial and dance studio which opened in 2014 and allowed Déda to create an aerial skills development programme in the building for seven-year-olds and up, as well as undertake projects with schools and community groups.

One of the first things Déda did was work with The Royal School for the Deaf in Derby to create a curtain raiser for their Christmas show, The Nutcracker, by Winter Walker. There were two lead artists working on the project, one with a dance specialism and one an aerialist. This enabled them to create a piece of work with young people that had both narrative and spectacle, not just held together by tricks.

The organisation then devised a new project to create a piece of youth dance and circus to showcase at the Crossing Over Symposium in the summer of 2017. This work was made with two lead artists again, an aerialist again and an acrobatics and dance specialist. The young people showcased their work in front of an audience of professionals from the circus and dance sector, and the Youth Dance and Circus Company was born.

The next challenge was how to bring contemporary circus and dance closer within Déda’s community outreach and education work, and we explored this through three more projects. 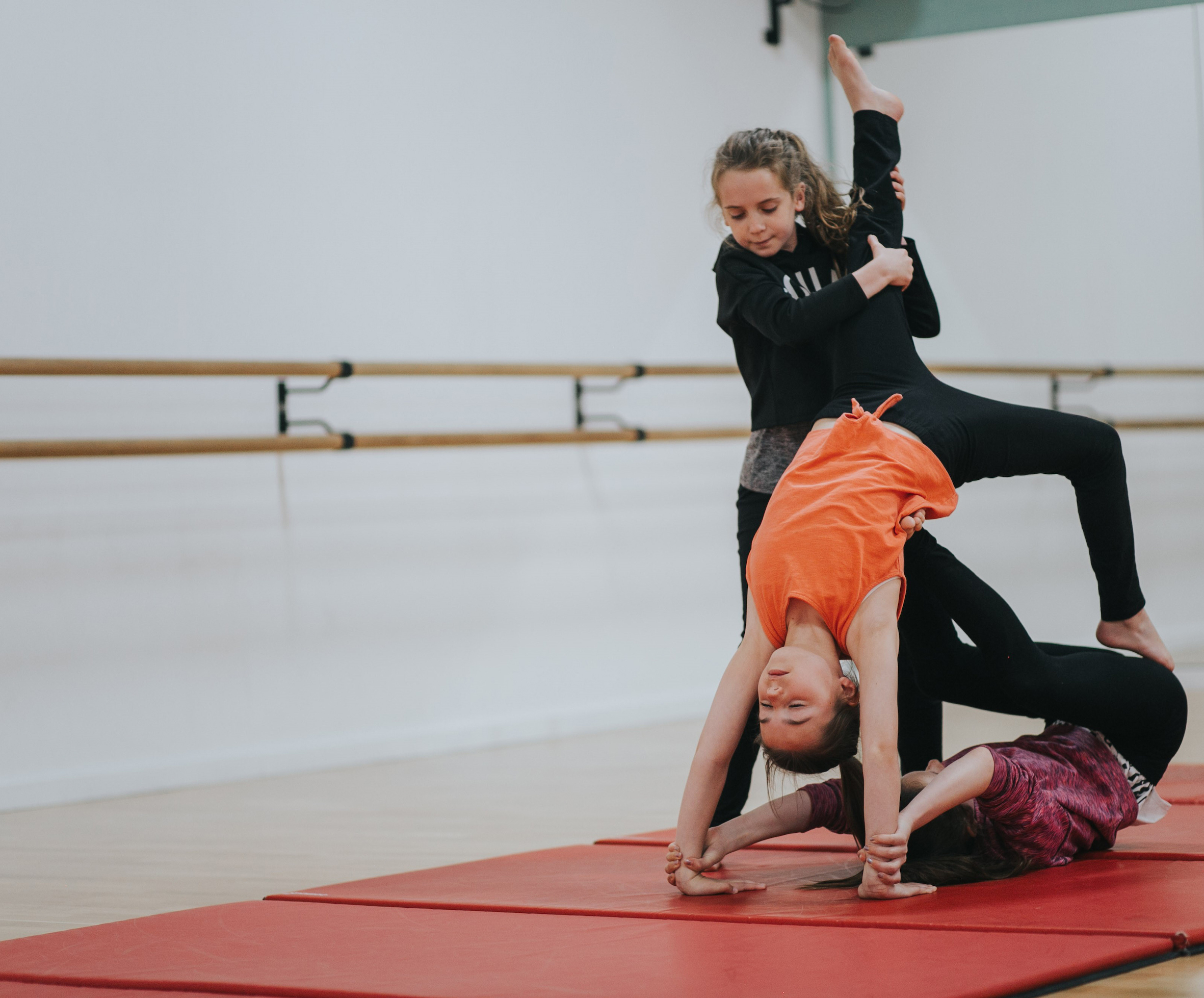 The first Déda co-designed and presented with Artcore, a visual arts organisation, as part of Derby Festé 2018. It brought two lead artists, a circus specialist and a dancer, to lead a series of workshops in schools and communities in diverse areas of Derby to join together in a circus and dance parade which animated the streets of city centre.

The second project was in partnership with circus artist Matt Pang of Pangottic, whose show Longshot involving juggling and contraptions made by Matt such as catapults, and which had been co-commissioned by Déda in 2017. At the time Matt was an associate artist, enabling Déda to draw upon his contemporary circus as well as engineering expertise. The STEAM Clubs project, as it became, took place in three Derby primary schools and was all about bringing science, technology, engineering and maths to life through art. Children worked alongside Déda artist Isobel Davis to explore some of the key concepts of an aircraft engine (basically suck, squeeze, bang and blow) through dance and contemporary circus activities, and this was complemented by hands-on experiments devised by ambassadors from Rolls Royce.

Within the third project, Déda explored the crossing over between dance and contemporary circus through their work on essential life skills, through the Derby Opportunity Area. This is Derby, as the project was titled, enabled them to bring a range of dance and contemporary circus artists from different disciplines to work together with children and young people from areas of disadvantage in Derby.

They began working in the Derwent and Chaddesden area in the autumn of 2018, running some taster activities in schools and community venues to find out what the appetite was for their unique form of crossing over. This was followed by a series of Friday Night Circus sessions at a local youth centre, where circus artists Angus McLeod (Chango Fuego), Kay Monrose (Circus Hub) and Rochene Johnstone (Project Hoop) taught the young people who came along how to hoop, plate spin, unicycle and other such wonderful circus skills.

As a development of that, Déda invited young people from the local community to come to the studios on Chapel Street to try their hand at aerial and acrobatics. Déda is now hoping to create a company of young people who are keen to take their newly found skills forward into the creation of a piece of performance, alongside some members of their existing Youth Dance and Circus Company. Watch this space!