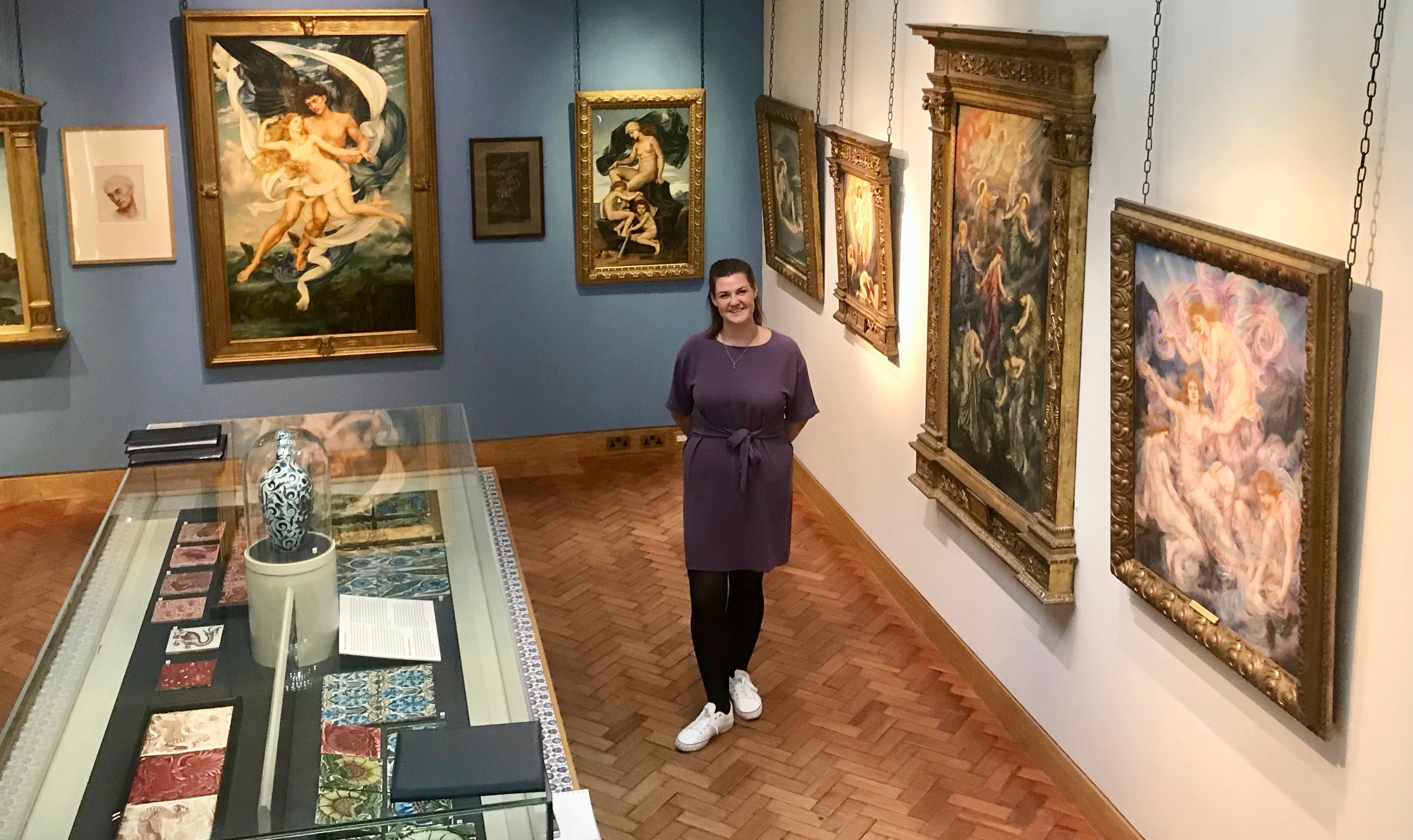 Fighting to save the ‘rarest spirits’ of the De Morgans

At a private view at the Royal Academy one evening towards the end of the 19thcentury, the RA’s president Sir Edward Poynter watched as his former pupil Evelyn Pickering and her husband, the ceramicist William De Morgan, passed by. “There go two of the rarest spirits of the age” he said.

After decades of uncertainty, the paintings and ceramics held in the De Morgan Foundation’s matchless collection are now being seen by more people than ever thanks to the work of art historian Sarah Hardy, who has made a vocation of making Evelyn and William De Morgan properly appreciated by modern audiences. But the fight to keep the unique collection together is hard-pressed as ever. https://www.demorgan.org.uk 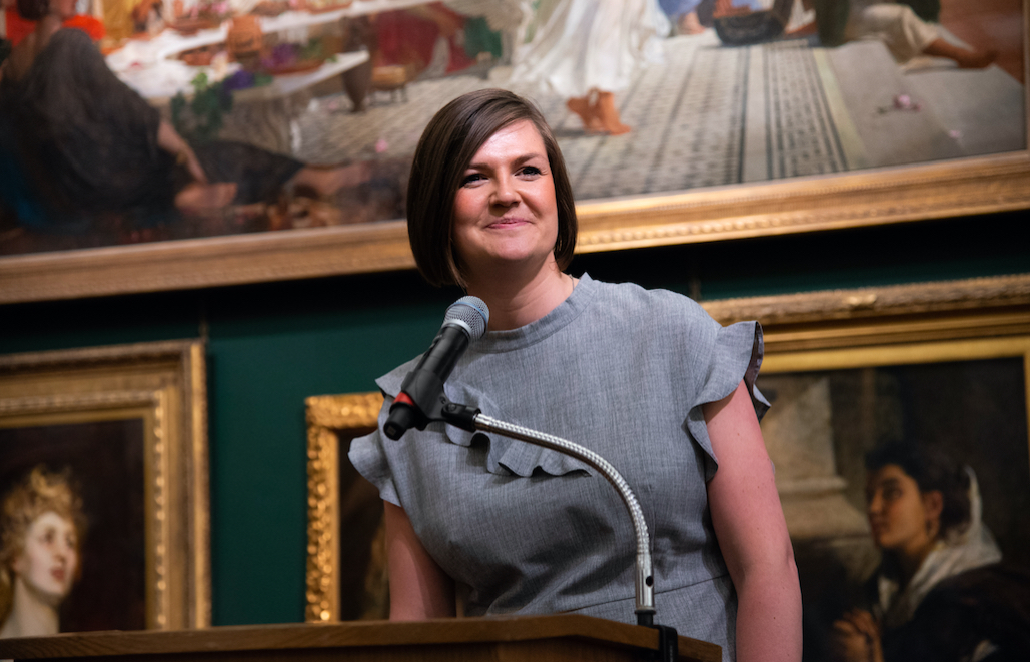 From a well-to-do Yorkshire family of landowners and politicians and the niece of the Pre-Raphaelite painter R S Stanhope, Mary Evelyn Pickering was born in 1855 and shattered the conventions of her age at 18 by enrolling at the new Slade School of Art, where Poynter became her tutor. She won prizes and a full scholarship – but used her androgynous second name to ensure her work was judged fairly and not marked down because of her gender.

On graduating she had an immediate success with an exhibition featuring her St Catherine of Alexandria “…by an artist named Evelyn Pickering” wrote one critic “who, it is surprising for more than one reason to find out, is a lady… will not fail to assert its merits as an exceedingly well-posed, richly-coloured, and above all expressive figure”.

In spite of society’s anti-feminine bias her career blossomed, and in 1883 she met the ceramicist William De Morgan, 16 years her senior, and their marriage became a creative partnership that lasted the rest of their lives.

De Morgan was the son of the first professor of mathematics at University College London, the logician Augustus De Morgan. Encouraged to draw from an early age and, although he inherited an abiding love of geometry and symmetry, he pursued art and his drawing won him a place at the Royal Academy Schools. Sarah Hardy has identified some of his drawings from that time in the collection, previously wrongly attributed to Evelyn.

De Morgan dropped out of the RA Schools after being introduced to William Morris in 1863, and on Morris’s urging forsook the easel for designing stained glass and furniture. His experiments with glass firing revealed an iridescent, opaque finish to fired surfaces, reminiscent of the lusterware of ancient Egypt. His inventiveness developed his own marque and distinctly recognisable style, and he set up his own firm in Chelsea, supplying tiles and other ceramics to vogueish Arts & Crafts homes. The business prospered, and in 1882 he moved it to Merton, closer to his friend Morris’s works. When he and Evelyn married in 1887 he had become the most celebrated and influential ceramicist of the time. 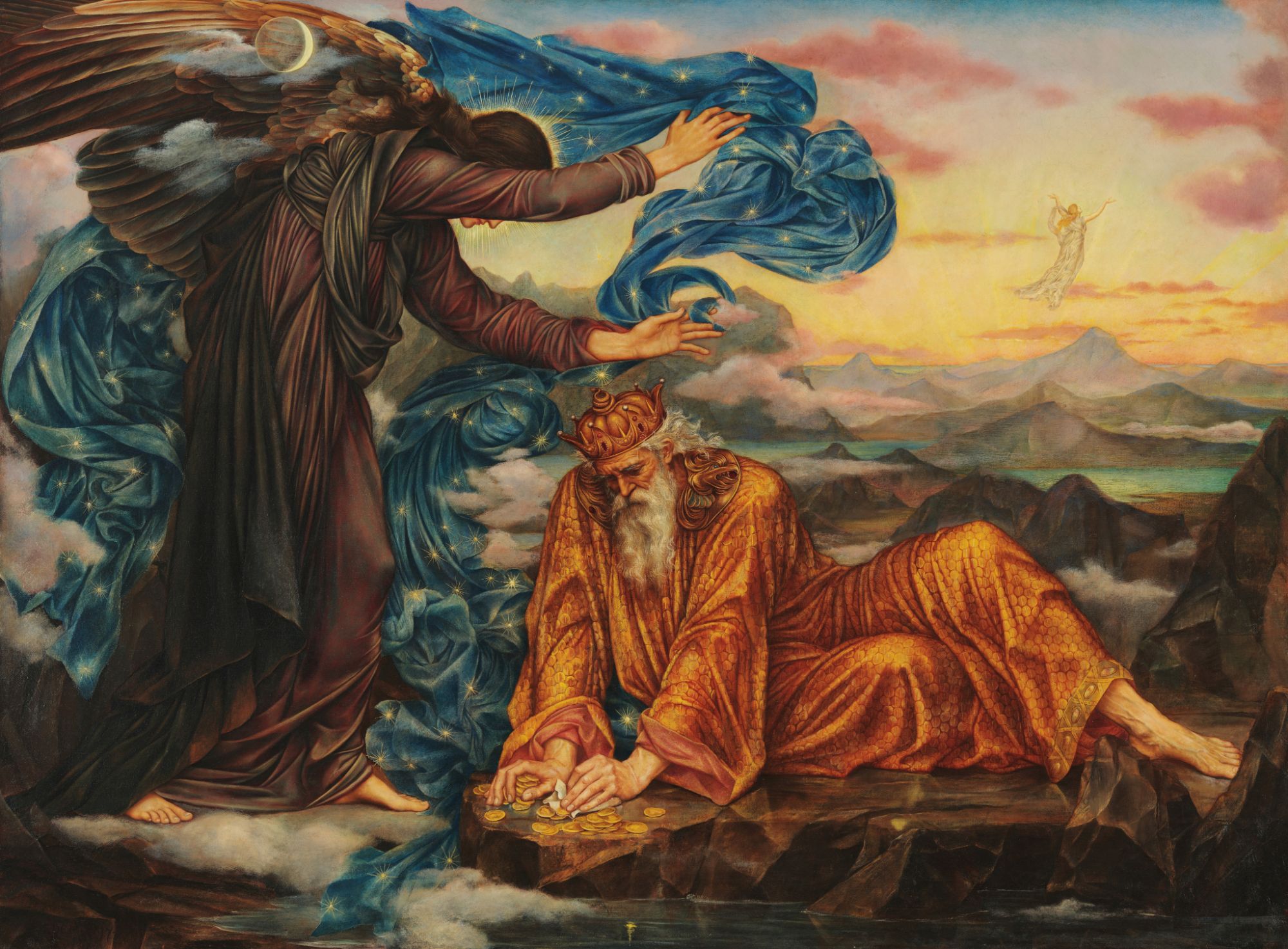 “Evelyn De Morgan was a feminist and spiritualist artist, who painted canvases that deal with tough issues, of poverty, women's rights, imprisonment, war and concern for the political state of the world - themes which are still so relevant today” says Sarah Hardy. “William De Morgan created beautiful, handmade objects in the face of an industrialising society. He restored value in original artworks and saw the benefit of a creative, empowered workforce. In the digital age of the 21st century, we can see that his approach to his staff and his workers was well ahead of his time.”

Sarah fell in love with the Arts & Crafts movement and the De Morgans’ work at Durham University, affirmed at Manchester on an art history MA. She gravitated to London, and to Wandsworth where the De Morgan collection was on display in the former municipal library.

For six months she was education co-ordinator at the Two Temple Place Gallery, before joining the National Gallery’s curatorial staff. While there she was seconded to create, manage and raising funding for a touring exhibition of De Morgan’s ceramics designs, Sublime Symmetry – currently at the Russell Cotes Museum in Bournemouth before moving on the The Laing, Newcastle. To date the exhibition has had over 100,000 visitors. 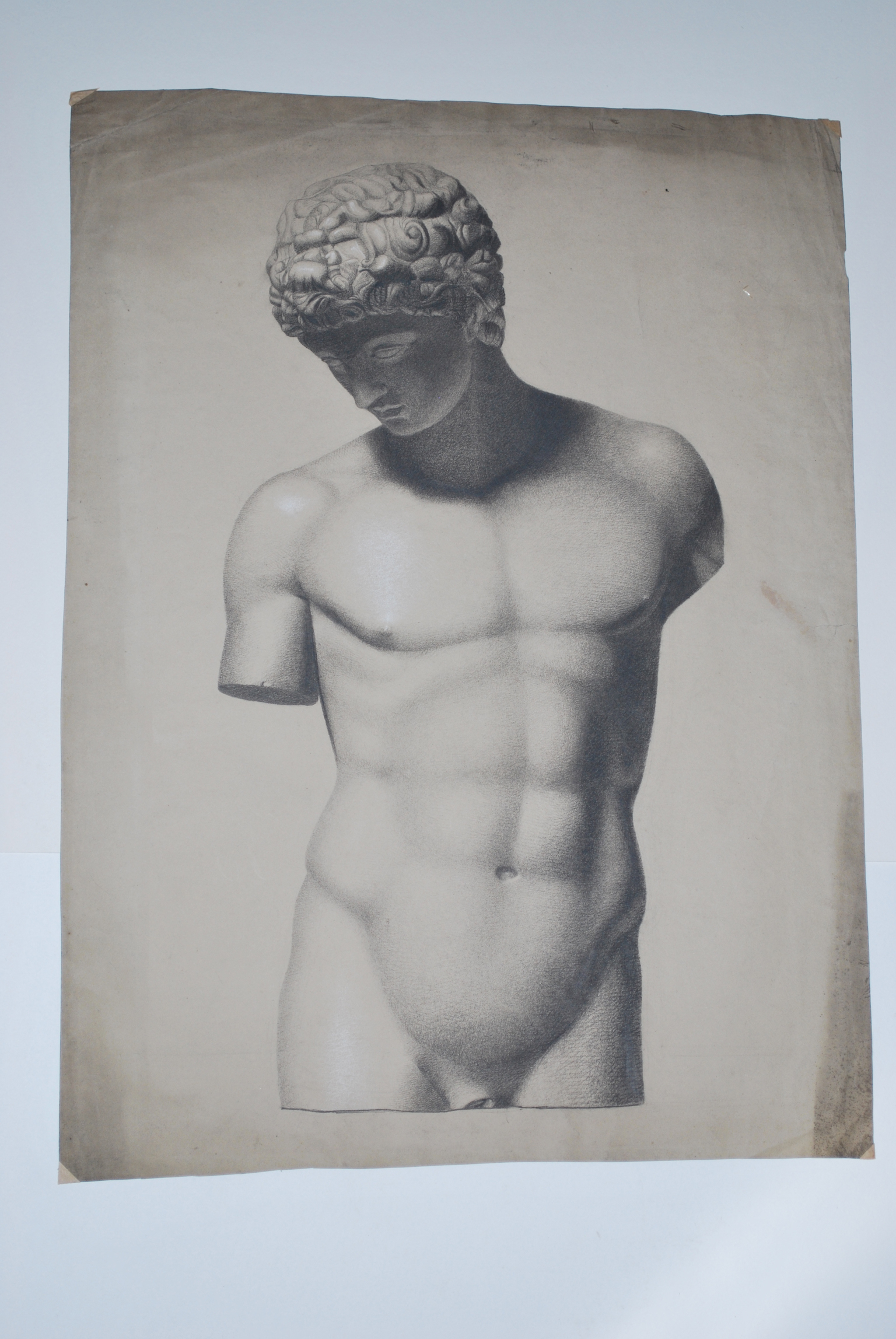 But the golden couple’s legacy, a collection of 56 oil paintings, more than 800 drawings and over 1,000 ceramic pieces, in the De Morgan Foundation’s holdings is still fighting for survival and for public notice.

William died in 1917 and his wife two years later, with a large body of both their work being inherited by Evelyn’s wealthy sister Wilhelmina Stirling, who made it her life’s work to build on it in her Battersea House home in Wandsworth, buying up everything she could. When she died in 1965, aged 99, she incorporated it into the charitable foundation – but failed to endow it with a permanent home.

But the golden couple’s legacy, a collection of 56 oil paintings, more than 800 drawings and over 1,000 ceramic pieces, in the De Morgan Foundation’s holdings is still fighting for survival and for public notice.

In 2002 the collection came out of store where it had been for 37 years when it was given a 21-year lease in its former library by Wandsworth Council, but a loophole in the lease nullified it and in 2015. The collection went back into store, after a promising arrangement with the London Borough of Newham had come to nothing.

At Wandsworth the collection had had up to 3,000 visitors a year, but that figure has increased by 100 times thanks to the partnerships Sarah has set up around the country. Last week she launched a new website giving access to half the collection so far, with the link to Google Arts and Culture.

She has  established permanent displays at Cannon Hall in Barnsley,  once the home of Evelyn De Morgan’s family with paintings, drawings and ceramics and works by  R S Stanhope; Wightwick Manor in Wolverhampton, now owned by the National Trust, was built in the 1880s as an Arts & Crafts house by Theodore Mander, influenced by the Aesthetic Movement, who filled it with Morris wallpaper and De Morgan tiles, and it has a large display of ceramics; the Watts Gallery, where Sarah Hardy is now based, was built by Mary Seton Watts to show the work of her husband G F Watts - the two couples were firm and collaborative friends – has become a centre for Arts and Crafts studies, with a permanent changing display space devoted to the De Morgans’ pictures and pots.

There are also long-term displays at The Ashmolean, Oxford, the Queen’s House, Greenwich; Standen House in East Grinstead; the Jackfield Tile Museum, Telford, and the Buckler’s Hard Museum, Beaulieu in Hampshire. Altogether, the De Morgan Foundation's treasures are seen by 300,000 a year.

But the collection is not safe, yet. It has no income except what it can earn from its touring exhibitions and from donations, and is currently operating at a regular annual deficit of £60,000, and because it does not have its own permanent building it cannot qualify for a National Lottery grant among other options, despite its national value status.

“This collection is like no other in the world” Sarah says. “It represents one women's great foresight and drive to create a gallery to commemorate the artwork of her late sister and brother-in-law, at a time when their artwork was very unfashionable. Indeed, she would travel through the streets of London looking in skips with her butler, pulling out tiles torn from fireplaces and remounting them to display in her home.

“If the foundation cannot raise its funds and generate income more successfully, the fear is that the collection will have to be dispersed and the lives and works of these artists will be enveloped into private collections and the reputation Mrs Stirling worked so tirelessly to solidify, will dissolve into art history. Unique in its completeness, the De Morgan Collection has the potential to inspire generations to come.”