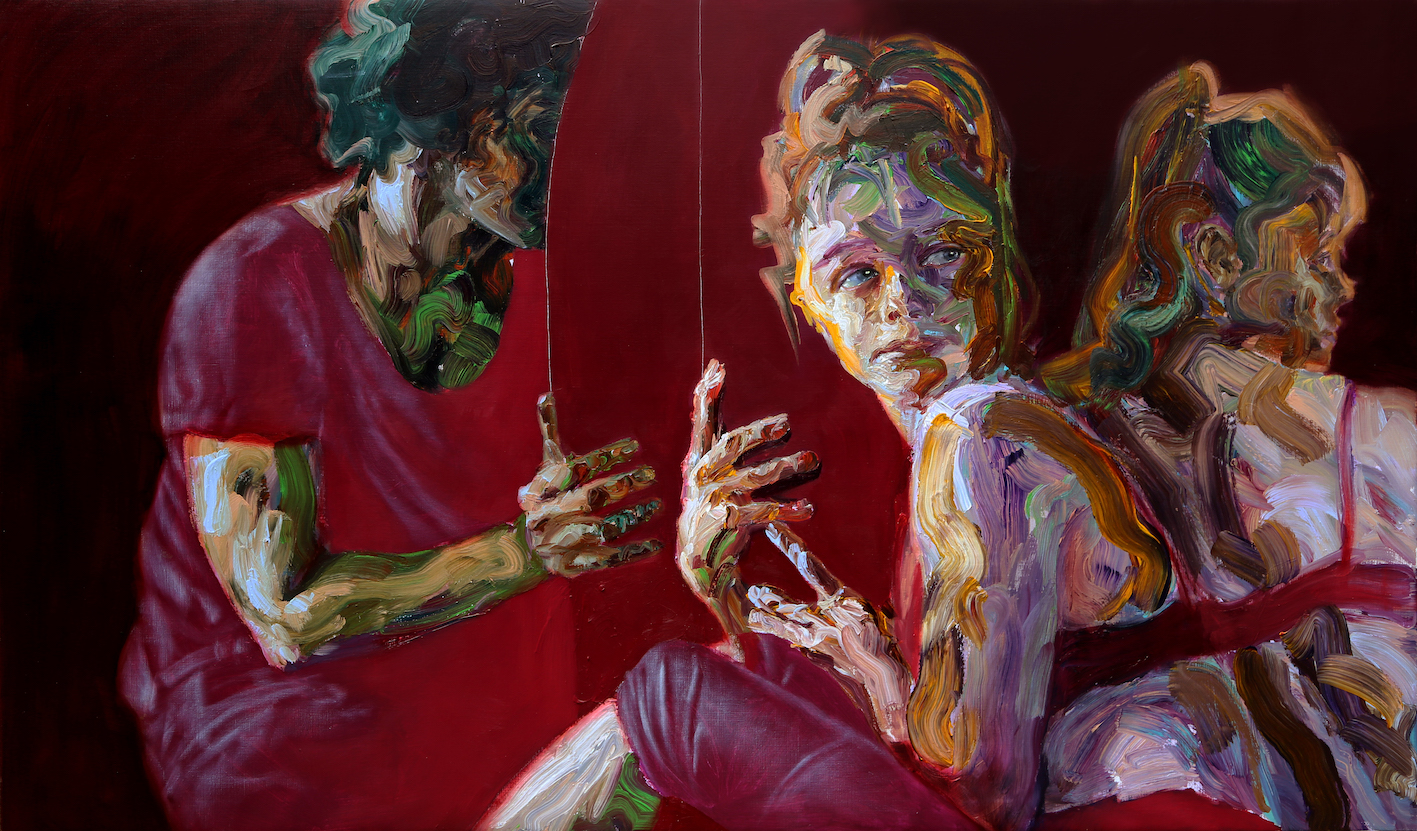 The Syrian painter Sara Shamma has chosen modern slavery as her residency subject at King's College, and through the pain and fear of her interviews she saw the importance of motherhood in their stories. She spoke to Simon Tait

In 2012, shortly before a car bomb exploded outside her suburban Damascus front door forcing her to gather her two small children and escape to Lebanon, the painter Sara Shamma saw a news report about an auction of girls and young women in Northern Syria, with a tariff according to age, the younger the individual the higher the price.

“It was very shocking”, she says. “I found contacts on the internet advertising women for sale, literally slavery. I wanted to do something about it, but other things were happening….”

She was partnered with Dr Sian Oram, senior lecturer on women’s mental health at the university’s Institute of Psychiatry, Psychology and Neuroscience, and together they collated first-hand evidence, building on Oram’s own research into the mental health of trafficked people. The human rights charity the Helen Bamber Foundation sourced survivors for Shamma to interview, and she was shocked again

“The first interview was emotionally disturbing, I couldn’t sleep. I was imagining pictures, noises, men, it was very bad” Shamma says. “It was a common story: her mother had died, she was nine or ten, some family members took her, raped her and sold her on to another country. 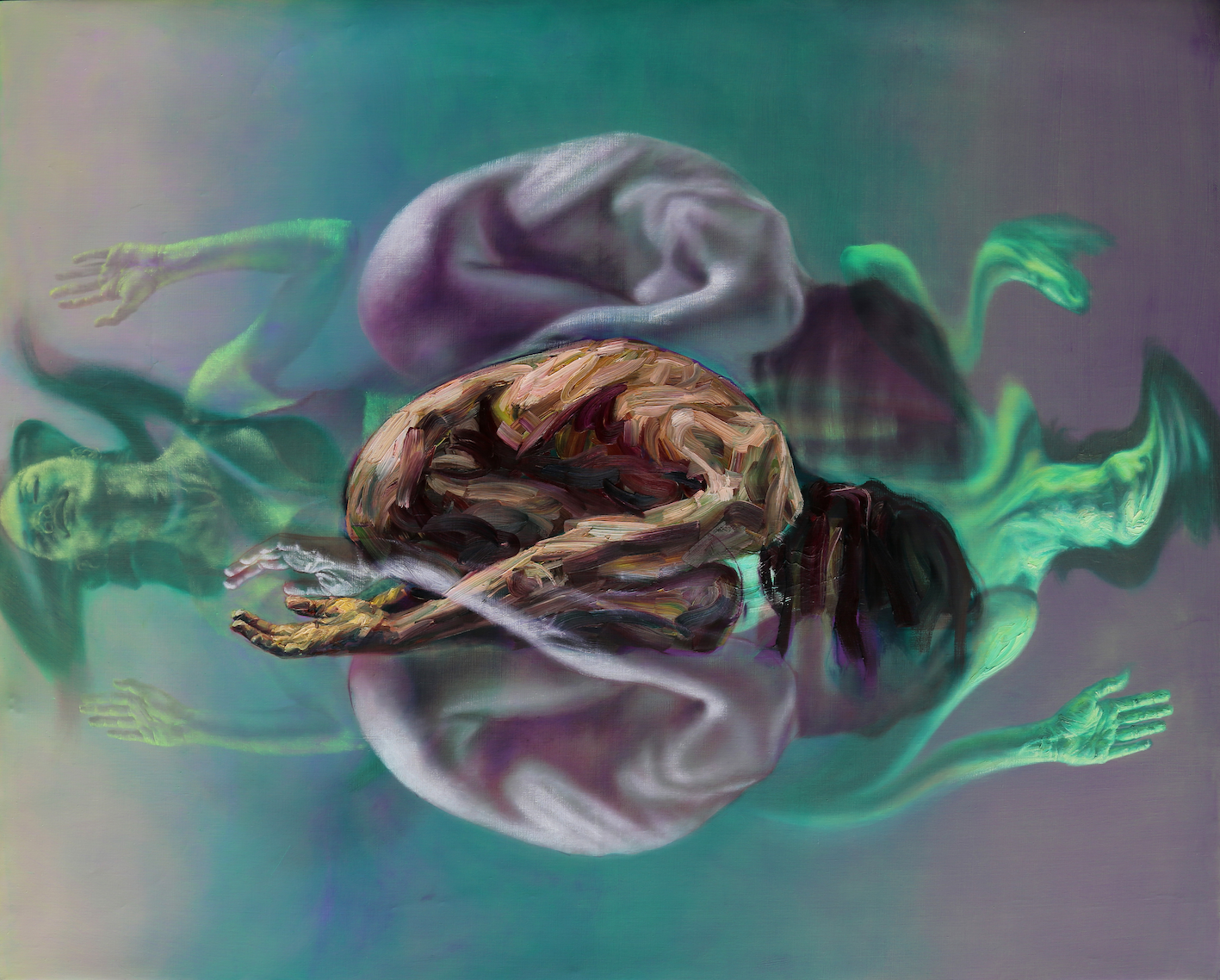 “She said to me that she did not have the word ‘rape’ in her language. She thought what happened was marriage.She only understands the word slavery from what the people who support her here have told her.”

And the women she spoke to were not Arab. They were African and European, sometimes sold into prostitution, sometimes into domestic servitude, all within the UK seeking asylum, having escaped from traffickers. Oram helped prepare the questions very precisely because these were severely traumatised women and the interviews could not be random.

Unlike the visceral pictures from her Damascus experiences of five years ago, the paintings resulting from the slavery residency are not graphic retellings of the stories she heard: they go deeper into the loneliness, the absence of future and specifically the key importance of mothers. Their mothers have soften died, been killed or even betrayed them.“Many of these women don’t know that they have a mother, but for a mother to sell her daughter is bigger, it’s different. Mother can be the main supporter or the main destroyer”. 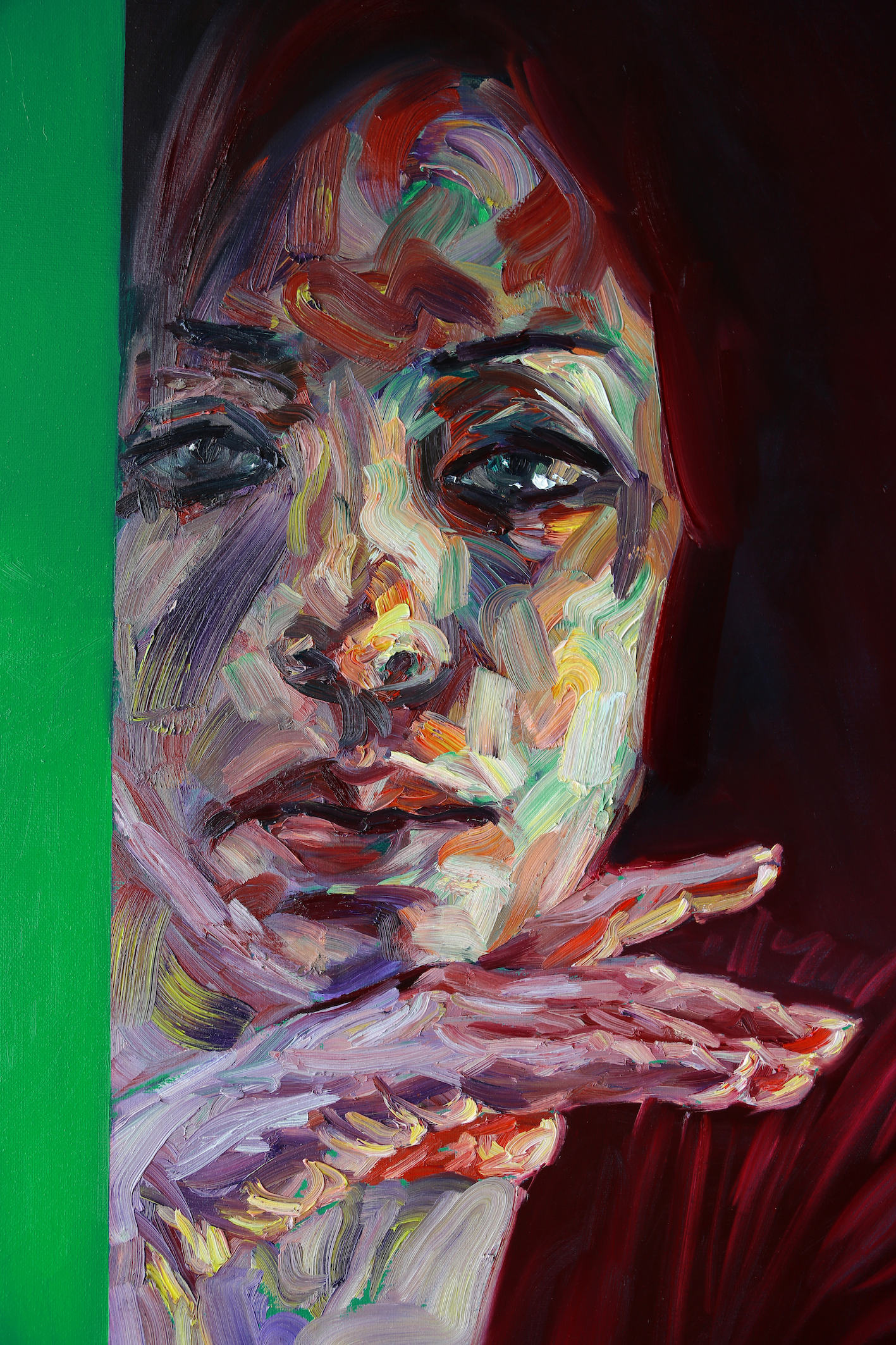 Sara Shamma, 43, had been a gifted but unremarkable portrait painter with an established international reputation. She’d painted the wife of the Syrian president, Asma al-Assad, and in 2004 she won fourth prize in the BP Portrait Award with a self-portrait of her smoking a cigarette – a judge told her that if she hadn’t shown herself smoking she might have won.

She was in her Damascus home with her two children (her husband, Mounzer, was in the city organising UN food supplies in the besieged city through his logistics company), and as she leaned forward to kiss her two year-old son, Amir, a bomb exploded, leaving them unharmed but shattering glass and their Syrian lives for ever. She fled with Amir and the baby Amal to Lebanon.

Her painting also changed, formed from what she calls her waking dreams. In 2016 Mounzer left Syria, and the four now have another suburban house, in South-East London where the north-facing front room is her studio. The children, now nine and seven, are settled in a local primary school, and Shamma hopes that her Exceptional Talent visa will graduate to a full British passport.

But she will remain a Syrian, and now that the civil war has left Damascus she returns three or four times year to the house and studio she abandoned there. Her subject now is still the waking nightmare of innocent lives torn apart indiscriminately, often by their closest relatives.

In Sara Shamma: Modern Slavery, curated by Kathleen Soriano, a large diptych, 2.5m by 4m and titled Four Ages of Women describes four women, three of them mirrored against the lives they had escaped from. The fourth has no shadow, because she had no future, but they are women of no particular race, religion or class.

Double Motherhoodis an older woman (for whom Shamma’s own mother was the model) enfolding her daughter and granddaughter. “For these women the problem is their families, because they’ve been abandoned by them. And the main thing is having lost a mother, either because she has died or they have been sold by her, and it’s very difficult to cure. So it's the mother, the daughter and her daughter. Being with those women makes me appreciate and think more about motherhood”.

For Hidden in Plain Sight (main image) she went to the nearby Mountview Academy of Theatre Arts to use actors as models. Two appear in it, both are seemingly hiding, one behind an undefined screen the other in her own reflection. “When I started to do any of this work” she explains “I hadn’t any preconceptions, and after I'd finished the painting I sat to see what I'd done, to think, to ask questions, and at the end to name it”.

In The Fall we see Shamma herself in that introspective mode, in a deep, dark red, corpuscular warmth, but her figure is divided by another inverted flurry of floundering hands and feet in a screeching green. “Before you sleep there’s this lovely feeling of falling and I love this idea; but these women are not sleeping, they are really falling, who knows where. It’s actual”.

In and Out has two finely painted naked women in foetal curls, forming a shell for a third foetal shape painted with violent frantic strokes,a visual scream, while behind another woman, prone and mirrored, is melting. “I adore contrast, between the strong and nervous brushstroke and smooth surface, I see that in everything in life, and in the colours….”. In the strong north light of her studio, when she closes her eyes she sees the deep blood red, and when she opens them again she sees the contrast, the unequivocating green. 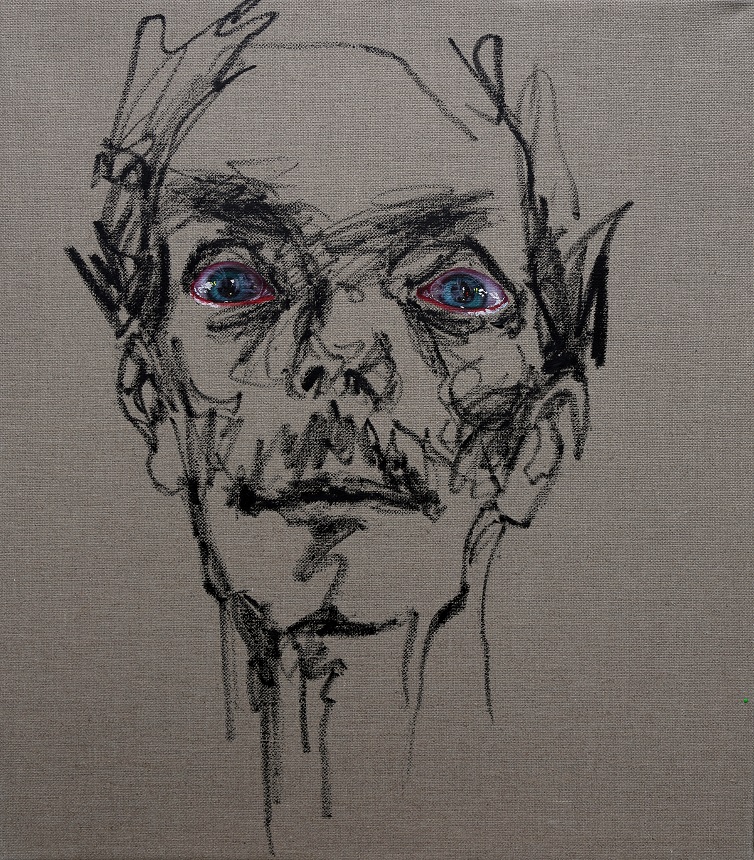 And then there are a dozen or so smaller canvases, oil stick sketches of male heads, each different, each imagined, each with a single characteristically properly formed eye. “Eyes are everything, a painting without eyes I cannot communicate with. I’m inspired by the eyes of the men who look at these women, hunting eyes.

“All these women are very much afraid of the people who look at them, because these people are judging them, and these people know each woman’s soul”.

A version of this interview first appeared The London Magazine