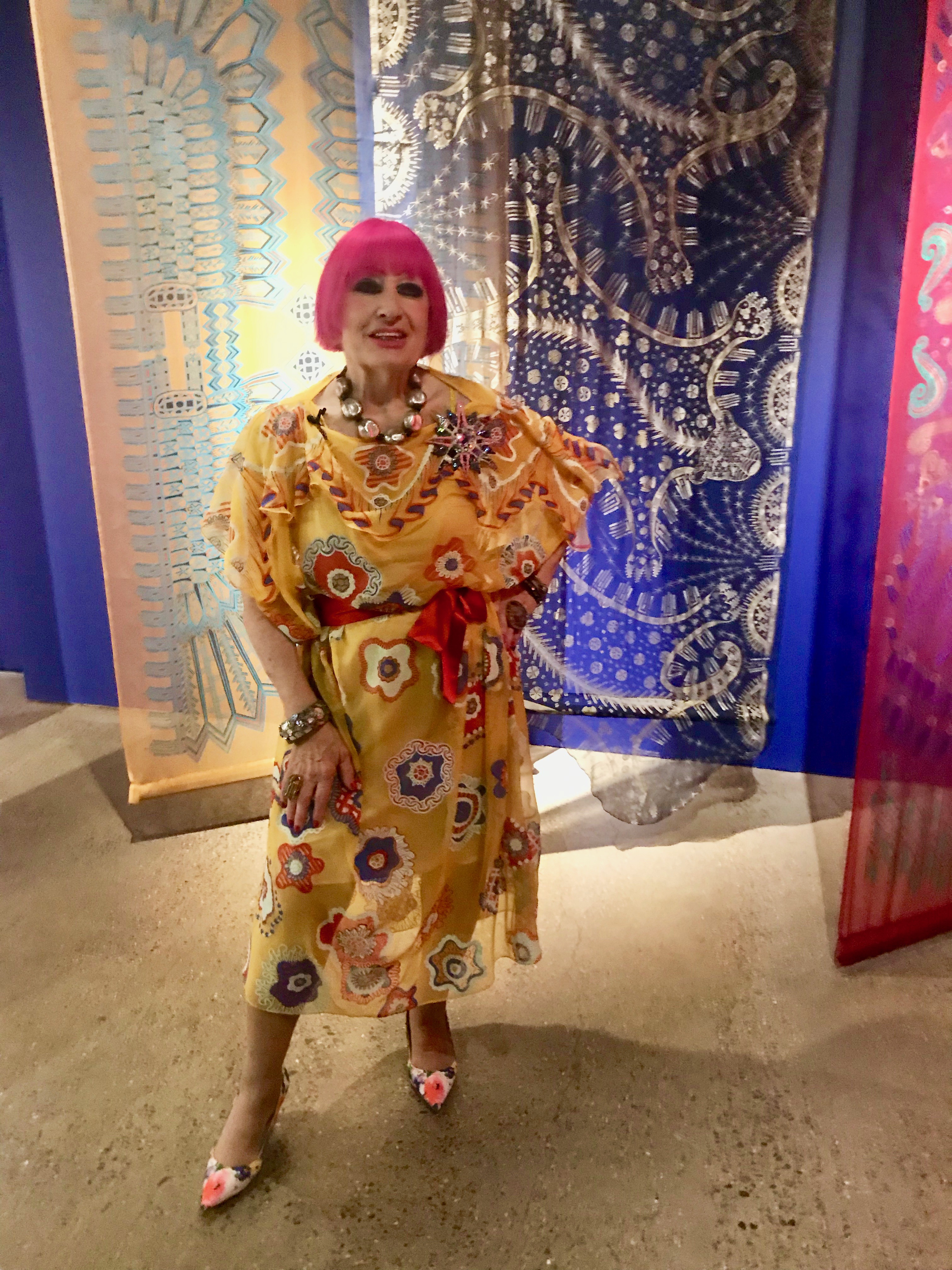 Zandra Rhodes is celebrating 50 years in the fashion business with an exhibition at her own museum. Simon Tait reports

Dame Zandra Rhodes will be 80 next year, and she has never stopped working. The retrospective exhibition at the museum she founded in Bermondsey is called, characteristically, 50 Years of Fabulous, mapping the progress, processes and influences in a career which has never faltered since she was at the Royal College of Art alongside Peter Blake, David Hockney and Derek Boshier, and was awakened to Pop Art.

She is a legend, and her remarkable endurability in an industry that is the closest art gets to showbiz is the story of this exhibition.

In a world of chiffon, silk and calico, Rhodes was a pioneer with her inimitable print – she was trained as a printmaker, not a fashion designer, but once she learned how to cut she could make the dress obey the design.

She took to spending hours in the V&A analysing stitching and working out how to reproduce it in print. 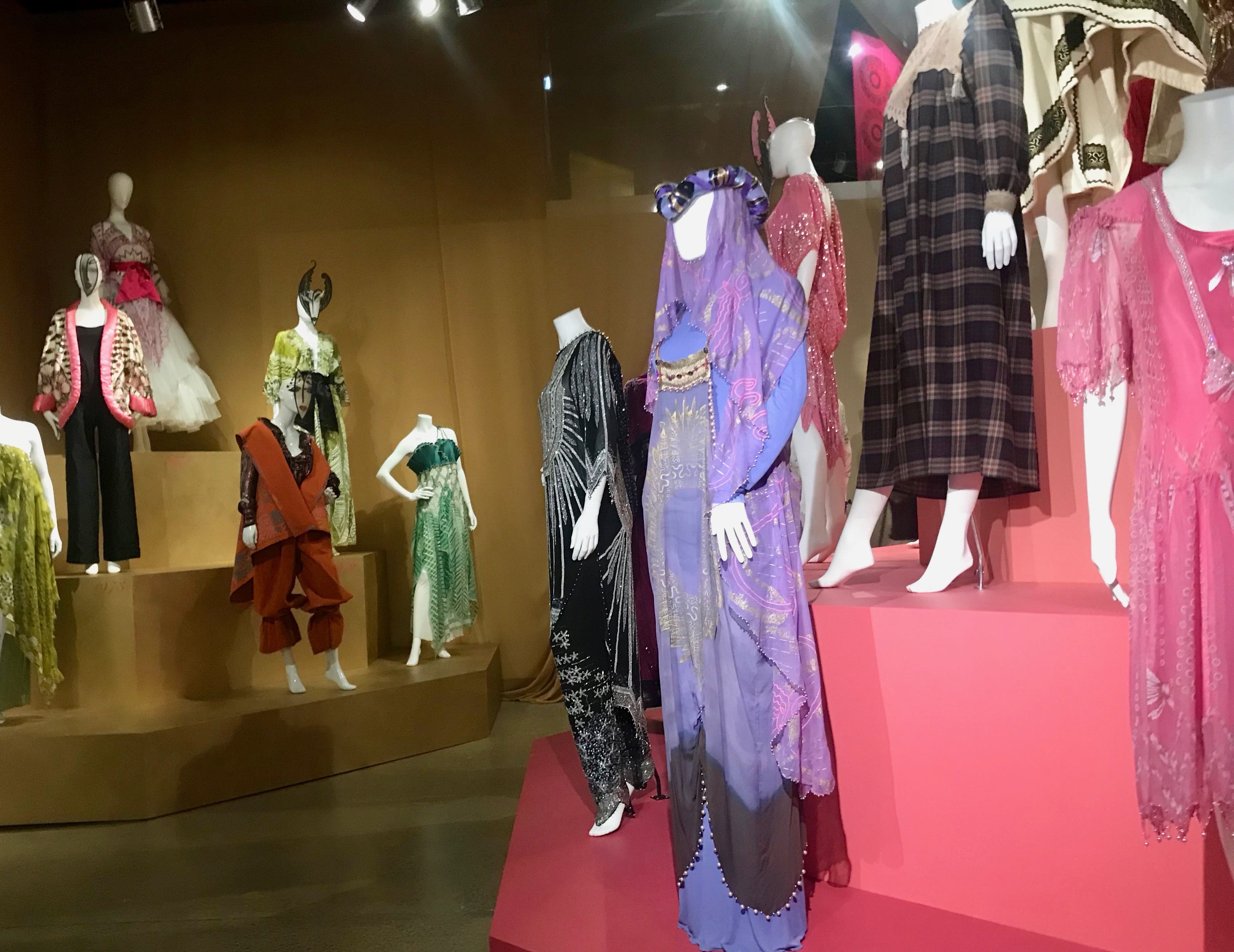 In the 70s, the age of the kaftan, she went to America and was intrigued by the native Americans’ use of feathers, reproduce them in cut-out prints and use the natural colours they did, terracotta, indigo, black and turquoise, another signature.

For someone so associated with the modern, following trends and artistic progressions, Rhodes has spent a lot of time in the past, not just in the V&A by in museums such as the Wallace Collection, where the Romantic painting as of Fragonard and Boucher were another inspiration.

She went to India and was captivated by Indian fabrics, patterns and styles, so much so that when Japan was planning an Indian festival she was invited to represent India.

In Japan she was homesick and a friend gave her lilies to cheer her up. They became her Lily Collection, and the flowing white gown in it, known only as “73/44”, is still her best-seller.

Her travels have been her foodstuff, with images from Egypt, Mexico and Australia feeding her imagination, which never seems to flag. The display ends with her newest creation, a silk chiffon knee-length kaftan with a subtle flowery print inspired by royal jewellery, and called “Jubilee”.

The exhibition has a space called the “Chiffon Forest”, which is more a copse of floating fabric bearing print designs that cover her entire career. Nearby is a gallery of her sketchbooks, showing the process of how she gets from first thought to the clothes hanger.

And if you’re Zandra Rhodes, where better to tell your own story through your work than in your own museum. She bought the former warehouse near London Bridge Station in a rather run-down part of Bermondsey in 2003 and transformed it into the Fashion and Textile Museum.

It has no permanent collection, but three times a year mounts a special exhibition – the Swinging Sixties, Cecil Beaton, Liberty, the T-shirt, have all been subjects. It is also her home, with above the galleries her workshop and above that her penthouse home.

But the economic complications of running a museum were almost to much, and there was a danger that after four years it was in danger of closing. In an inspired piece of entrepreneurship, Newham College of Further Education, which has its own progressive design department, took it over, with Rhodes still in situ and the centre of its activities. And meanwhile Bermondsey Street has itself become fashionable, with the White Cube art gallery at the other end and wine bars, restaurants and clothes shops in between.

It has taken on a new business sense. Its loss-making café was closed to become an events space, hireable; a fashion shop specialising in contemporary jewellery is a money maker; and the exhibitions are attracting 30,000 visitors each. 50 Years of Fabulous is expected tobeat that.

The exhibition is more than homage to a great designer, it is an object lesson in professionality, the quest for inspiration, quality and versatility – she designs clothes cfor royalty and pop stars with equal attention to detail and quality. Asked what was her favourite dress in the show, she responded after some thought: “It depends on what day it is. Sometimes it's the one that’s making a bit of money. And then sometimes it's the one that’s just a great work of art…”

Zandra Rodes: 50 Years of Fabulousis at the Fashion and Textiles Museum at 83 Bermondsey Street SE1 3XF from September 27 to January 26