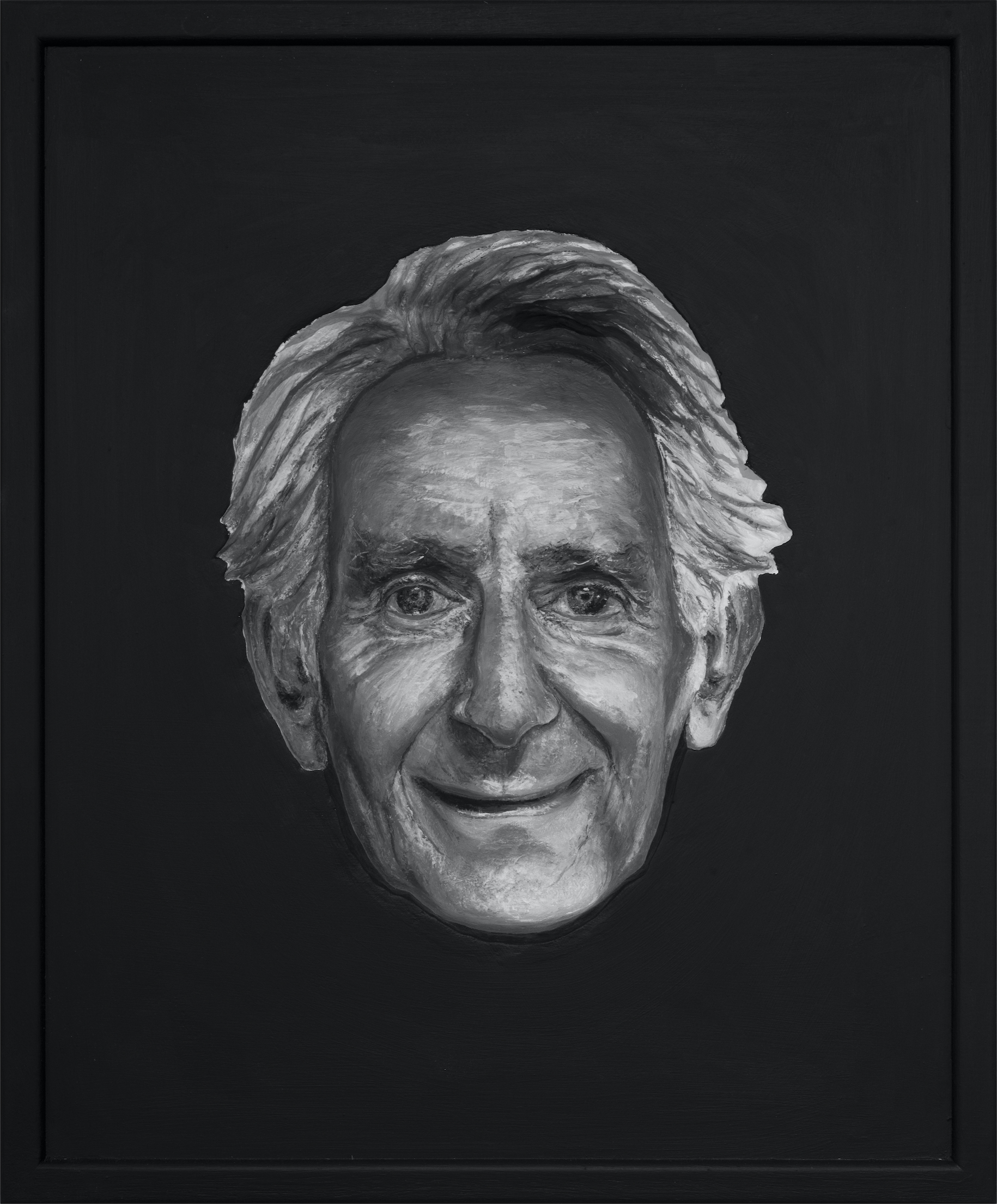 This is a self-portrait of the surrealist artist Patrick Hughes. It looks like a conventional convex life mask, but it isn’t: it’s concave, a paradigm of Hughes’s “reverspective” world.

His paintings defy visual sense, because they are a reverse perspective with the vanishing point brought to the front of the painting, giving three dimensions to what should be a one-dimensional image. In a 60-year career he has taken the absurdist side of surrealism to a different place, and to celebrate his 80th birthday Bel Air Fine Art in Bond Street have brought pictures from early in his long career to the very recent to wittily tell his story in an exhibition opening tomorrow (November 14).

As a student he was first influenced by Bauhaus, and in particular by Paul Klee; the surreal germ he caught from René Magritte in an exhibition at the little Portal Gallery in London in 1961; the humour came from the Dada creations of Marcel Duchamp. But the reverse perspective came from a railway track at Leeds Station in 1959 (he was attending the old James Graham Day College there). 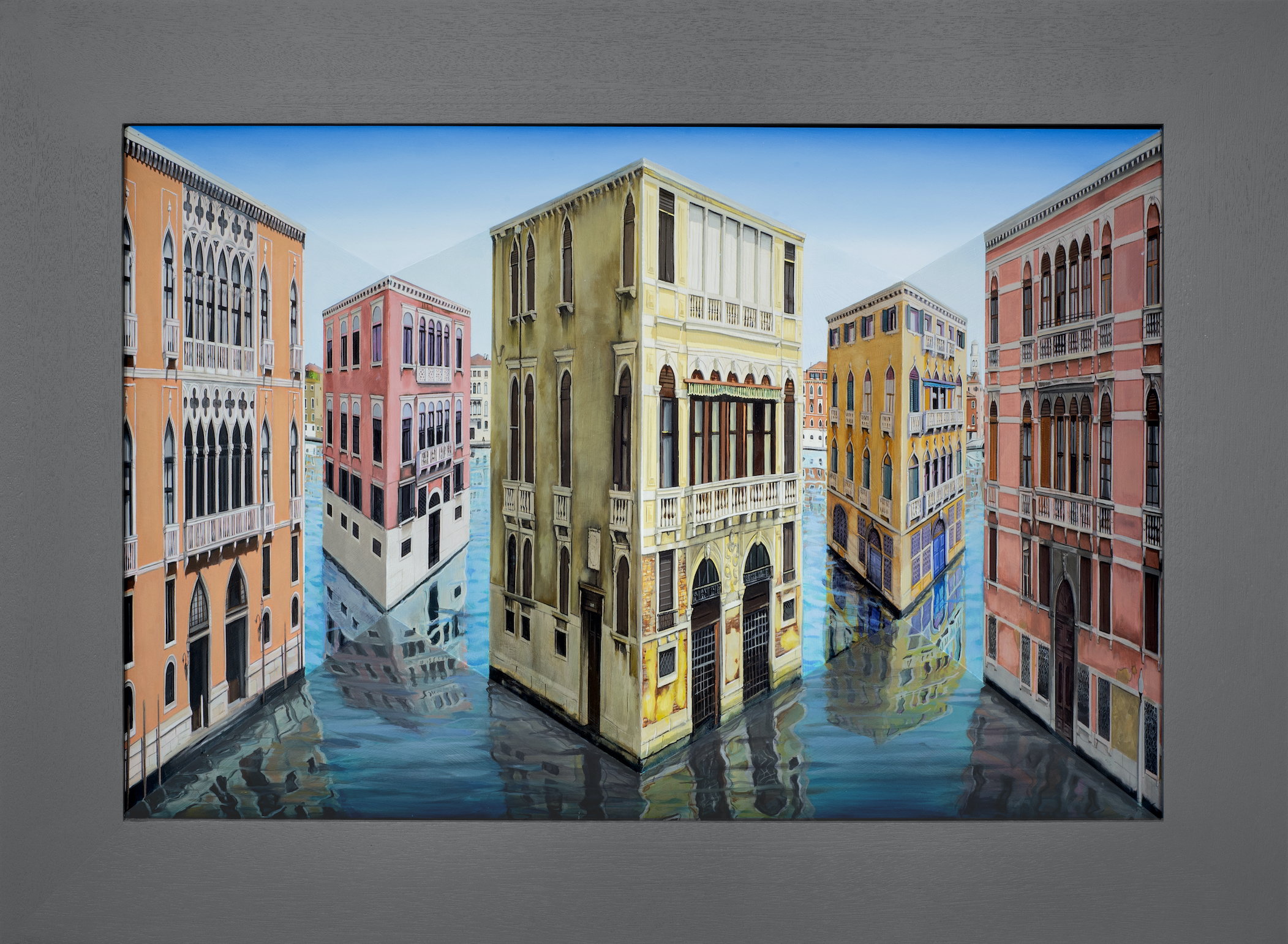 That downline platform moment was his epiphany. “I noticed the railway lines ahead of me come to a point, the point of infinity” he says now. “I thought to myself I could make a silver and black set of railway lines that come to a point more quickly”. A year later he was reversing this forced perspective with a sitting room the developed towards the viewer instead of away, reverse perspective. “By the process of irony – no grown-up believes railway lines actually come to a point – one can make the point that our experiences are relative, fluid, subject to change”.

His work was popular in waves, lumped at first with the Pop artists, but always unique and forward-looking. The Pop artist in him comes out in this exhibition through his rainbow paintings, a small room  in which rainbows are straightened, hung out to dry on the moon, losing their colour as they enter a prison cell, plethorised as a downpour, slicing into Mondrian squares and infecting them with secondary green and orange (“I hate Mondrian, all primary colours and black and white, too pious to take seriously”). He gets more derision out of Mondrian with a new painting in which the abstract boxes are made into reverse perspective buildings.

He had a four year stay in Manhatten’s famous Chelsea Hotel – where Arthur C Clark wrote 2001: A Space Odyssey, where Dylan Thomas died and Sid Vicious’s girlfriend Nancy Spungen was stabbed to death – in a deal which involved a mixture of renting his art to show in the foyer and illegal sub-letting, for a rent which came down to $50 a month.

In New York he met Lucas Samaras, an incorrigibly impoverished artist, who had a surreal approach to making art: unable to afford a studio he made his sculptures in whatever gallery he could get it seen in, made to measure, getting his priorities in financial order. “Which goes to show” the story allows Hughes to say “that you don’t have to put the art before the horse”. 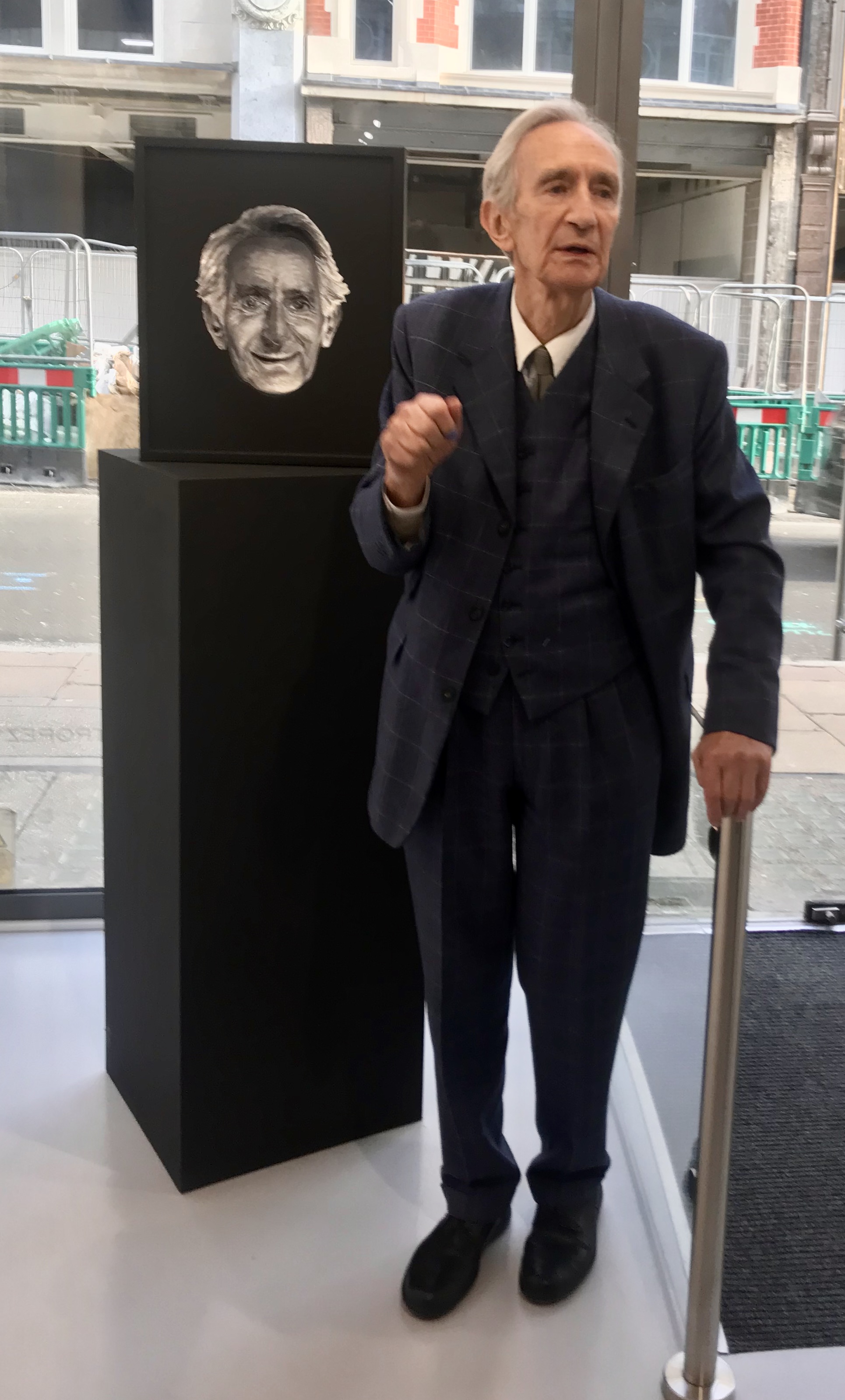 One of his newer pictures here is a homage to street artists, with walls projecting out with the work of the likes of Keith Haring, Banksie, Phlegm and Basquiat arranged as an open-air gallery in a fit of nostalgia for his Leeds youth.

And even when he was living in an unregistered squat on North London in the mid-80s, his paintings were getting a minor cult following. Now, respectably living and working with eight other artists on four floors of a Shoreditch former furniture polish factory, he lectures and writes prolifically on his art, which can fetch anything from £5,000 to £130,000 at auction. “My pictures involve us physically, neurologically, emotionally, imaginatively, in creating an original experience we make ourselves” says the very serious artist with an undiluted sense of the absurd, who likes to sign himself “Pattrick”.