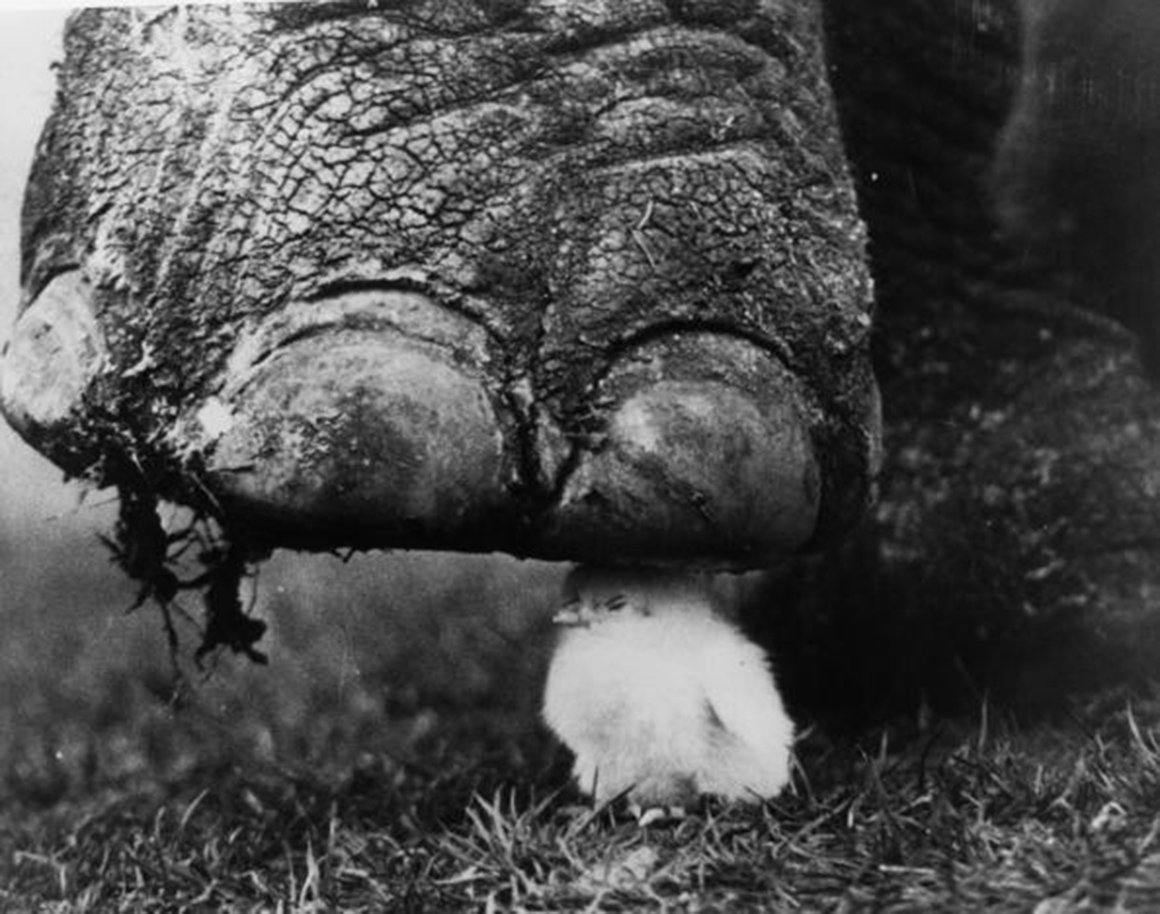 In 1978 Sir Harry Evans, former editor of the Sunday Times and grand statesman of the newspaper industry, produced Pictures on a Page, a book for picture editors in particular and those using pictures in general.

Included in the book was this picture of the elephant’s foot pressing down on the tiny chick. Evans used this as a good example of juxtaposition to illustrate size and scale.

In 1974 the then picture editor of the Daily Express, Struan Couper, was struck by the image because it was a cute Easter Picture. In fact, he was so pleased with it that he used the picture across half of page three of the paper. These were the days when the Daily Express was a broadsheet and the image used on such a grand scale was very effective.

The photograph was taken by a young photographer from Keystone Press Agency, Ian Tyas.

Tyas had developed a strong working relationship with Martin Lacy who was an animal trainer and owner of Sherwood Zoo. Tyas photographed many features for the Keystone Press agency from the zoo - following on the success of this picture he photographed a fox holding a chick in its razor-like teeth.

Ian tells us that Martin Lacey did the hard work - the chick came to no harm. ''I just thought up the idea then lay on my tummy waiting to press the camera button at the right moment as there were no motorised cameras in those days, or if there were I didn't have one.

Tyas, like many photographers in Fleet Street, fell into the trade more by luck than planning. He lived in Dartford in Kent and when he left school he decided to travel. ''I stuck my thumb out on the A2 to Dover with the hope of reaching Paris to form the beginning of my adult life'' he said.

''I survived for six months selling American newspapers outside posh hotels for a commission, and at night playing folk music in various bars and clubs that provided me with meals as well as small change. A youth hostel provided me with a bed.'

''Realising I couldn’t continue with that kind of life, I decide to hitch back to London. Arriving in Normandy in pouring rain I was sheltering under the porch of a church feeling sorry for myself when I worked out what my next step should be …. become a photojournalist and see the world!

''I wrote to all the Fleet Street papers, and photo agencies, and Bertram Garai at Keystone Press Agency offered me a job as a ‘runner boy’ with just enough wages to pay my fare from Dartford'.

''I was soon hooked on the heady aroma of printers’ ink from the huge printing machines as I run between papers delivering the photographs for Keystone Press.

''Still in my teens, I photographed all around me and I learnt to print photographs, which I loved, before joining the features department as a junior photographer. I was working alongside the great Chris Ware who helped and encouraged me a great deal.

''Could one do the same today? Possibly, but with new technology it is far easier to get work seen, but I’m not sure it will be as much fun or enjoyment.''

Ian and his wife Christine now live in the foothills of the French Pyrénées.