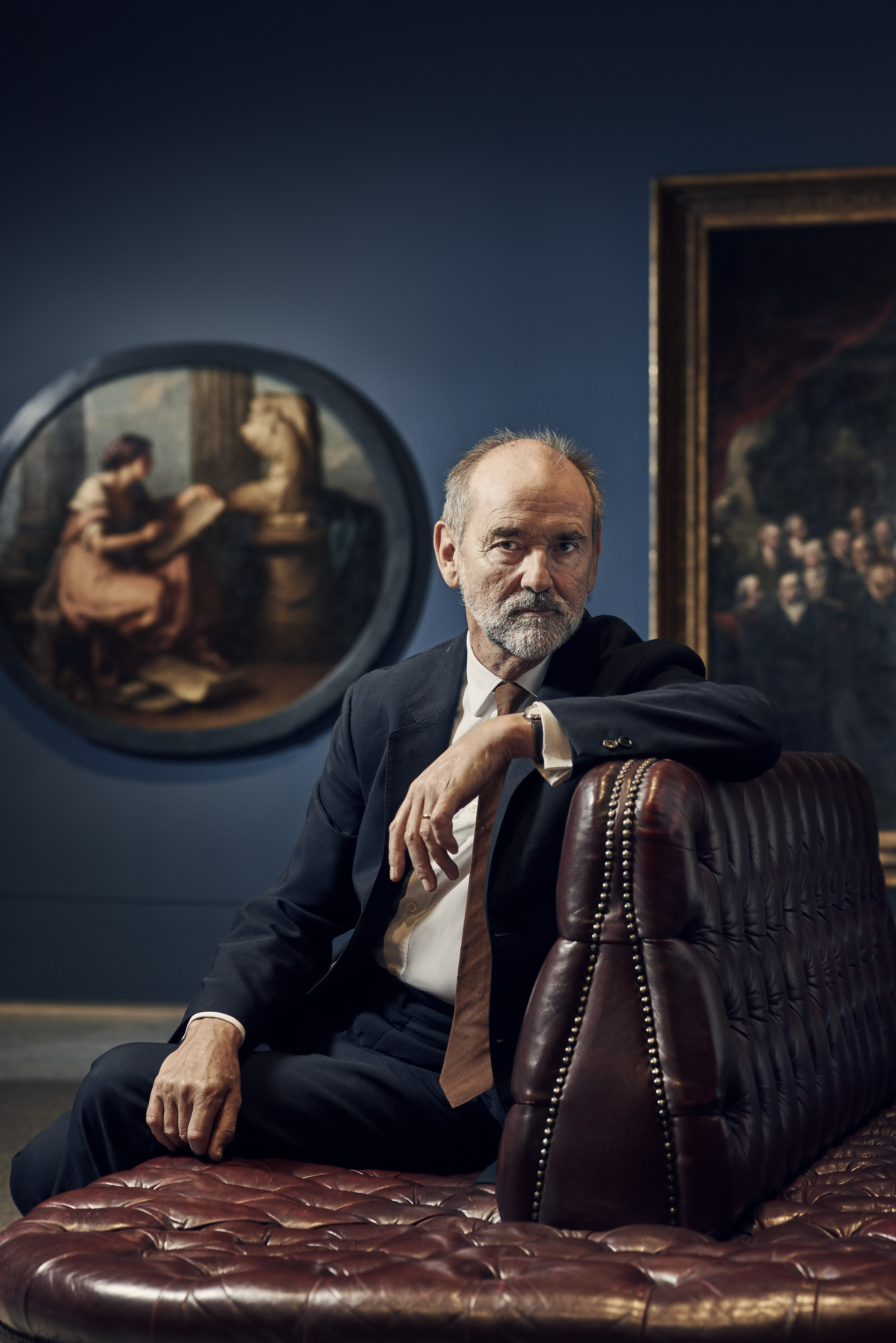 There are four pictures in Christopher Le Brun’s office at the Royal Academy: a huge one of his own, a Sickert of Venice, an early Henry Moore and the one that faces him at his desk which bears no kin to other work in the room. “It’s so full of life” he says. “I can just sit and dream away at this picture”.

It’s Richard Eurich’s Queen of the Sea, chosen from the RA’s collection, a large happy picture painted in 1954, 6ft by 4ft, of the artist’s childhood holiday in Whitby in Coronation Year, 1911, and a celebration full of figures, events, community. It suits Le Brun, a bonhominous man who is as at home at the annual RA dinner as in his studio, and sees the RA as not so much an institution as a gathering of friends.

His own canvasses now are abstract, but just as full of life. Elected as a printmaker, in reality he was always been principally a painter, though he has moved away from the figurative work he was first famous for – great noble horses, often winged, were regular aspects of the mythic narratives. Now his pictures are joyous counterpoints of colour, sometimes in great combative clouds, sometimes in intricate, inquiring striations of brushstrokes, on canvases 5ft by 4ft or more. He sees his development coming in an arc, back to the abstract he began with as a student. There is a visionary feel about the work, in which some have seen the influence of Turner or Blake. “I’m always uncomfortable describing myself in that way, but it’s fair to say it’s a tradition I recognise…” he muses.

This change coincides with his presidency. “Suddenly the work felt like there was more urgency in it, but also I felt more free, as though stored up experience of painting had been allowed to come out somehow”. He reflects that Reynolds, Lawrence, later Millais, were all active painters while they were president, and that continued practice was important to their performance as the head of the RA: “I think it's fundamentally important that you carry on your profession, otherwise I don’t think you’d be of any value to the Academy.” 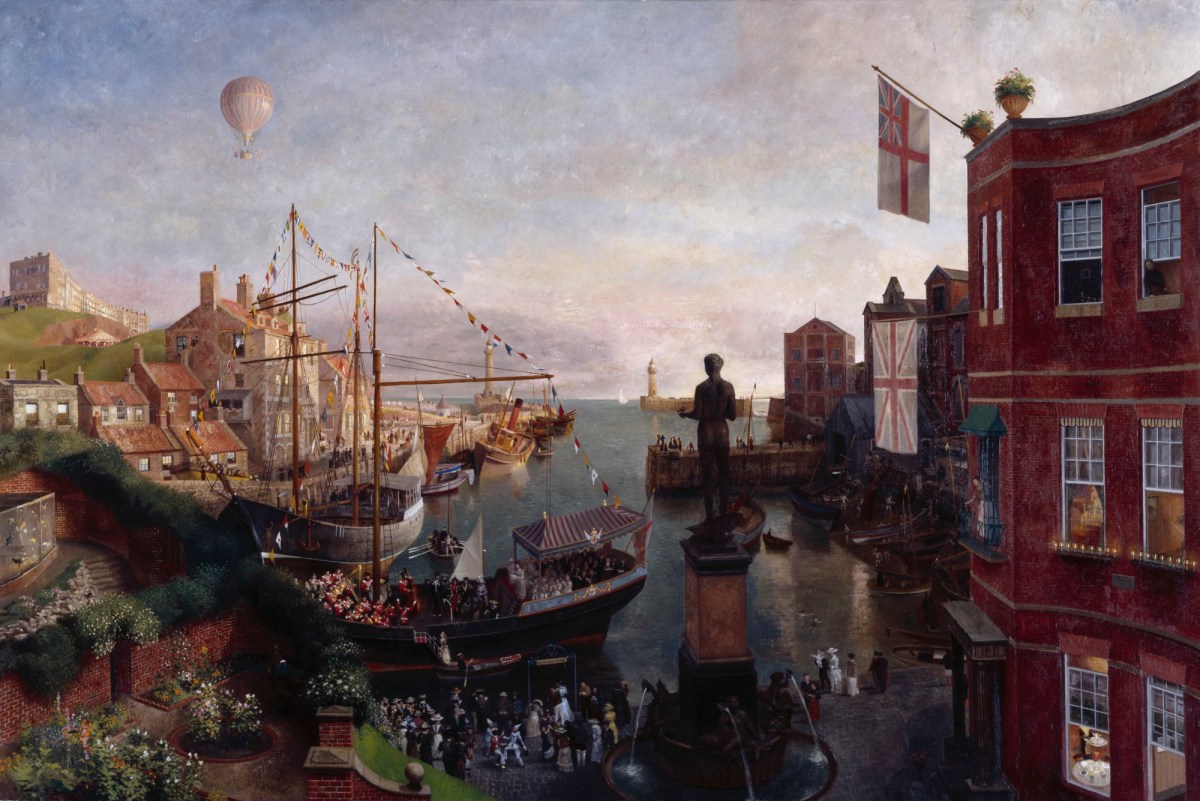 But now Le Brun had decided not to stand for re-election for a ninth year, to devote more time to his studio, with a new association with the Lisson Gallery which has already had a successful show for him. He will hand over to whoever his successor is on December 8.

The first painter president of the Royal Academy in 20 years, Le Brun has probably been the most significant PRA since Reynolds, the first. He was the president who was able to celebrate the RA’s 250th anniversary last year by opening the hitherto much longed for and elusive extension that has doubled its space, multiplied the public amenities and revealed the unique Royal Academy Schools, gathering the £56m needed to bring it off.

For some, he has presided over an anachronism, a reactionary organisation that belongs to an age that can only persist in England; but for Le Brun the RA has undergone its own renaissance. Until fairly recently, however, artists were shunning it as an irrelevance to contemporary art, and when he became a Royal Academician in 1996 it was a risk and you had to wonder if joining might adversely affect your career, he says. Now, it’s an invitation you don’t decline and almost every young artist wants to be a member of what for them is at once a professional association, an exhibition centre and a rather high octane social club.

The Royal Academy was founded by George III in 1768, with his co-conspirators the architect William Chambers and Joshua Reynolds, as they strove to keep up with the cultural politics of Europe, so much more key then than now, where national academies drew the best students who were taught by the best artists (only ours has survived). The English RA would be run by artists, 80 of them, with the King its titular but very much hands-off head, and gets no public subsidy so that everything has to be earned or raised.

Almost all our best artists have been Royal Academicians, elected by their peers who also elect their president, and once a year they get to show their work at the Summer Exhibition. Within a few days of the RA’s foundation the new members had founded the RA Schools, and later the Summer Exhibition to pay for them. To emphasise its accessibility to talent from the poorest families there would be no fees, and there still aren’t.

For most of its first 100 years the Academy was in Somerset House and in 1868 moved to the Palladian former home of the Earl of Burlington off Piccadilly. It was a magnate’s mansion, great salons with high ceilings that served as the galleries, with the RA Schools confined to the servants’ quarters below, out of the public gaze. Burlington Gardens was built behind Burlington House in 1867 for the University of London, and after various occupants, including the Civil Service Commission and the British Museum’s anthropological collections, it was bought by the RA in 2001. 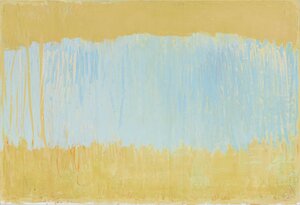 Philip Dowson was the president who took on the redevelopment, but the masterplan he commissioned failed to get Heritage Lottery Fund support. Philip King succeeded him and the knot of the problem was that the two adjacent but unrelated buildings needed to be physically linked, requiring a passage through the schools. The schools refused: impasse.

Under Nicholas Grimshaw’s presidency Le Brun was put in charge of finding a compromise, and with the architect, David Chipperfield, he went to see the keeper (principal of the schools), Maurice Cockrell RA. They took with them the fact that without the passage there could be no expansion, backed up by some romantic philosophy: “It was that this would reveal to the public that we had a school at our heart, a wonderful story”, Le Brun recalls; Cockrell was convinced. “And that was the moment. As soon as that happened, we had a plan”.

It meant that Chipperfield could contrive the essential passage that would run from the Piccadilly entrance to Burlington Gardens behind, through the schools’ domain, his “vault link” that somehow joins two structures built on different levels. And with a little ingenuity it could be done without disturbing the students.

These students are the gold of the Royal Academy, just 17 hand-picked for the post-graduate three-year course each year from up to 800 applicants. And that feels right, too: Le Brun is a natural teacher and has taught at Brighton, The Slade, Chelsea and Wimbledon - he studied at Chelsea and The Slade. He is sharply conscious of the unique teaching resource the Schools have in the 80 RAs: the Academy now also has the historic Life Room, complete with the very bench on which Turner and Constable sat as students, where he and the present RA keeper Rebecca Salter have organised talks.

Le Brun’s accomplice in bringing the remake to success was the RA’s former secretary and chief executive Charles Saumarez Smith, who left at the end of last year and was replaced in May by Axel Rüger, former Director of the Van Gogh Museum in Amsterdam. But Salter has been a valuable lieutenant in the readjustment of the relationship of the academy with the schools – “Definitely a rebalancing”, he says - including the £15m restoration and renewal project for the schools which will begin in a couple of years. “Of course, the Academy set up as a teaching organisation”, he says, “but it was also set up to project the power of British art as it was conceived alongside the great European centres of Paris, Madrid, Rome”.

He leaves with the 21st century version of that mission accomplished. “Now, the RA’s reputation is international and the success of British art has been extraordinary, to the extent that arguably London is up there with New York as a centre of art today. I think that was all envisaged when the King sat down with Reynolds, Chambers and the others. They were trying to get British art on the map, and what you needed for that was an Academy.”