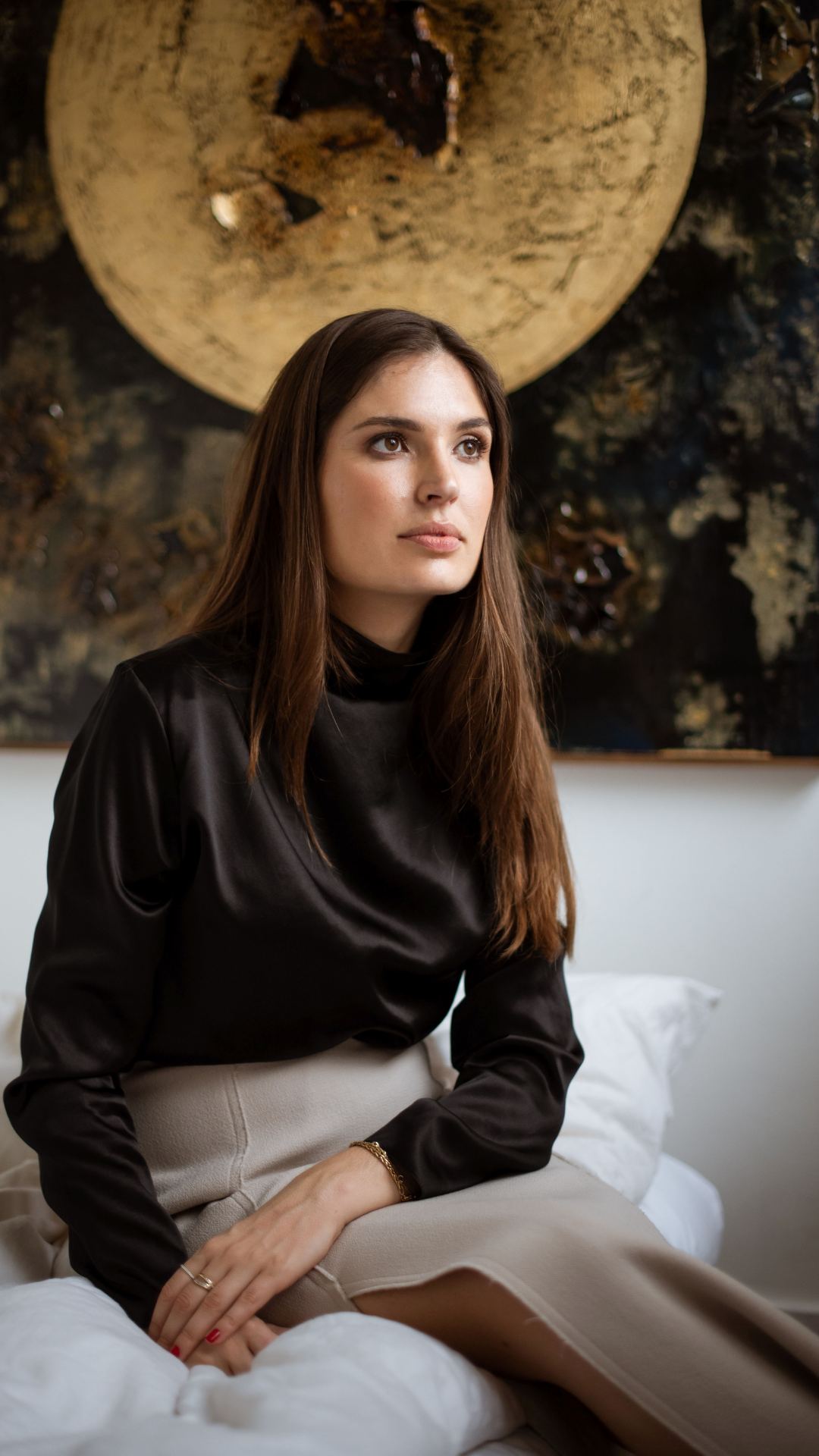 The face of Chloé who is shifting the art story

Marine Tanguy, a young French-born entrepreneur who dropped out of university twice, is quietly and energetically switching the balance of the market in favour of artists.

After four years working in the gallery system, Tanguy concluded that it wasn’t working for artists, and aged 25 she set up her own agency in London. “I put the artist’s story first” she says.

“I learned that artists can’t live off selling one painting every two or three months, and there is so much more they can offer”. Roger Federer, she says, plays sport but he also has a digital strategy – he earns more wearing a Rolex watch than playing tennis. “What my talents want to do is what they love, and I want them to be great artists, but it's mad to think you don’t need revenue for that - 90% of people working in art worked for free when started, 10% survive make an average first year salary of £5,000. So we don’t have most the talented artists, we have the ones who can afford it. I don’t think that's OK”. She calls the artists her “talents” and her organisation works more like a music or literary agent, allowing her talents to make art without worrying about the everyday pressures of professional survival.

Her MTArt, based in Golden Square but with a branch near the Champs Elysees in Paris and another to open next year in Los Angeles, goes beyond the gallery with an eye both for the artist and the client, but with a duty of nurture for the creative. “We’re not just interested in what is hanging on the wall, we go behind the wall” she says. 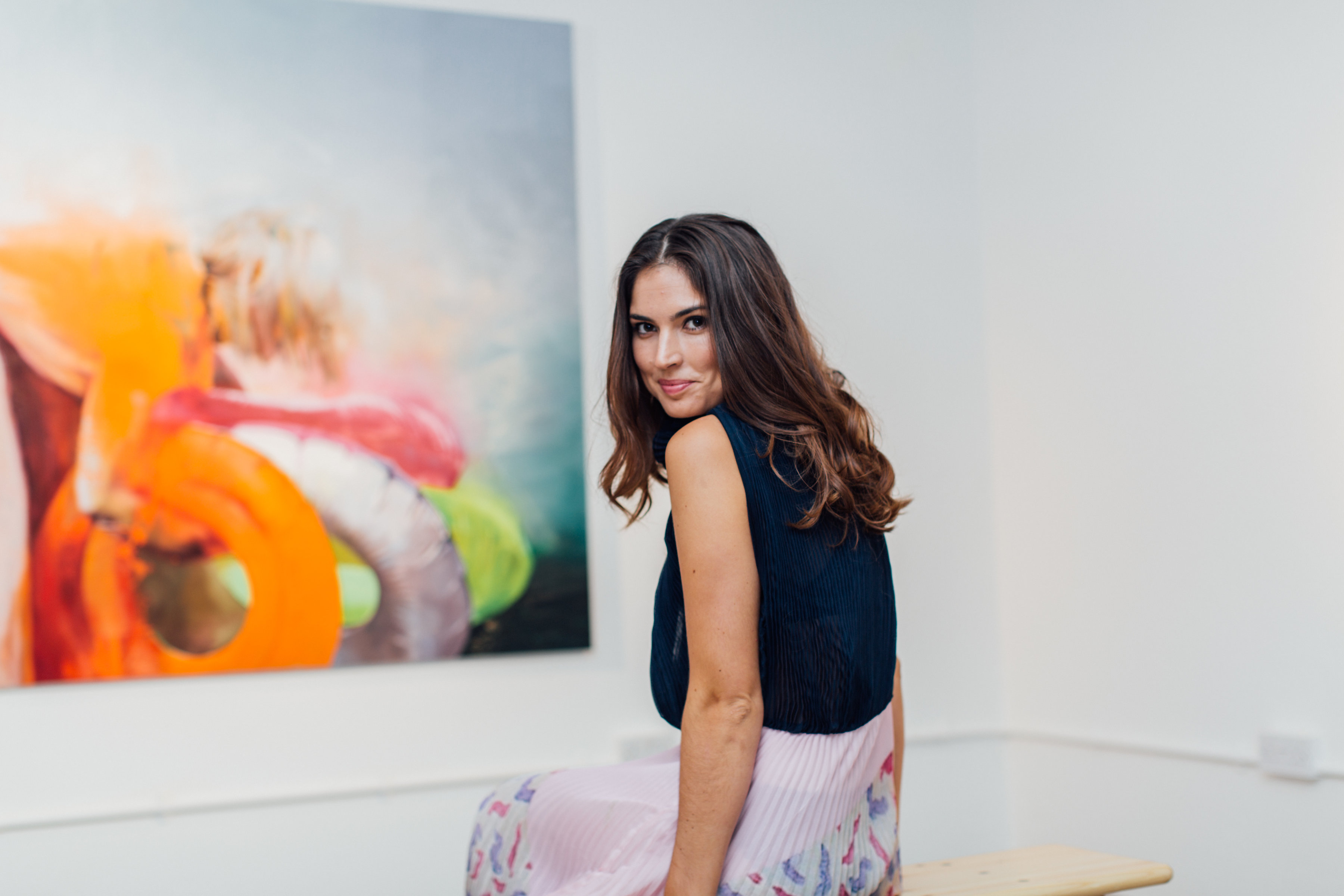 The agency has 15 talents as its frontline, each of whom gets their studio rental paid for, their social media organised, their work promulgated, their intellectual copyright safeguarded, the transportation of their work handled and sales and payments dealt with. In return, the agency takes 30% of any sales (compared with 50% for most commercial galleries) and a work is donated to the MTArt’s own collection by each artist (the collection is currently worth £320,000). There are 30 more artists on its books whose promise is being nursed for full-on promotion later.

Now 30, Marine Tanguy was born on the Île De Ré, the holiday isle off France’s Atlantic coast from La Rochelle, the daughter of schoolteachers. At 19 she dropped out of her philosophy degree course and came to London as an au pair, and an intern on BBC TV’s Culture Show. She began to move in London’s vibrant art world, and a dealer asked her to manage his stand at Mayfair’s PAD art fair.

She enrolled to study art history at Warwick University, but before she could complete the course she was asked to run her first gallery, the Outsiders in Soho. Two years later an American collector and investor, Steph Sebbag, was so impressed by Tanguy’s welcoming approach compared with the indifferent attitudes he found at other galleries that he asked her to help him set up a new gallery in Los Angeles, and in 2014 she opened the De Re Gallery there, with a Hollywood backdrop of glitz and glamour.

And it was in LA that Tanguy had her damascene moment. “The scene there teaches you everything on marketing, promotion, entertainment, but I was not prepared for what I saw – the relationship with art in LA is ambiguous, and while I learned a lot about social media, the press and so on, I didn’t want to be behind someone like Kim Kardashian” she says. “I want to be behind people who have something to say, who have content. I’m not interested in fame”.  She would have taken on Jeff Koons, she says, but “for the creative mind, not the art”.

Although arts schools such as Central St Martins will send artists to MTArt – they are  applying at the rate of 200 a month –Tanguy prefers the talents to have had experience before they are taken on: “I want them to come with an understanding of why they want to be successful and it’s better if they’ve already hit a wall and been able to move on” she says. “It’s a tough career”.

She has an issue with art schools where she feels teachers are really frustrated artists “doing it by default”; art teachers are not thoroughly enough taught to teach, she thinks, too often they merely demonstrate. The talents that are taken on are mostly sought out by a team of six “talent managers”, recruited for their specialist expertise, who bring their finds to a selection committee. Tanguy’s search for new talent managers is constant, and she has five recruitment agencies searching.

Her artists are becoming known, if not yet famous. The painter David Aiu Servan-Schreiber has seen the value of his canvases go from £3,000 to £20,000 in three years; the feminist performance artist Adelaide Damoah has seen the value of her work rise by 436%, from £2,200 to £9,800, in only a year. Their age is immaterial to Tanguy, she knows that promise can catch fire in mid-career – Jasmine Pradissitto broke through with her glass sculptures only after her son had left home for university. Saype, the French street artist whose work was once illegal, became the first artist to be commissioned to create a work on Paris’s Champs de Mars and is now in world-wide demand for his land art. MTArts artists have work in major hotels such as Sofitel in London’s Mayfair, where Servan-Scheiber has an imposing canvas presiding over the ground floor lift corridor, and there are bids in for commissions for Pall Mall and Euston Station among others. Tanguy is working with the likes of the Mayor of London, Aston Martin, Lavazza and the French fashion house Chloé – for which, incidentally, she is currently “The Face” for promotions for the perfume Nomade.

The talents come from different ends of the poverty scale, but are treated equally. “What matters is that you're talented, and if you're talented you have a right to access to a career. We wouldn’t discriminate in favour of under-privileged or privileged” Tanguy says.

Tanguy doesn’t claim to be the first visual artists’ agent, there are others, as well as freelance curators without galleries representing individuals, but she is at the head of a growing field, with others, she says, cutting and pasting details from the MTArts programme. “It’s good, I don’t mind” she says “because we want to change the sector, and this shows it’s happening”.

Her edge is the contacts she has in business, at the head of museums, in city halls and in government offices as well as business houses, people who no longer want to deal with galleries because they get only a part of the service they need. Her power points are in London which she regards as the contemporary art capital (at least until Brexit which she fears is already souring the market), Paris and LA, and she has enthusiastic business investors. In October the agency made as much as the whole previous year, and the annual turnover is now at £2.8m which she regards as modest.

She has a stern ethic and won’t work with street artists who use toxic spray paints; she wouldn’t have considered Gauguin, she says, because of what he did to women; she has fired artists from her stable for being graceless with clients. She had a baby son, Atlas, two months ago but there was no maternity leave: “There isn’t time” she says.

Hitherto the art market has pivoted on the sale room and the commercial gallery, but Tanguy and MTArts believe they are changing the balance for the better, and for ever.  “It’s not so much that we want to democratise art, but we want to democratise artists, making the progenitor of the art the key rather than just a part of the process” she says. “My collectors love the artists, their stories, and if the story’s not there in something we don’t go for it.

“So I put the artist’s story first”.