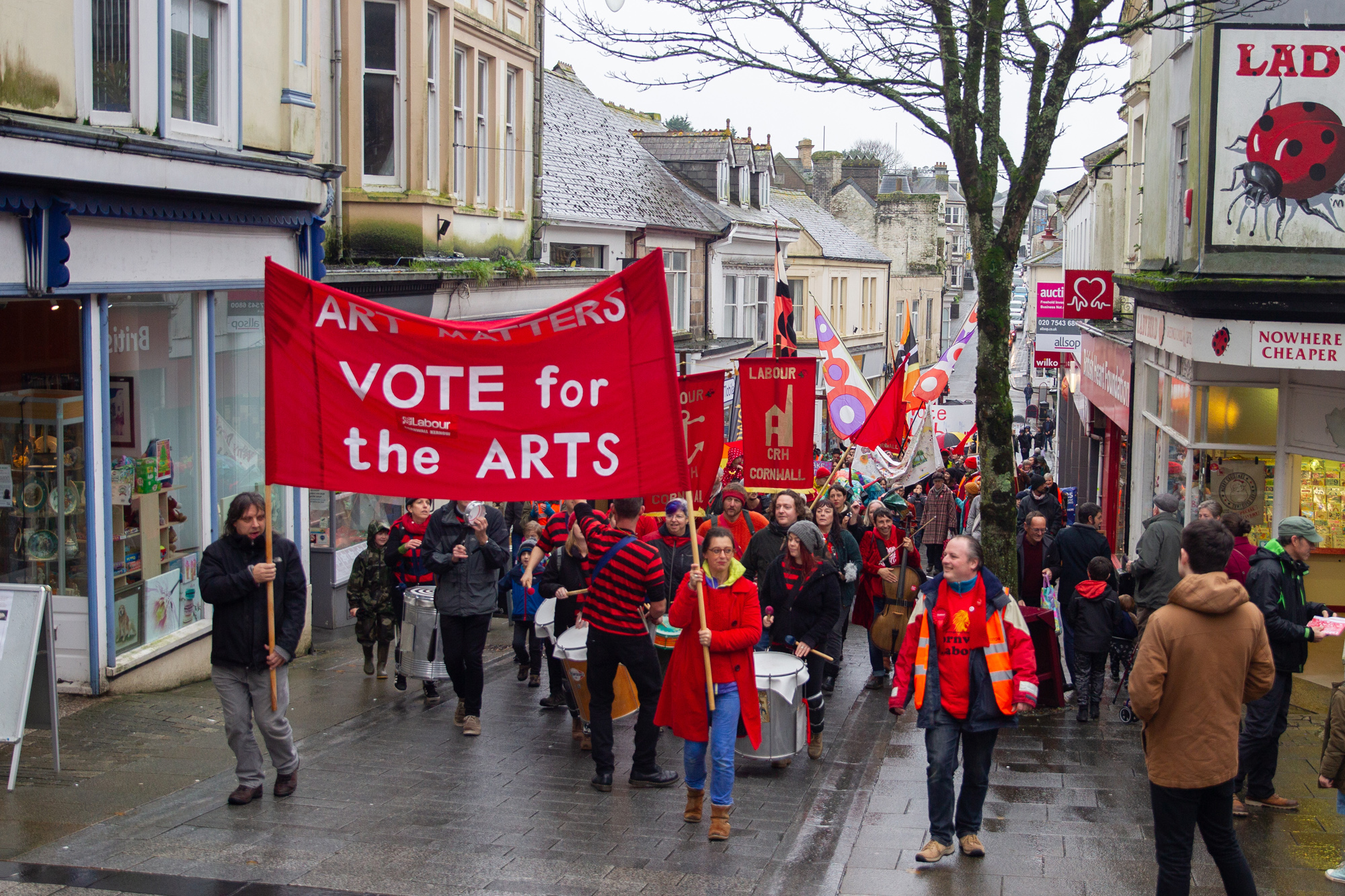 Today’s the day, and one wonders what Nicky Hirst will make of it all. Why Nicky Hirst – because she is the official artist for the UK general election, writes Patrick Kelly.

Hirst was appointed by the Speaker’s Advisory Committee on Works of Art. She is observing the 2019 general election and aims to produce a unique work in response to her experience. According to her artistic CV, Hirst likes to make confusing things into something comprehensible.  She will have her work cut out this time.

She might like to make a start by examining what the parties competing for your votes today have to say about the arts. Once again, in the queue for political airtime, culture is not exactly pressing its nose against the shortly to be opened doors to the cinema. Instead it’s round the corner and out of sight. This lack of interest, as is traditional, is reflected in most, though not all of the party manifestos.

Let’s start with the current incumbents in government. Despite his brief sojourn as a Tory arts spokesman, Prime Minister Boris Johnson has shown little interest in culture since arriving at Number 10. Sure enough, the Conservatives don’t have much to say on the subject in their plan for the next five years of government. However, they are offering an “arts premium” in schools to fund enriching activities for pupils. This is clearly a response to widespread criticism that the arts have been downgraded in secondary schools. But the Tories are not rowing back on the Ebacc; instead they are reiterating their commitment to the “core subjects” of maths, English and science - a commitment which is slowly squeezing the life out of arts in the curriculum.

There’s a promise on lower business rates for high street venues, including cinemas and theatres, and another that the Tories will maintain support for creative industries, through tax reliefs and a restatement of the already announced £250 million cultural capital fund. A Conservative government will continue to support free entry to museums and will also revive Theresa May’s now forgotten idea of a Festival of Great Britain and Northern Ireland 2022, bringing together arts and culture organisations with universities and business to inspire creativity.  And er… that’s it.

There’s not much either in the Liberal Democrats’ manifesto. Besides adding tourism to the ever lengthening list of acronyms of the DCMS, the Lib Dems will support creative industries (and they single out video gaming for some reason), by supporting the Creative Industries Council. They also offer to maintain existing tax supports and intend to tackle “barriers to accessing finance by small creative businesses”. There’s also a line about better copyright and licensing rules and a plan to introduce measures to protect live music venues from planning changes.  The section of the manifesto on arts and culture also promises to protect free entry to museums and National Lottery arts funding, though it’s a little vague on detail. Finally, the Lib Dems do have their sights on Ebacc and will abolish it and ensure that creativity is a core skill in schools.

It’s Labour that has broken with tradition and actually devoted a substantial tranche of its rather lengthy manifesto – 128 pages of it - to the arts, promoting its policies via a special arts manifesto launch attended by a collection of high profile cultural figures.  They reference the pioneering figure of 1960s arts minister Jennie Lee and her pledge that “In any civilised community the arts and associated amenities, serious or comic, light or demanding, must occupy a central place. Their enjoyment should not be regarded as remote from everyday life”.

Corbyn’s Labour promises a Culture White Paper and a co-ordinating committee for arts and culture working across government departments to drive a national cultural renewal.

The party’s charter for the arts also promises to invest £1bn in upgrading and building new libraries, museums, galleries and arts venues, put £175m a year in an arts pupil premium in primary schools and establish a new “Town of Culture” competition, modelled on the existing City of Culture. All this and a promise to maintain free access to national museums and galleries and the abolition of Ebacc.

In the event of a hung Parliament, very much a possible outcome, it’s worth looking at what some of the smaller parties have to say – after all, they could have a big role to play in any future government. The Scottish Nationalists give only scant mention to culture and creativity but point to it as part of Scotland’s economic strength, contributing 80,000 jobs and £7bn to the economy, having grown by 62% since 2008. The party wants tax incentives to continue and they support a streamlined visa scheme for artists. Over in Northern Ireland, the DUP want to see a cultural organisation to bind together the four parts of the UK – and a national cultural wealth plan, which will see more touring exhibitions from national institutions coming to Northern Ireland.

Reaction to the manifesto promises from the arts community (apart from those who turned up to cheer Jeremy Corbyn) has been muted. Caroline Julian, director of policy and programmes of the Creative Industries Federation, says : “It is right that, in different ways, the Conservative, Labour and Liberal Democrat manifestos have all explicitly recognised the world-leading strengths of the UK's creative industries. The CIF welcomes plans for business rates relief for music venues and cinemas and the commitment to maintain support for creative sector tax reliefs. They are also keen on the arts premium, the government promise of better support for the self-employed but it wants creative subjects should be back at the heart of the curriculum”.

The National Campaign for the Arts has produced a prompt sheet for people in the arts world, with a series of questions designed to probe each candidate’s commitment to culture. They include such pertinent questions as what “Will you do to protect arts funding”, “How will you make good arts education available to everyone” and “What will you do to make sure everyone has access to the best art”. A good set of questions – perhaps one of our readers will try their luck with their local candidate and send us the results.

Much of what Labour has to say echoes its commitments in 2017, but missing this time is the promise to put culture at the heart of its industrial strategy, as is specific measures towards addressing the regional imbalance in arts funding.  And the Tories in 2017? They too promised to ensure more arts support is based outside London. Strangely, that’s not in this year’s edition.

Election promises have been a debased currency for some time now, and scepticism is an ingrained response in the cultural world to politicians regular displays of “treats to come”, once they have your vote in the bag.  But this year, the continuing furore over fake news and the Prime Minister’s dubious relationship with the truth have ensured that the commitments made in 2019 manifestos will be treated with even more caution than usual. Now how will the Official Artist for the 2019 General Election come up with something to reflect that?