The director of one of the world’s most successful but lesser known art museums was in London this week to open the co-curated blockbuster Picasso and Paper exhibition at the Royal Academy. The institution is the Cleveland Museum of Art (CMA), and it has important lessons for British museums public galleries.

Dr William Griswold became director of CMA in 2014, “a lesser known jewel in the museum scene” he called it, two years before its centenary. It was born and is still sustained by local generosity and, he says, although it only has around 60,000 objects each one is a masterpiece. 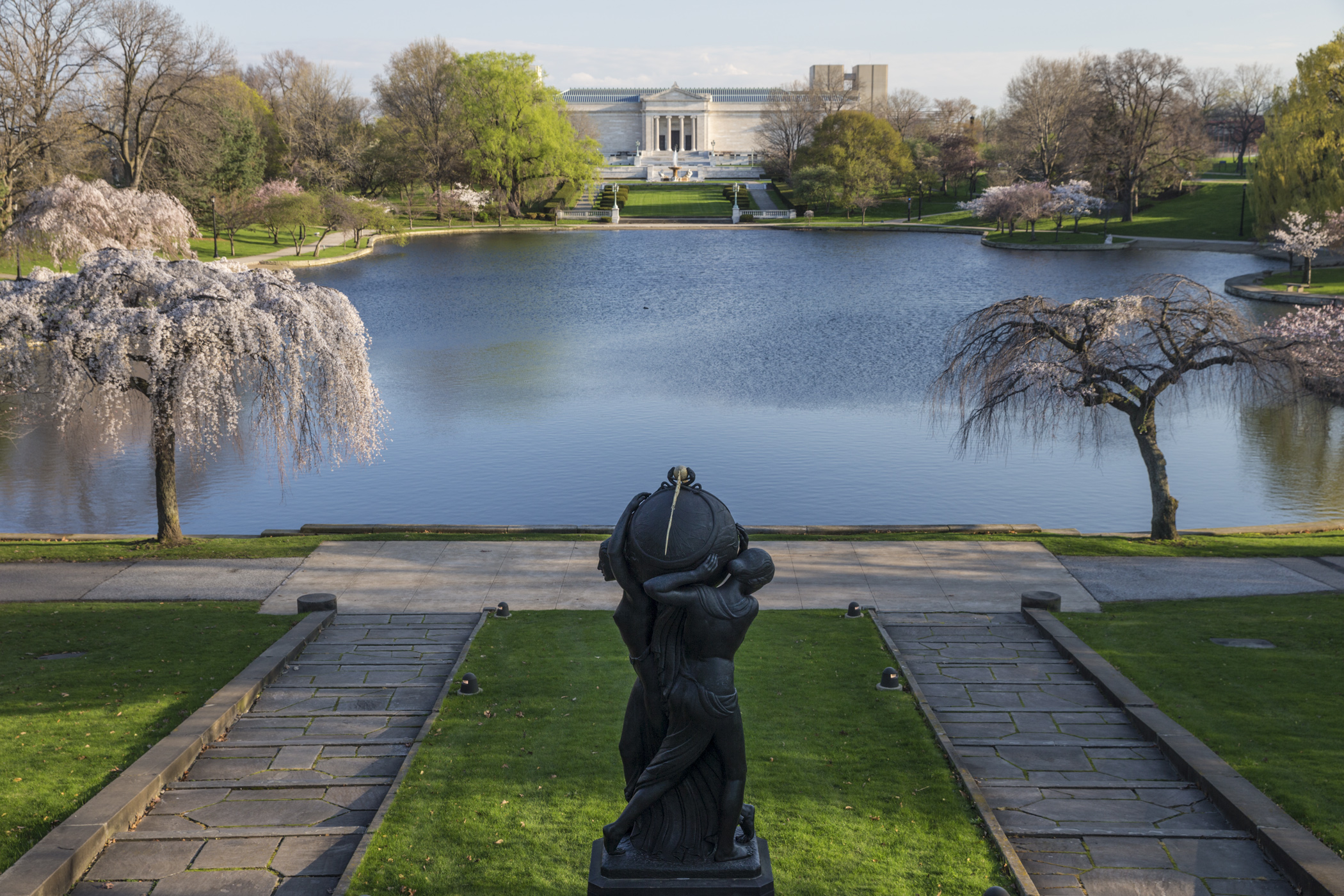 It is a marble neo-classical sprawl of a palace set in a roiling park, now with a bronze Rodin’s The Thinker in front of its entrance. It was built when Cleveland was an industrial powerhouse, the sixth largest city in the States, by three of its industrial titans on land given by one of the founders of Western Union Telegraph, Jephtha Wade, “for the benefit of all the people for ever”. With the industry gone the city is now the nation’s 33rd largest, but the museum has prospered and flourished.

For almost all its 103 years it has been rare among American museums in that it has had free admission, thanks to its enormous endowment, to date worth £580m. Sixty years ago it was bequeathed another £25m by the mining magnate Leonard Hanna, which meant it could compete on the market with anyone

The CMA is set in an African-American quarter of modern Cleveland and as part of Griswold’s strategic plan is adjusting its collection and offer to make its doorstep audience feel welcome. Schoolchildren have their own days when they have the free run of the place, and undergraduates are encouraged to conduct their own tours, for which they are paid. It has never been a tourism magnet, with around 780,000 visitors a year, but it is rejoicing now in its new £240m Vinoly-designed extension which Griswold will use to open up the museum’s art to many more with “a thousand programmes”.

Despite its prosperity the museum can no longer compete on the market as it once did, but what it has acquired has made it a frequent target for loans for exhibitions all over the world.  It’s got a life-size bronze Apollo believed to be by Praxiteles himself, for instance; the only Caravaggio altar piece in the United States; it has Rembrandt, Turner, Warhol, and Picasso’s great Blue Period painting La Vie, a centrepiece of the RA/CMA show, which is at the RA until April 13 and opens in Cleveland in May. CMA also has a long-standing speciality in Chinese, Far Eastern and South Asian art. 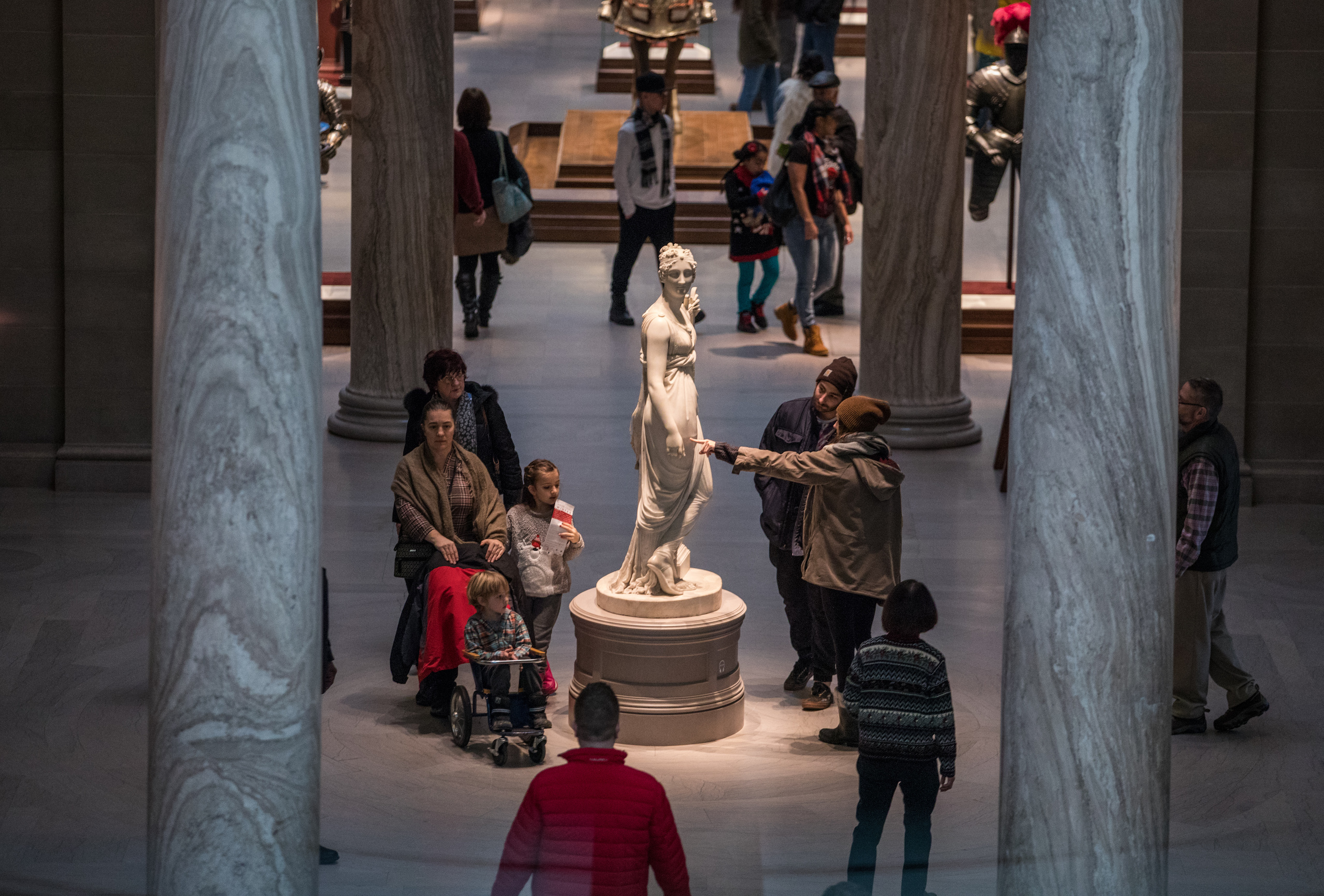 CMA has used its wealth to turn itself into one of the world’s most technologically advanced galleries in the world, and even more open by making its whole collection available for downloading in high definition on the internet. Its Artlens Gallery is a series of interactive displays on a 40-foot wall where visitors can browse the whole collection digitally.

And at a time when western institutions are agonising over allegedly looted art and artefacts and whether or not they should be returned, the CMA has never been in doubt that whatever they have that they have no moral right to, however important as a part of its collection, it should go back – Griswold is chair of the federal Association of Arts Museum Directors’ task force on  archaeological material and ancient art which oversees the return objects.

Four years ago it was brought to his notice by the government of Cambodia that his institution had a 10th century statue of the Hindu monkey god Hanuman, which had been looted from the sacred KohKwer temple complex either during the country’s French occupation or during its 19760s civil war.

Relations with the kingdom of Cambodia had hitherto been at best cool, but Griswold did not hesitate and not only approved the return of the piece but colluded with the Cambodian government to make an elaborate presentation of it under a new Cultural Co-operation Agreement, getting wide publicity and newly warm association. 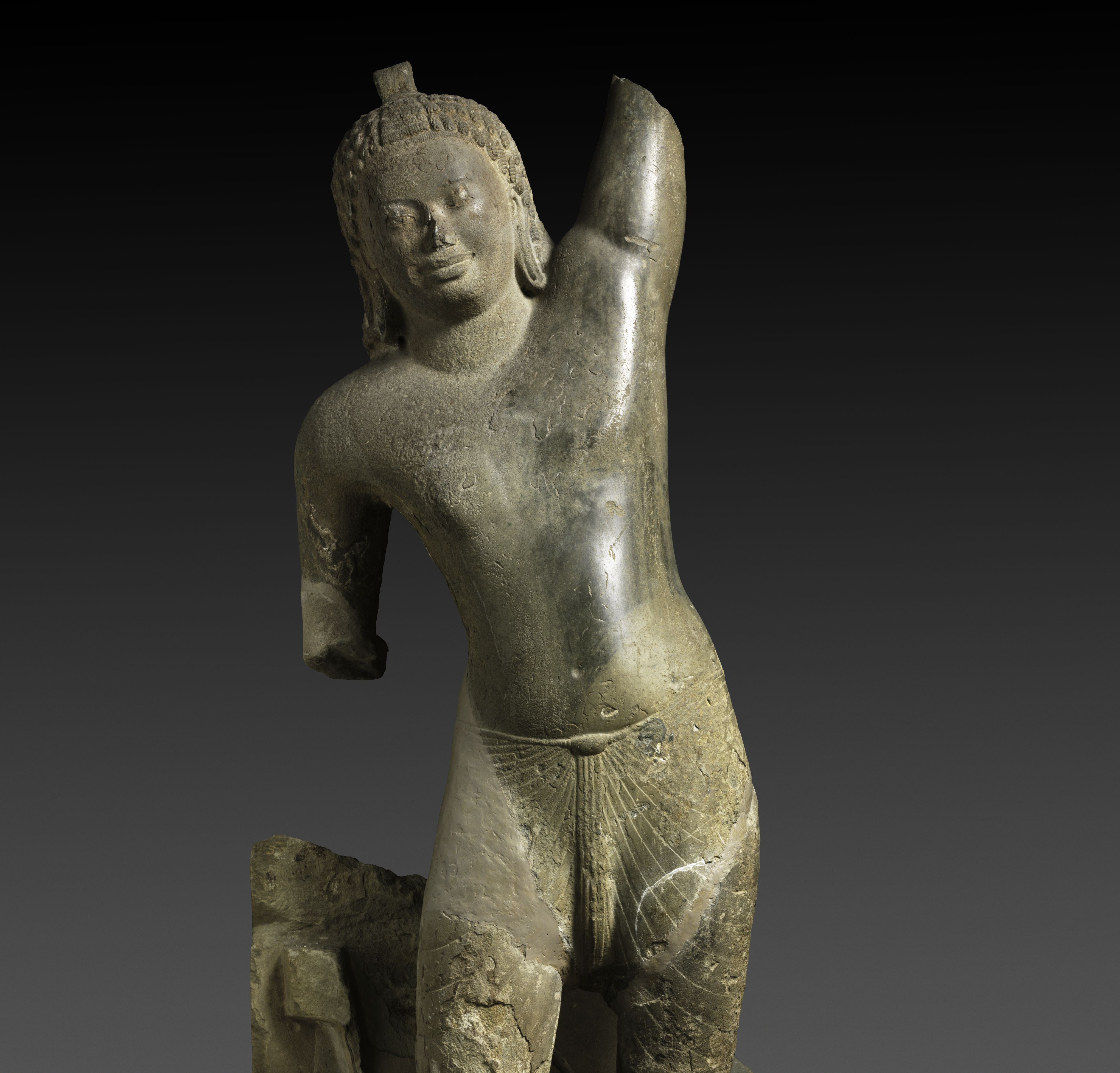 This has led to a major discovery and forthcoming exhibition. CMA had, legitimately, an even older monumental sandstone statue of the Hindu god Krishna, in fragments. The National Museum of Cambodia in Phnom Penh had one two. The new friendliness between the curators of the two countries meant they could match the CMA Krishna with the Cambodians’ and they found that each was a mixture of fragments belonging to both. They have been able to restore both, and in the autumn the museum will present its first ever exhibition devoted to one of the earliest major Hindu sites, its Sacred Mountain, with other objects form the period but with  virtual reality technology recreating the scene of the stature’s original home in the 7th century AD.

And behind the exhibition as sponsor alongside Microsoft is a local power couple, the singer Rachel Carmi and her husband the technology millionaire Irad, underlining the CMA’s unique character as a local museum with global impact. The exhibition runs from October 18 to January 3 next year.

“Collaboration with our Cambodian and French colleagues and advances ion technology were essential for the successful new reconstruction” Griswold said. “The exhibition shares the incredible story of how the discoveries and conservation efforts have evolved since the late 1880s and presents what we have learned about Krishna’s place at the site itself.”

Griswold is an alumnus of the Courtauld Institute, where he did his PhD, and so is well versed in the collections and tribulations of our art collections as they struggle to fund themselves and organise exhibitions exciting enough to attract visitors. He is loath to give advice, he says, but allows that the lessons are plain. 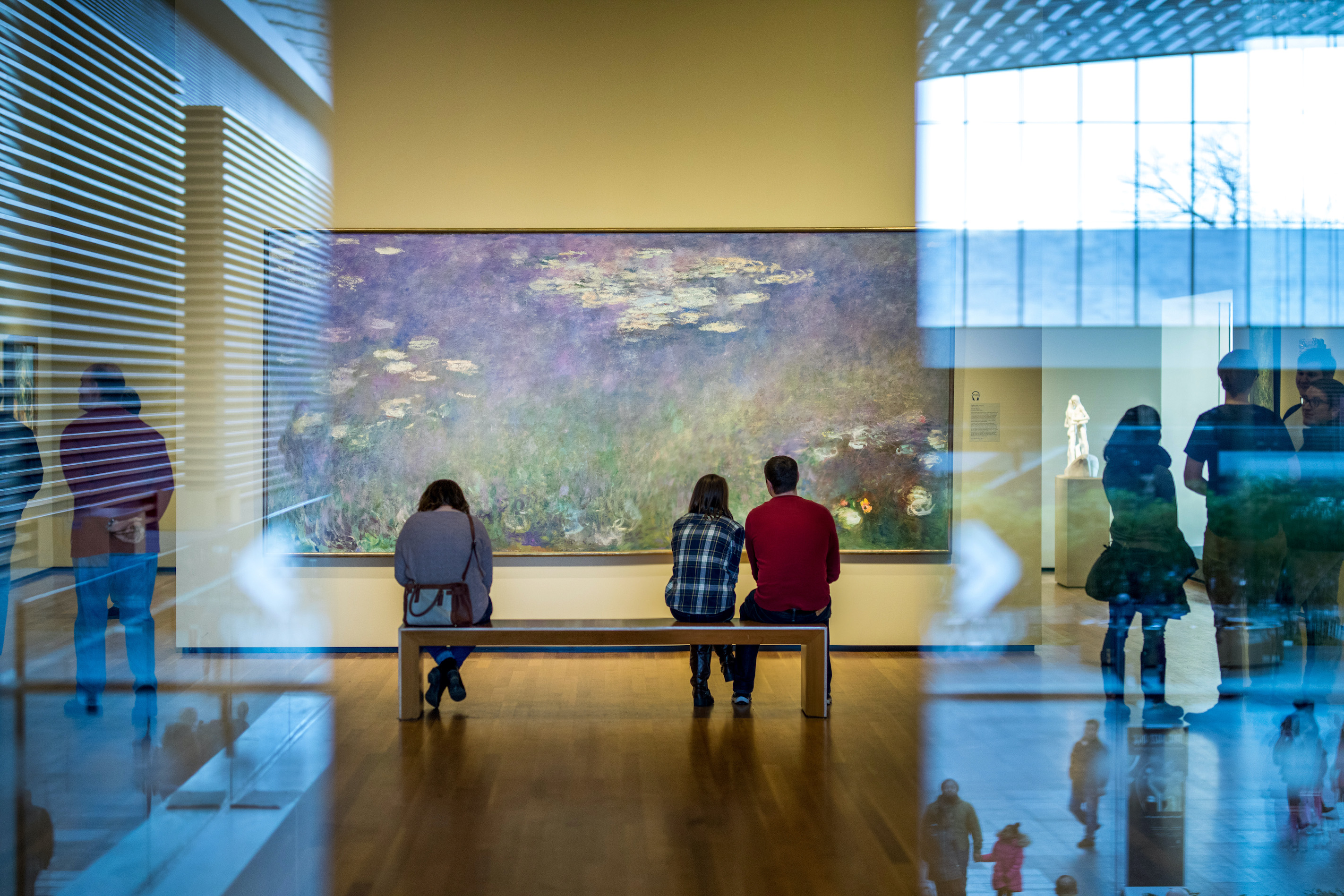 The first is to make a fuss of the immediate neighbourhood and its inhabitants. Their support both physically and financially can be crucial, however humble the neighbours’ contribution - pure philanthropy at all levels.

The second is to harness technology to make collections as available to all sections of the visiting public as possible.

Third, the government has to give the tax breaks American governments have always offered instead of subsidy, and the British situation now is ripe for the Treasury to rethink its indifferent attitude to our museums’ and galleries’ needs in a fiscal way.

“It’s not easy to shift to the US fundraising model, but it has worked for us historically and – look at us – it works now” he said.