When in 2013 the £89m performing arts centre Milton Court opened in Silk Street in the City of London its architect, David Walker, said it had no right to be there.

“The miracle is that it exists” he told AI. “There’s an alchemy of timing when the needs of both sides of a private/public partnership come together. It doesn’t often happen, but it has here.”

Milton Court is one of London’s three main chamber music public venues, but it is much more. It has a 608-seat concert hall with a flexible acoustic that musicians at all stages of their careers cherish, a 233-seat theatre where the conservatoire puts on a full-scale opera three times a year (with an acoustic sweet spot that singers fight for), a studio theatre, three rehearsal rooms and a TV studios suite.

The miracle in 2013 was of the matching of needs of the Guildhall School of Music and Drama and Heron, the developer of a 34-storey residential tower Milton Court is a part of, a miracle wrought by the Corporation of London, the planning authority, freeholder and proprietor of the Guildhall, meaning that the cost of creating the arts centre was absorbed entirely by the developer.

Since then, the alchemy has stretched to the art, and the unique relationship between the Guildhall’s Milton Court and the Barbican Arts Centre 100 yards away. The proximity, at one step removed, is key to their joint future. 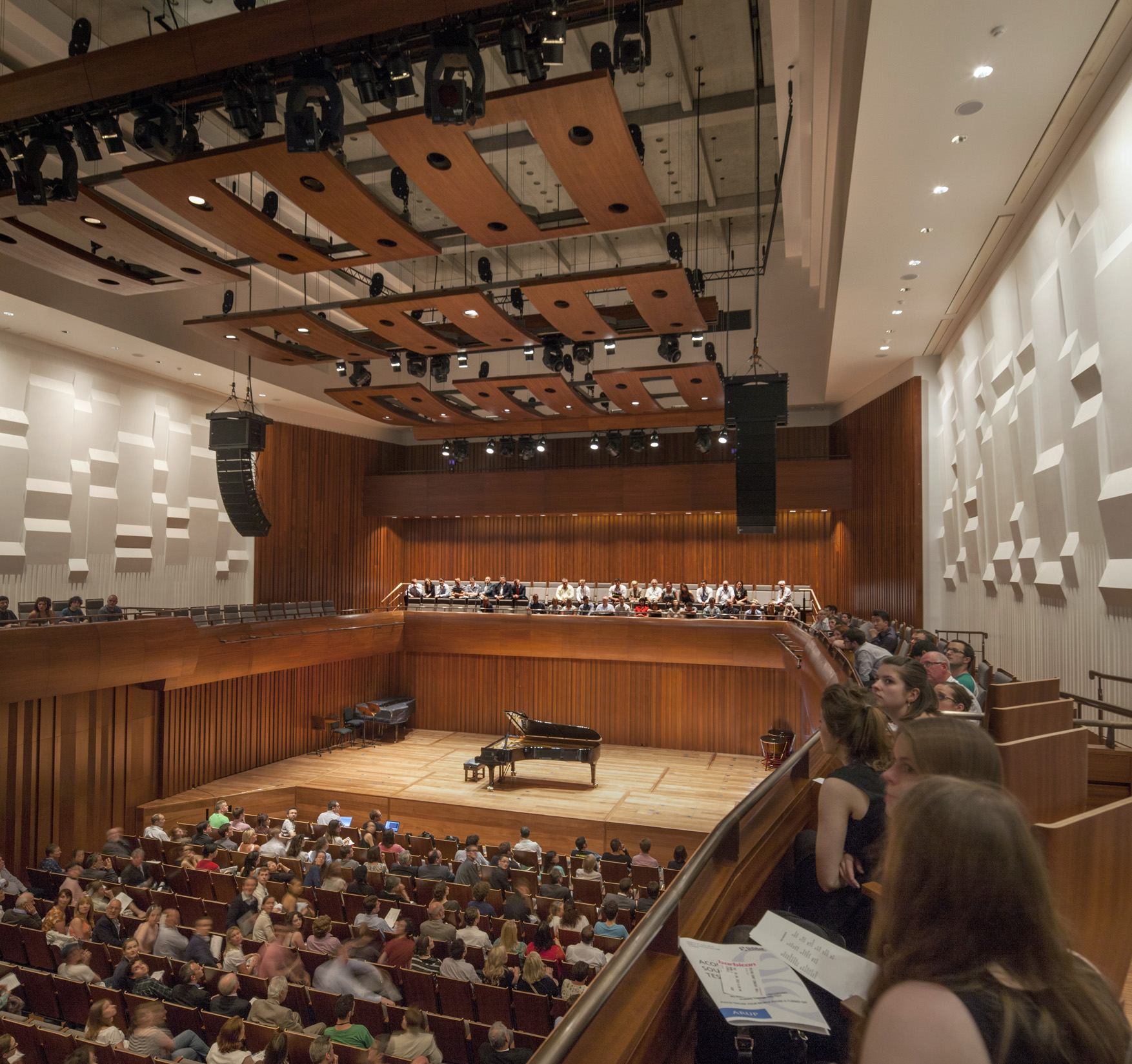 “This space is the nexus between the Barbican and Guildhall, it gives rise to so many ideas, often the stimulus of discussions” says Huw Humphreys, the Barbican’s head of music. “It’s more than a partnership, it's a symbiosis” says the Guildhall vice-principal and director of music Jonathan Vaughan. “We think the same.”

The partnership, including the Barbican’s resident London Symphony Orchestra (of which Vaughan as a player was once chairman), will be even more vital as plans become more detailed for a new £288m Centre for Music

The Guildhall School of Music opened in a disused City warehouse in 1880, moving its 62 part-time students to purpose-built premises seven years later. In the 1920s it added speech, voice and acting classes, and in 1935 the word Drama to its title.  In 1977 it moved to new premises designed for it in the Barbican development. Its alumni include Tasmin Little, Bryn Terfel and Jacqueline du Pré, and actors Eileen Atkins, Daniel Craig and Simon Russel Beale. What it did not have was its own versatile performance space, and had to go to St Bride’s Theatre off Fleet Street for many productions.

The Barbican Centre was built as part of the development on the Blitz-devastated Cripplegate area of the City, and after several delays it opened to the public in 1984 with a theatre, a concert hall, a cinema and an exhibition space. It had no chamber concert hall. 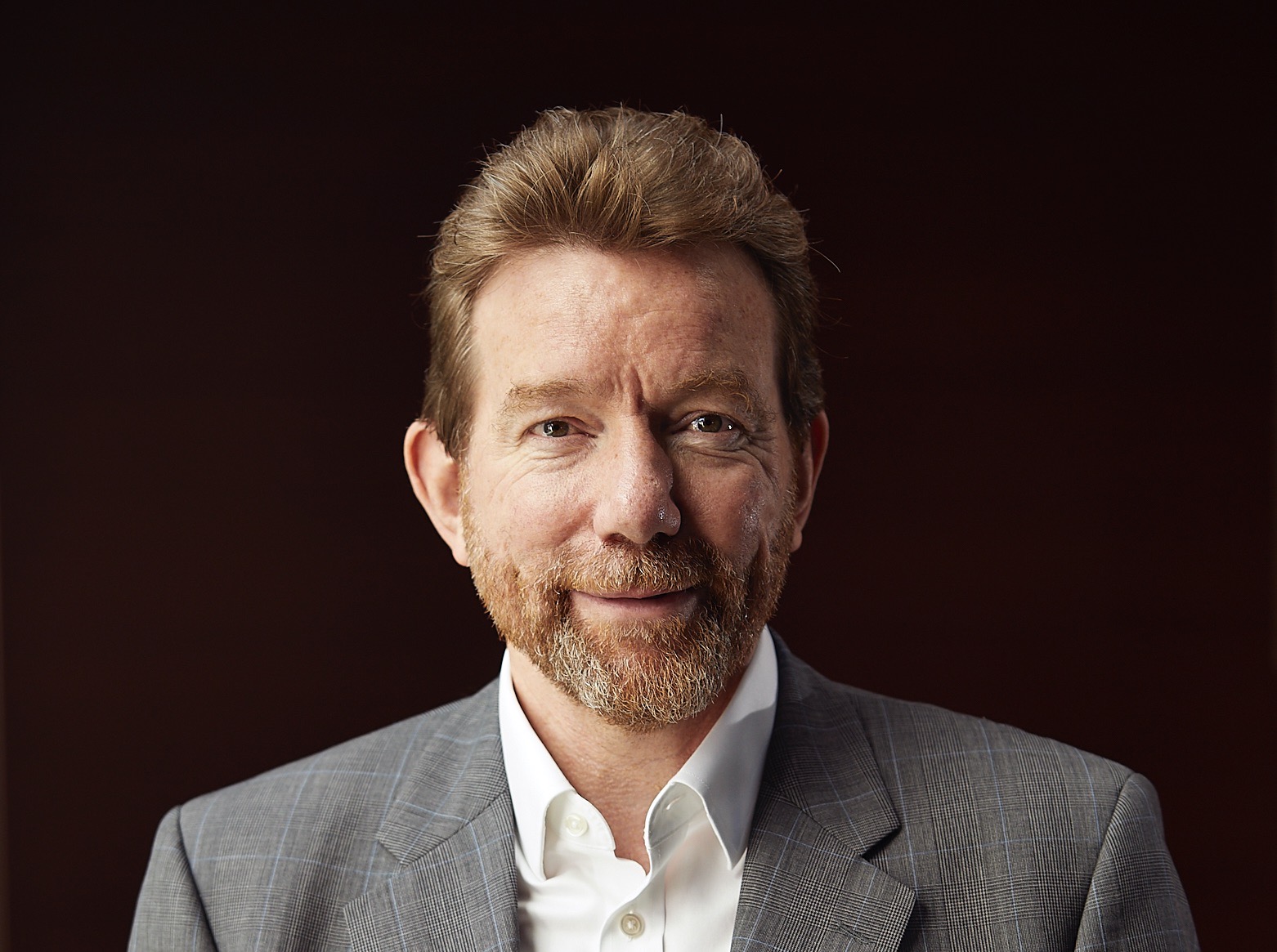 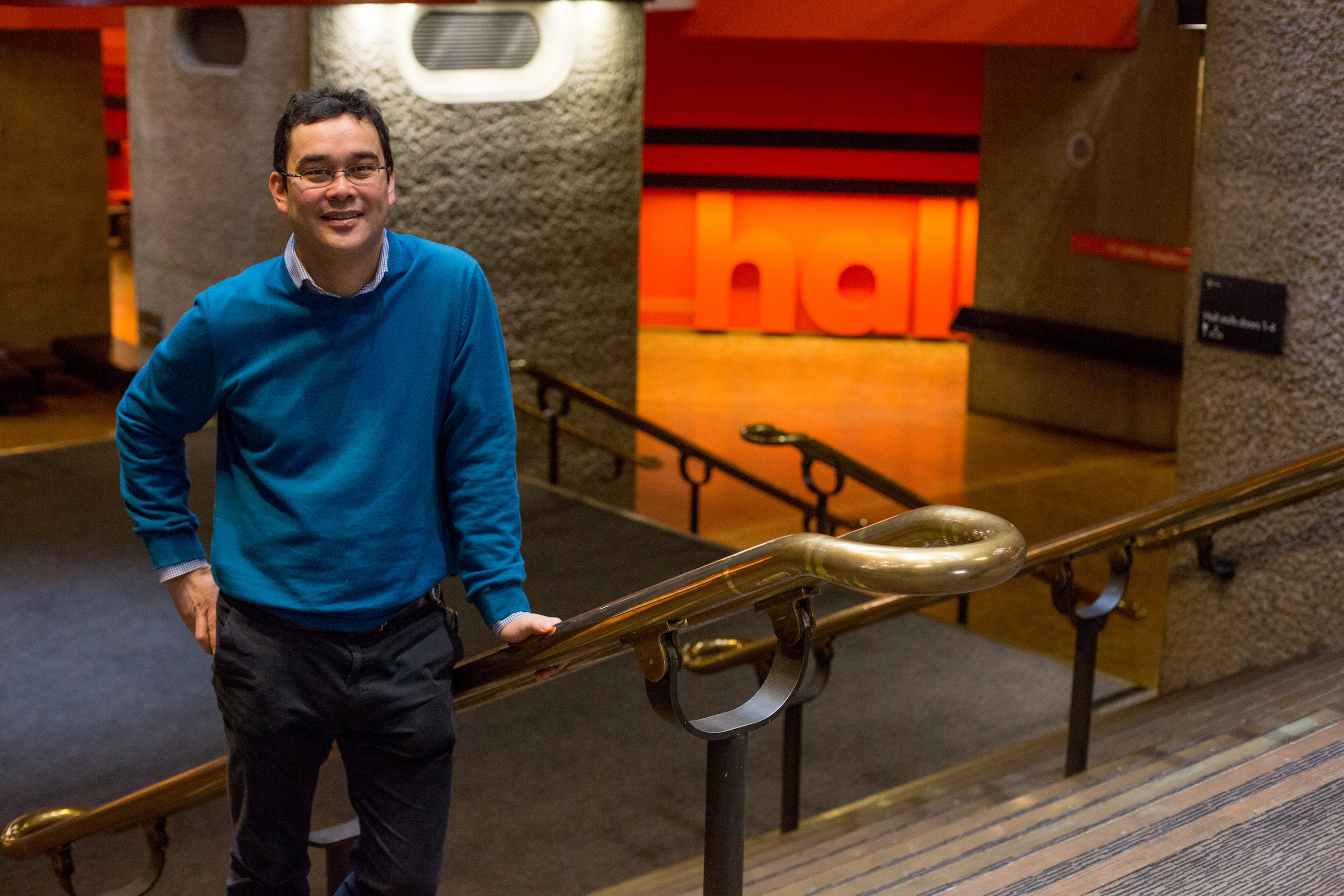 The performance centre had long been a growing priority for the development of the school, and when it finally came to fruition it had been 17 years on the drawing board, gently pushed along by the paternal Corporation of London, the wealthiest local authority in the country. “The corporation is often painted as bureaucratic, conservative, backward looking, difficult… So it can be, but every now and then it does have the capacity to do something really shattering” said the former principal, Sir Barry Ife. “And they’ve done it here, as they did with the Barbican”.

And the partnership is looking earnestly into the future. Planning meetings for the new Centre for Music involving the LSO, the Barbican and the Guildhall are on a weekly basis, though it may be ten years before it opens, “…looking at things like our production arts, how music in the future may have more audio visual cross collaboration approaches, digital benefits, web digital benefits of dissemination…” Vaughan says.

And in May the partnership is to launch a new research institute into the performing arts and social impact, so that when the centre is built the institute will be able to hit the ground running and move in as an intrinsic part.

Meanwhile, the Guildhall has grown from the 900 students of 2013 to 1,100, and Milton Court has developed its role both as a public venue and a conservatoire workshop. It has more than 300 public performances a year, jointly programmed by Vaughan and Humphreys, who meet about once a week informally to discuss projects, some which they will take back to colleagues. “It’s second nature to think of the Guildhall when we're programming” Humphreys says. As for the Barbican having its chamber music hall, Milton Court provides 40 slots a year for the likes of the Britten Sinfonia, the Academy of Ancient Music and the BBC Singers.

The most eye-catching examples of how the Barbican-Guildhall synergy works is in its sharing of the talents of their artists in residence. 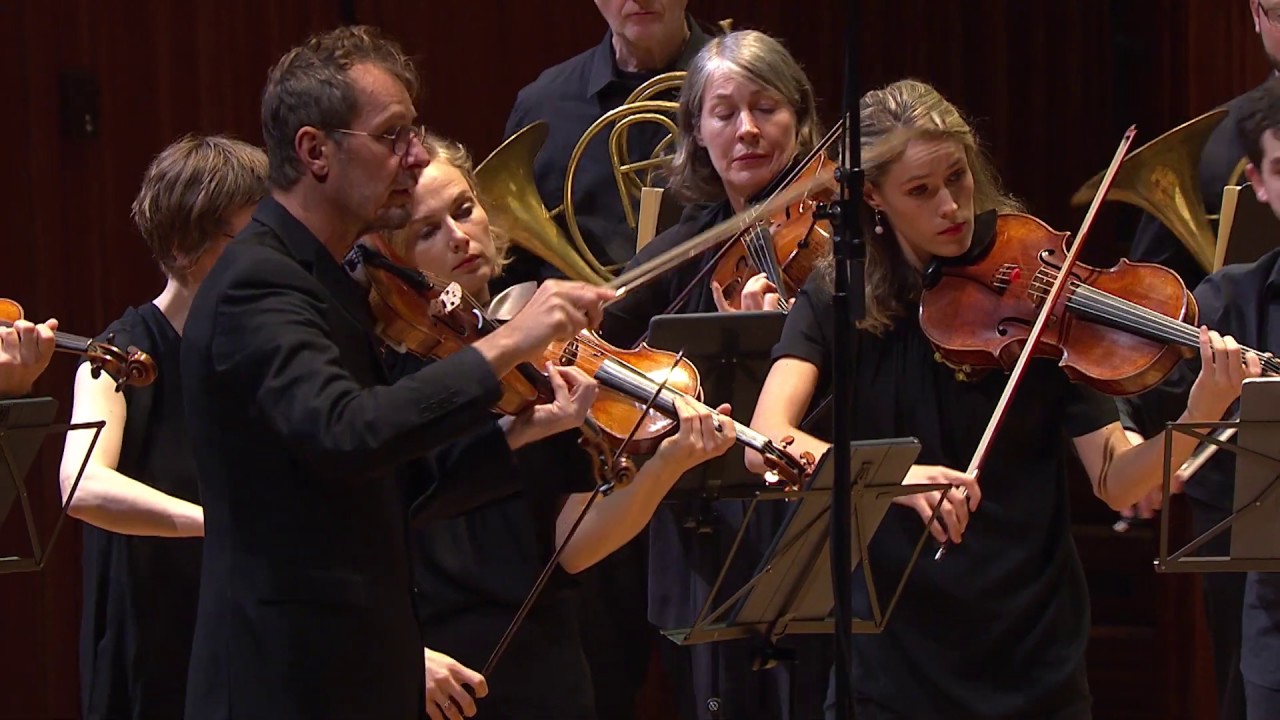 The extraordinary 17-piece string Australian Chamber Orchestra (ACO) under Richard Tognetti, which plays standing to give their often radical performances more vigour, had its second of three annual residencies there in October, beginning with a “re-imagining” of Bach’s Goldberg Variations followed by a new cross-discipline piece, and rounding up with Britten and Vaughan Williams played alongside Guildhall musicians, all in the Milton Court concert hall and programmed by Humphreys.

“It’s a completely visceral experience” says Vaughan of the ACO. “They are blood and guts, they play with a stinging abandon but at the same time very precisely. For our students, they just love that sense of passion and risk taking – you can disagree with what they’re doing but you cannot ignore it.”

Alison Balsom is more than a virtuoso trumpet player, she is arguably the world’s best. She learned her art at the Guildhall, is now a visiting professor there and this year an artist in residence with a programme of astonishing range. In October she performed Baroque music with the English Concert in the Barbican Hall; in March she joins the Guildhall Jazz Orchestra in Milton Court for Sketches in Spain, Miles Davis’s jazz take on Rodrigo’s Gardens of Aranjuez; and in May she is in Milton Court again to tackle Harrison Birtwistle. 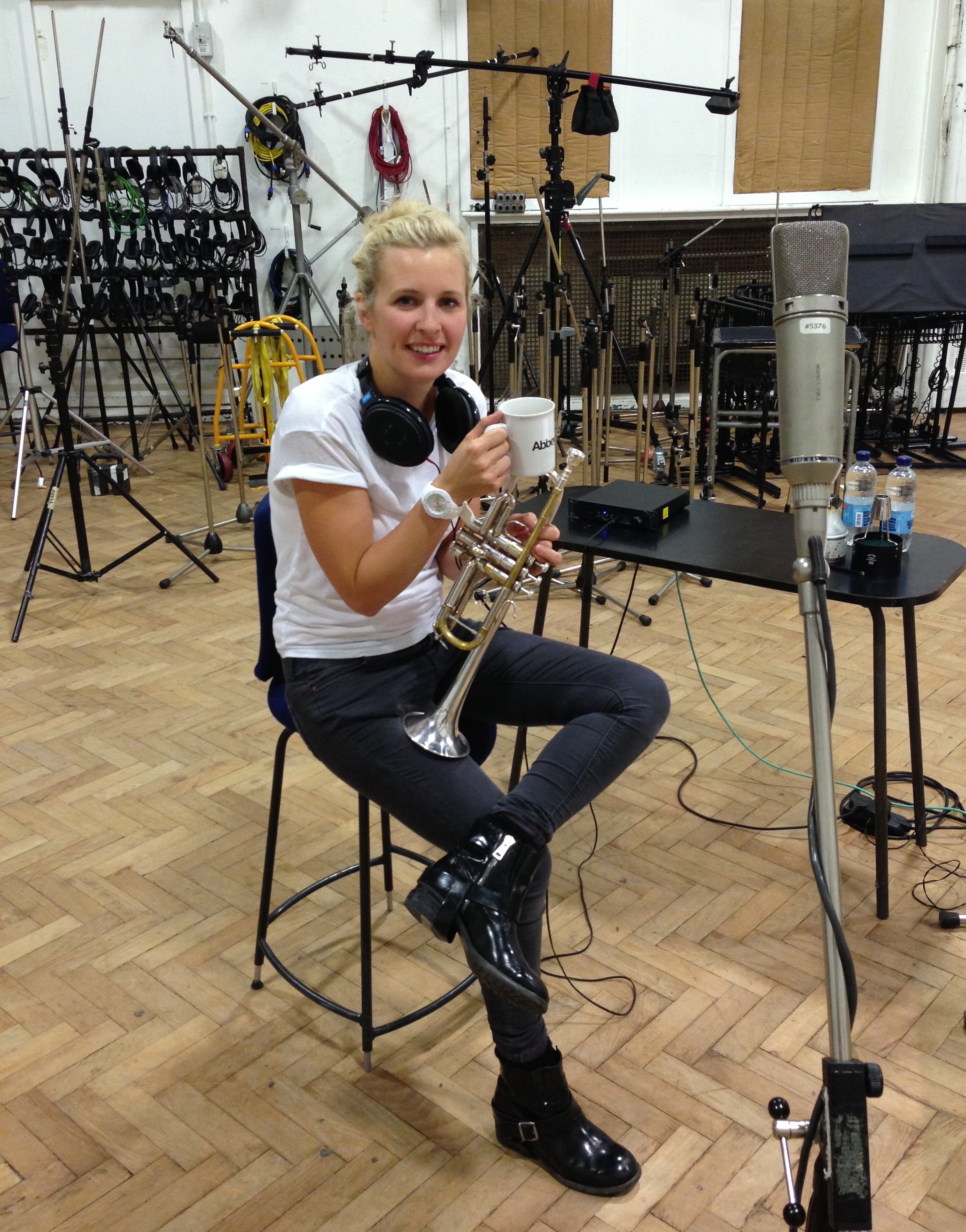 “Balsom is interesting” Vaughan says. “She is someone who exemplifies by the fact that she has had to go and create and find and adapt new music for her instrument, and challenge associations about gender, even creating her own festivals… And she loves coming here.”

Visiting performers like Tognetti and his ACO and Balsom happily give masterclasses and workshops for the students as part of their residencies. “What we're trying to do” Vaughan says “is take the best trained musicians in the world and empower them with the skills to determine their own careers, and having role models like Richard and Alison means beginning to look at their own careers. They don’t have to be waiting for someone to impose a series of concerts on them, they can get up and do that for themselves.

“The way the music industry is going to head is critical to us” he adds. “With artists in residence like these we're looking at artistic citizenship, to be responsible, either politically or artistically. These are exactly the artists to represent that.”