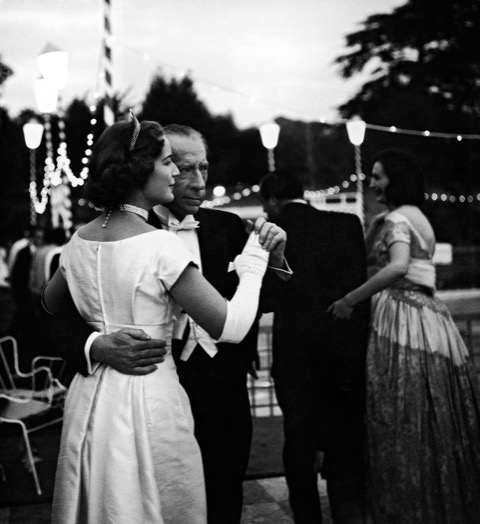 Harry Benson and The Getty Party, Sutton Place, Guildford, 5am on 30th June 1960

The span of work of Harry Benson is huge. And brilliant. From kids in the Gorbals in the 1950s to Melania and Donald Trump in 2005.

Along the way he has captured the Beatles, Dolly Parton, and every U.S. president since Dwight D Eisenhower, and photographed the terrorist attack on the Twin Towers on September 11, 2001.

Born in Glasgow in 1929, expelled from school at 13, his dad bought him a camera with just to keep him out of trouble. He started his photographic career doing weddings, then joined a local news agency and later went on to work for the Daily Sketch in Scotland. He won the British Press Photographer of the Year Award in 1958 and moved to London where he found work with the Daily Express after he gate-crashed a party given by the son of the paper’s proprietor.

While working for the Express a break came in 1964 when he was sent to cover the Beatles' first tour of the USA, and his work received worldwide acclaim, mainly because of the closeness of his relationship with the band.

1968 he left the Express to work for Time Magazine, a lifetime ambition, where he became one of their most prolific photographers. His charm and wit got him into events and places that others would not have had access to, but his Fleet Street nous was not far away.

David Friend of Vanity Fair remembers: “Benson was renowned for his stealth. He once swiped unsuspecting journalists' shoes from outside their hotel room doors (to get a jump on them in the morning). On another occasion, after three of his competitors plotted to bounce him off a party guest list (so that he couldn't photograph an evening affair), he repaid their sabotage in kind, retagging their bags at an airport luggage counter to ensure that their film would take a wayward route to the home office - by way of Rio”.

One of the many events he attended was the Coming-Out party for debutante Jeanette Constable Maxwell, whose father was a friend of the oil billionaire J Paul Getty. The event was also a housewarming party for Getty at home at Sutton Place, Guildford, a Grade I listed Tudor manor house, and in the early hours of 30th June 1960 Getty was captured having the last dance with his English lawyer, Miss Robina Lund. There were many more people there than had been invited, and it was estimated there were between 300 and 400 gate crashers.

Robina takes up the story: “A few minutes later our dance was interrupted by Mr. Getty's butler, Francis E. Bullimore, announcing that one of a pair of valuable antique sugar sifters had been stolen; the police were called. The sifter was left some days later in a London telephone box.

“Over £2,500 (as valued at that time) worth of damage was done” she continues. “Apart from broken glasses, cigarettes were left burning on 16th and 18th century furniture or stubbed out on wooden floors and Persian carpets; the pale blue velvet wall covering in the newly re-decorated library was torn in several places, had cigarette burns and was stained with red wine and ice cream - it had to be completely replaced; electrically-operated gates at the rear entrance to the estate (not intended to be used) were forced open and broken.

“As far as could be calculated, the guests consumed (or covertly took away) some 1,100 bottles of champagne, 175 bottles of whisky, 55 bottles of brandy, 40 bottles of gin and 34 of vodka.

“Although, in theory, they had first attended dinner parties, they managed to consume lobster and 100 pounds of Beluga caviar before breakfast at 2 a.m.’’.

Over 400 requests were made by the press to attend but only 40 tickets were allocated. An office with two telephone lines was provided for the press to phone in their stories, and a line to the USA was kept permanently open for over six hours. The telephone bill for the press office for the one night was in excess of £2,000.

“Getty never personally gave another dance” says Robina, “although he allowed Sutton Place to be used (without charging fees) for charitable events and for private dances given by friends provided the numbers of guests were strictly controlled and comprehensive insurance cover was taken out’’.