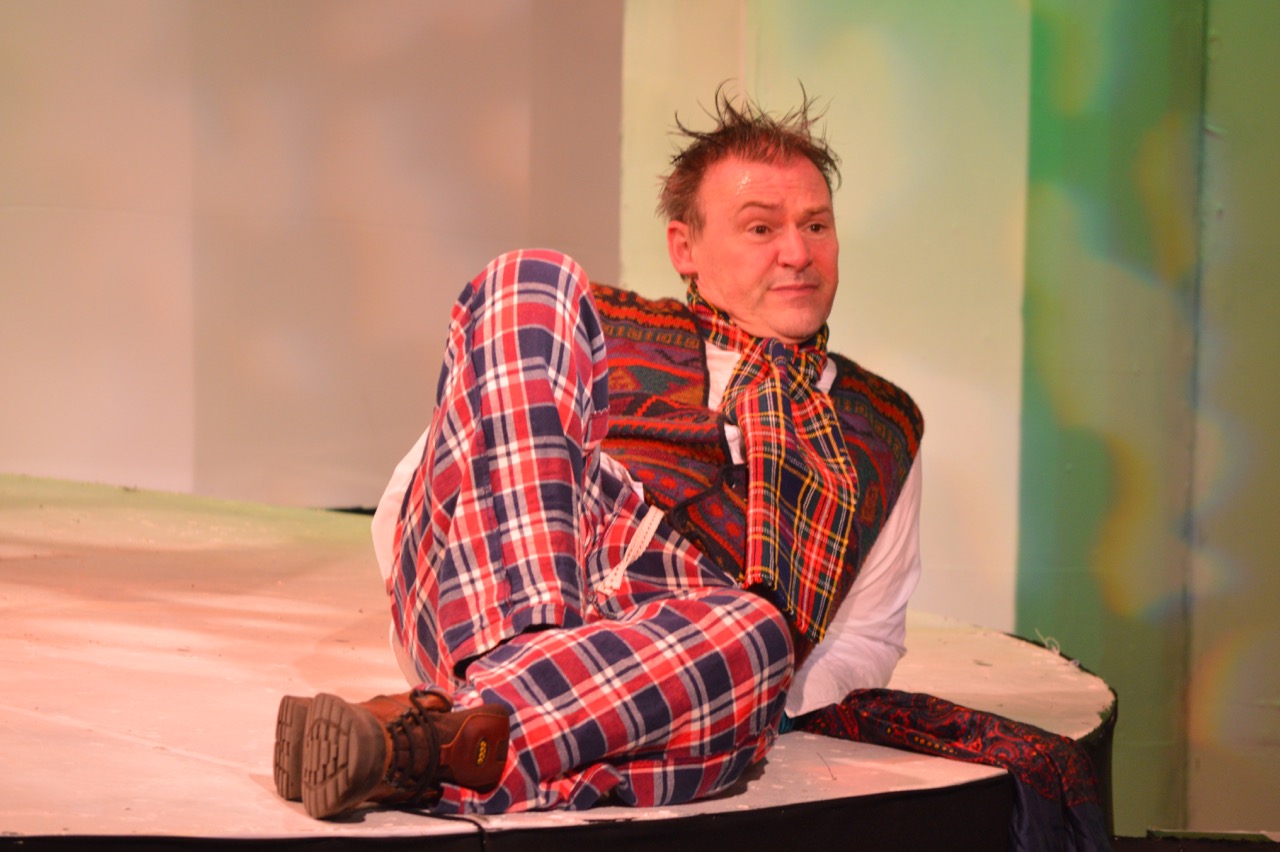 MY STORY The am-dram romance lives on

All arts organisations, particularly theatres, are suffering financially through the Covid-19 lockdown, and amateur dramatic societies are no different.

There are more than 2,500 of them in the UK and many of them, like Northenden Players based in Wythenshawe in Greater Manchester - and member of the Greater Manchester Drama Federation, the biggest amateur drama festival in the country - are more than just an am-dram club to their local communities, and neighbourhood shops are a surprise support source, as Andrew Foulkes, a retired bank official, reveals

When was Northenden Players founded and how did it come about?

Northenden Players Theatre Club was formed in 1942 as something to occupy the local young people after its previous incarnation as Northenden Amateur Dramatic Society ceased activities at the start of the Second World War. Initially called "The Younger Generation” the group performed its first production in March 1942. Founder member Rene Rowlands recalls that there was very little to do and the local sweet shop became the focal point for younger people - the son of the owner, Bert Redfern, kept the shop open until 8 in the evening for youngsters to meet and talk. The idea of forming a drama group began to emerge…

How many members have you got, what do they do?

We currently have about 220 members, though only about 50 acting members. Many of them just want to come and see the plays or help out with other parts of theatre life, such as creating or designing the set, working with sound and light design, costume, props, and there’s our hospitality and welcoming team and a group of people working on publicity and the ever important social media presence. We love to meet together for social occasions too like quiz nights and trips to see other groups perform.

How important is it to have your own venue, and how else does it serve the community?

Our own little theatre has been a dream for the whole life of the club. Always committed to the social life and community of Northenden in South Manchester, our physical location has always been our first consideration, but it’s been an itinerant existence moving from place to place, church rooms, halls, always with the hope that we could get a place to one day call our own. We were evicted from our long-standing location in a building behind a pub when the brewery sold up, and with no notice we were forced to uproot everything - including the stage - and the local Methodist church offered us temporary accommodation.

But we were never really at home there and the local councillor, one of our supporters, suggested we apply to the council for use of the local decommissioned library building under a scheme called Community Asset Transfer. This scheme allows council owned buildings to be handed over to groups to be used for the benefit of the local community without the council incurring any cost – indeed, it often means the council can avoid the upkeep of empty or little-used buildings.

This seemed the ideal - in the location we wanted and a permanent home. But when we began to explore we found the old library had been empty for more than seven years, with a flat roof that leaked when it rained; the building was rotten and with fungus growing on the walls and floor, and it would take vision to convert it.

Thankfully our chairman, Nigel Machin, is an architect and he was able to re-imagine a long low Portacabin-type building into an intimate 60 seat auditorium and stage with a foyer, technician box, green room and storage.

The work began, and £70,000 and six months later we opened for business again run 2019 providing live theatre to local people. As many of our audience and membership are local people, it’s lovely to see the same faces again and again enjoying their night out, but it’s also fantastic to provide an opportunity for people to develop themselves and their skills. Stage skills help in many other parts of life developing confidence and communication, but also learning to “cut your teeth” in the sound or lights department has helped members to move on the do that as a career.

Last year you were a finalist in the Spirit of Manchester Trustee of the Year awards. What is it, and why were you nominated?

The annual awards are presented by Manchester Community Central, an organisation that co-ordinates and supports voluntary organisations throughout Greater Manchester, given for people who have contributed to the sector in different ways. I was nominated by members of the club in the category Trustee of the Year for my contribution to the working of the club particularly over the last twelve months, moving into our new building and refurbishing it. This has been in conjunction with raising our profile by developing connections and new relationships with the local community organisations such as the local neighbourhood forum and the Civic Society, plus the local councillors, shops and businesses - lots of coffee meetings, presentations and explaining what we are wanting to develop with more connections in the community.

How long have you been involved in Northenden Players and which do you think have been outstanding shows?

I began my involvement in the amateur stage in about 1985 after someone I once worked with and had lost contact with called me to see if I would buy a ticket to go and see her in a show. I really enjoyed it and asked if I could join up. I played a part in a musical production of South Pacific and someone asked if I would act with Northenden Players. My first play was Spring and Port Wine by Bill Naughton, a Lancashire comedy.  I’m still involved 68 productions later, and I’ve enjoyed being in all kinds of plays. I loved playing Feste the clown in Twelfth Night (pictured), or Dan the psychopathic murderer in Emlyn Williams’s Night Must Fall, but I think my favourite part was Norman in Round and Round the Garden, Alan Aykourne’s play in the Norman Conquests trilogy. I have also enjoyed directing a number of plays, most recently The Seven Year Itch, the film version of which set Marilyn Monroe on the road to stardom.

How many productions a year are you normally able to mount, and what roughly is the cost of each?

Our season, which runs from September to May each year allows us to present six plays each running for seven nights, with six weeks of rehearsal between plays. In that time we also have to strike the previous set and build a new one. We currently rehearse on two or three times a week, and with one night a week the set building crew certainly has its work cut out. Including the cost of the licence it costs approximately £600 and we try to cover the whole of the cost of staging a play for less than £1000 – challenging, especially if we have to hire expensive costumes or props or furniture.

Do you have to be inventive finding sources of funding – how does the Co-op Community Fund work for you, for instance?

Having responsibility for our own building brings security but it also brings a lot of expenses that need to be covered - fire certificates and all sorts of official regulations in addition to utility bills and insurance. So although each of our plays produces a profit we always need to make sure we can find other sources of funding. The Co-op Community Fund is a great example of this. The Co-op commitment is to supporting organisations doing great things in local communities. As a local charity we can register with the Co-op, and Co-op members all over the country can choose us as their preferred charity so that whenever they shop for Co-op branded goods a contribution is donated to Northenden Players Theatre Club at no extra cost to the shopper. For us last year it meant supporters contributed over £3,400 to the running of the club - vital for us if we need to buy things like new LED lights. We are also planning for developing our use of the building so it can be used by other community groups. Other social occasions also raise funds from the membership and others. We have also received support from the Tesco Bags of Help scheme and One Stop Community Shops plus the Council Neighbourhood Investment Fund.

What has the lockdown meant to you – you were due to play Eddie Carbone in Arthur Miller’s A View from the Bridge - and to the Northenden community?

Well we were in the final weeks of rehearsal for our presentation when lockdown meant we had to postpone the production. As the actors have spent so much time in rehearsal and the set had been constructed and painted we have decided to ask for the licence to be moved to September. For me playing Eddie, being ready to bring him to life, the lockdown has felt a bit like a bereavement. But hopefully there will be a resurrection later in the year.

It's been so strange not to be able to go to the building and get on with things, but our website and social media connections with people are keeping our members and audience in touch. We are having a Zoom committee meeting tomorrow ,and possibly a Zoom rehearsal shortly after that to keep up to date with our lines for the play. Our theatre family are a mixture of people of all ages and regularly means we can care for each other from a distance… it’s safe to say though that everybody is looking forward to getting back in stage!