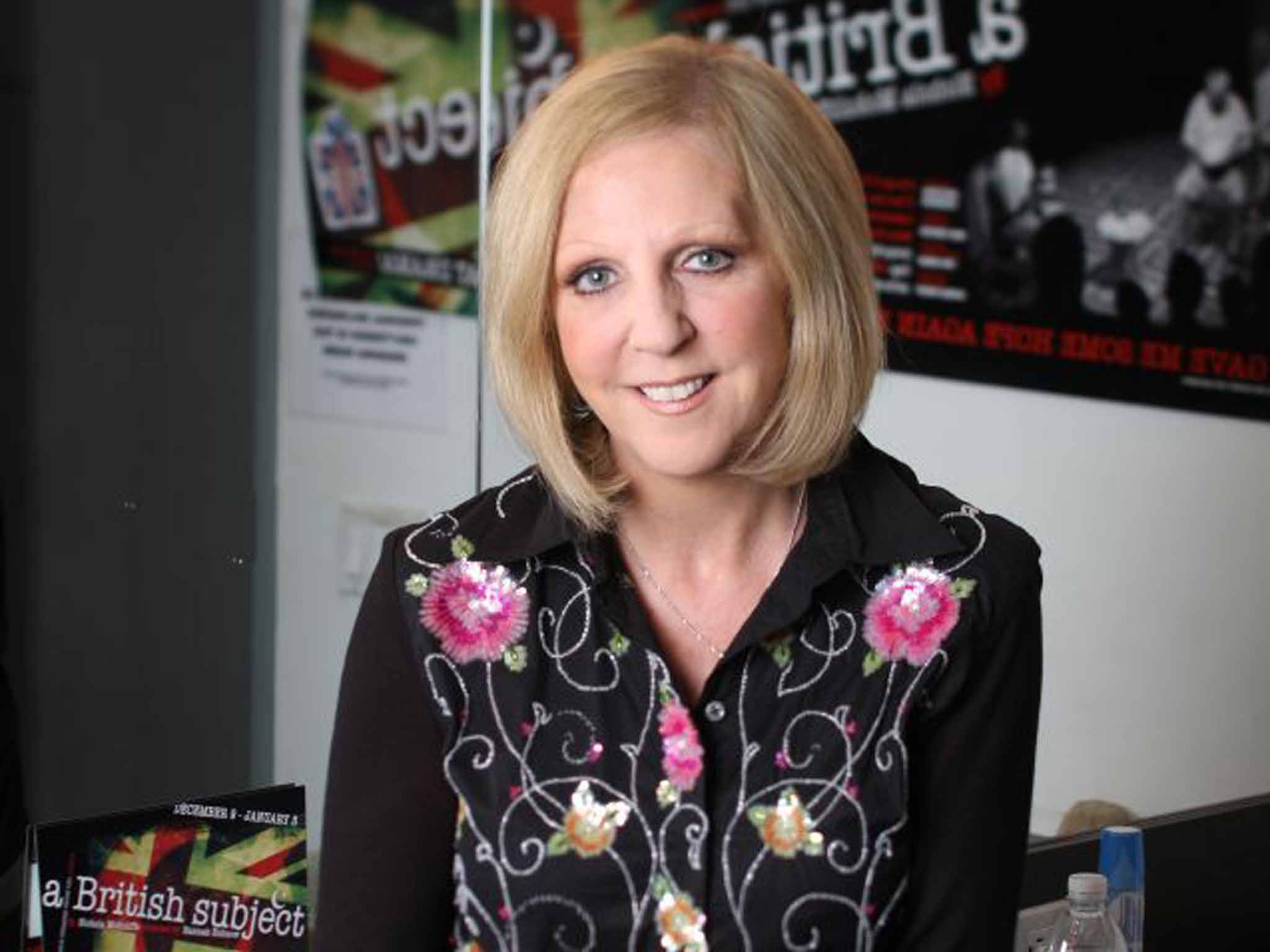 THE WORD Inside Belarus, where the KGB nurture their pot plants and the state theatre joins the demonstrators

EXCLUSIVE  There are many stories about life inside Belarus, many apocryphal, but the writer and actor Nichola McAuliffe has her own experiences of the Janka Kupal theatre and fears for her heroic friends there

When I told people my play Maurice’s Jubilee was on at the Moscow Art Theatre they were impressed: a living female western writer being presented at arguably the most prestigious theatre in the world. When I told them the same play was also in repertoire at The National Theatre of Belarus they looked blank.

The Free Theatre of Belarus? they said. No, the Janka Kupala (pictured below), the government sanctioned, Belarusian language theatre. Few were aware Belarus has its own language and the even fewer who were aware that Belarus was under the rule of the last remaining out and proud dictator in the old Soviet bloc were horrified. It was as if I’d gone elephant hunting with King Juan Carlos. 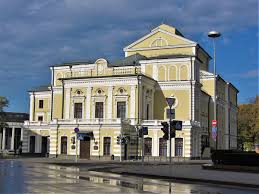 Having gone to Russia to see the Moscow production I wanted to go to Minsk to see this one, and was immediately struck by the contrast in national character in the different interpretations. The play is a humorous study of elderly British who have played with a straight bat and approach death having lost everything to the amorality if the banks. It is set in a modest bungalow in Penge.

In Moscow it became the bleak fatalistic Chekovian tragedy of an old hero; in Minsk the story was of little people, suffused with melancholy sadness, set in a decaying stately home.  In both an acceptance of the inevitability of death anticipated the end - a concept alien to the British psyche and to a play in which the original main character fights with every breath to live. Interestingly, in both Russian and Belarusian productions the only way in which the wife can stave off the inevitability of widowhood is to take refuge in alcohol. The British original drinks only tea. But the characters in the original are not aware of the weight of history, of the oppression, invasions and years of suffering the people – not the individual – have suffered. I became aware that without a knowledge of the national past the characters carry, consciously or unconsciously, we, as actors and directors, can’t properly interpret work outwith our own experience.

Spending a week in Minsk with the company I was struck by the people’s appreciation of order, of their apparent willingness to observe regulations for the good of all. Standing at the side of the completely empty six lane highway which runs from Minsk to Moscow, I suggested we cross the road without waiting for the lights, or descending into one of the ubiquitous underpasses. My anarchic attitude to order was greeted politely but with mild shock and when, in a restaurant, I asked for a salad which was normally served with dumplings it caused the waitress to take the request to the chef. I was (again) politely informed the salad came with dumplings. I said I didn’t want the dumplings, just the salad. I thought she was about to burst into tears. Rather than cause her further distress I had the dumplings and stowed them in my handbag. Later, I was taken to a clean back street, and proudly shown a few cutting-edge cafés which would not have been out of place in the new Millennial packed Peckham. Opposite them was one small wall, sprayed with rather nice graffiti. I say this to show how the people I met in the theatre, the street, the restaurants and the shops seemed as likely to rise up against the status quo as the people of Cheltenham.

To push this population to open rebellion to me demonstrates not just their forbearance but also how far Alexander Lukashenko has pushed a nation who, after a history of violent oppression of their national identity and language, want only peace, respect and their voices heard. They did not strike me as impulsive people, so the damascene conversion of the director of the Janka Kupala Theatre was almost shocking. 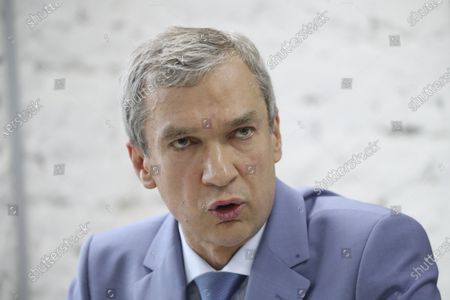 I met Pavel Latushka, the newly arrived administrative director, in an elegant reception room at the theatre. He is handsome, elegant, well-groomed and shod with subtle expense, the epitome of KGB chic. He had been the youngest roving plenipotentiary in Belarus, and despite having been culture minister probably knew as much about the inner workings of a theatre as Dominic Cummings, but at least he was interested. Mr Latushka’s arrival seemed to inspire respect, and slight fear.

I was, for the first time, aware of this theatre company as an organ of The State. So when the demonstrations against Alexander Lukashenko began I wondered where my friends there would stand. I imagined, to keep their jobs, they would have to keep their heads below the parapet, while the Belarus Free Theatre continued to rail against the oppression of dictatorship. I could not have been more wrong.

First, I heard from those within the company that they too wanted only peaceful change. Then, in a decision the bravery of which we in western theatre can only imagine, Pavel Latushka, the dictatorship’s presence on the theatrical earth, publicly came out in support of the demonstrators. A man who could easily wait on the fence, maintaining his safety both financial and personal, spoke out for his company, for his country. And he was promptly fired.

My experience of actors is that often, in times of upheaval in companies, personal security will trump idealism – or even principle – but the Janka Kupala theatre didn’t hesitate. They have all come out in Latushka’s support. They too are demonstrating for peaceful change. Pavel Latushka, pictured above after been sacked last week, no longer has a job but on the phone to me he said the police had invaded the theatre and it was closed down. Imagine the South Bank being flooded with armed riot police and our National Theatre being closed because we demonstrated against the Iraq War.

Mr Latushka asked me to appeal to my colleagues, my theatre community, to support his company’s artists and technicians who have lost their jobs. We too have temporarily lost our world, but the virus which has deprived them of their livelihoods is waving a Kalashnikov in the face of the body politic unaware that he, like all things, will pass.

Finally, being shown round Minsk, we arrived at a modest brick-built building looking rather like a Georgian townhouse, nicely proportioned but in no way showy. It was a Sunday. The doors were closed. All was quiet. My guide said: “This is the KGB headquarters. We still call it the KGB here in Belarus”. I looked. No obvious cameras, no guards, nothing to suggest brutality or fear. I said there didn’t seem to be any security. My guide looked surprised. “We don’t need it” he said. I wasn’t sure that was because no one would dare storm it or because Belarusians are naturally law abiding. I looked up at the innocent windows and saw ordinary glass, no reinforcements or grilles.  In one, on a window ledge, was a pot plant. Not a big pot plant. Just something you’d buy in Homebase. I remember thinking the people here are different, unexpected, with a gentleness easily hurt. I couldn’t imagine young Vladimir Putin saying to his colleagues, 'I’m off next week, will you water my geranium?'”

Let’s hope the Pavel Latushkas and the plant lovers quietly triumph and let us, in the arts community, be there to support them.