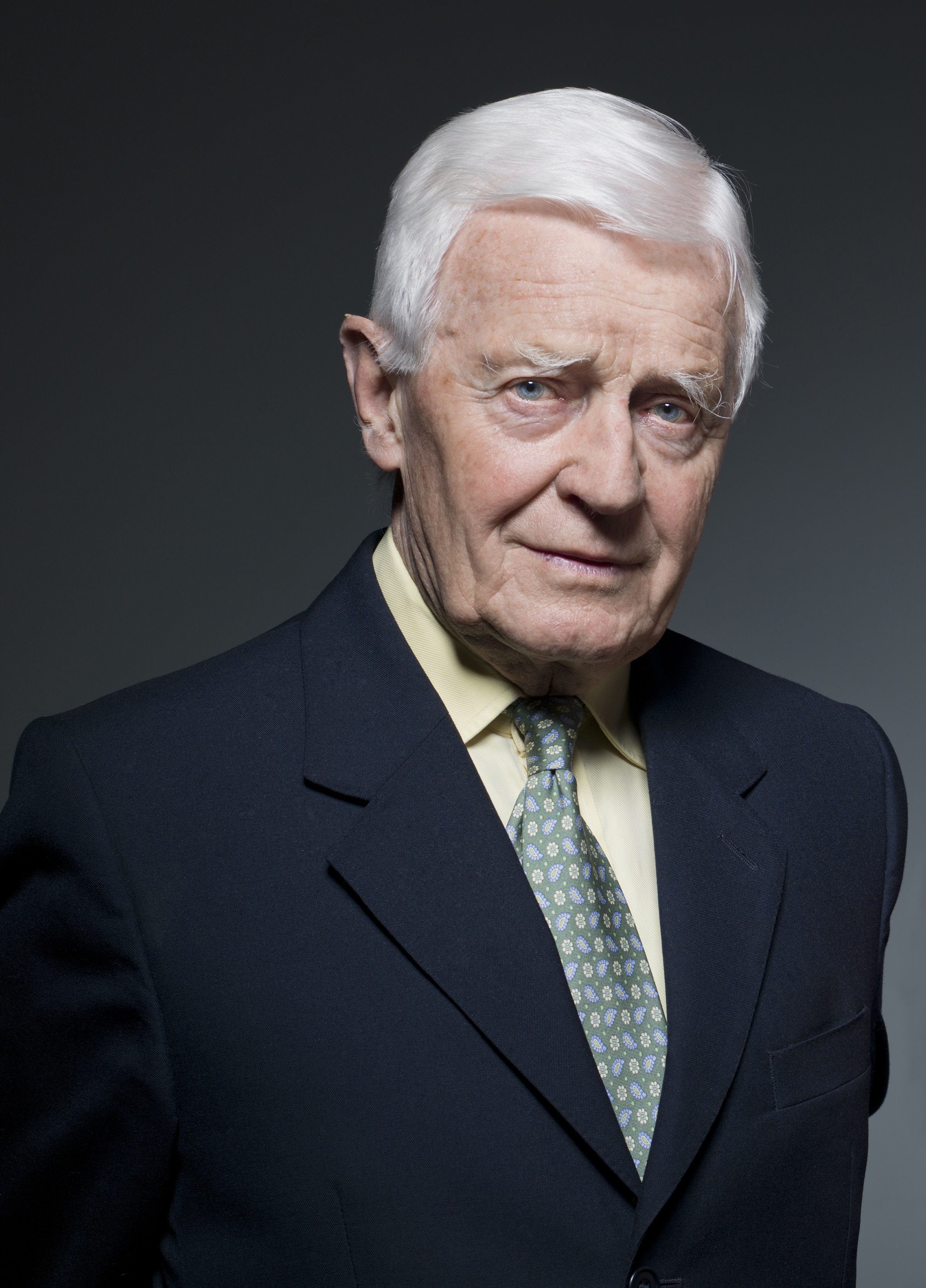 ALAN GRIEVE has run the Jerwood Foundation as an arts and education charity for 30 years, and given away more than £100m. Now, at 93, he contemplates the future for the arts and the Jerwood

In his chairman’s foreword to the Jerwood Foundation’s 2019 annual report, Alan Grieve was poignantly percipient. “At this juncture of continuing global, human, economic and political uncertainties and instability, it is impossible to predict what lies ahead as it may affect Jerwood” he wrote. “However, we believe that one way forward for us is to strengthen our existing relationships and partnerships, to be open to opportunities and to maintain an entrepreneurial spirit of enquiry and action.”

He didn’t know that within a year the Jerwood itself, grown in 30 years under his guidance to be one of the great arts philanthropic foundations, would downsize, making its small staff redundant, selling its West London headquarters and decamping to the Shropshire countryside.

But what he and the Jerwood have not done is to downsize its support for the arts. Since 1991 Jerwood has given away £106m and continues its policy of making grants worth £1.5m a year, with Jerwood Arts operating at the now-reopened Jerwood Space near London Bridge.

“We should remain true to the ethos of the foundation bearing the name of John Jerwood MC” the rest of that paragraph reads. “Above all else to be certain and unwavering in enhancing our private philanthropy and our place as effective philanthropists in the arts”. Now 93, Grieve, a lawyer by training, wasn’t expecting to have to steer the foundation through the worst national crisis since the second world war.

Grieve was 30 when the senior partner of his Gray’s Inn law firm, Taylor & Humbert (now Taylor Wessing), asked him to look after a client who was awkwardly based in Tokyo. This was John Jerwood, a war hero who had gone into business after the war and amassed a fortune trading in pearls, and as his business lawyer Grieve travelled the world for him, becoming his friend and confidant. In the mid-70s he was given power of attorney to create a charitable foundation, the chief interest of which initially was Jerwood’s old school, Oakham, to which he gave close to £8m. “He had no children but he had money and he liked education and the arts” Grieve said. “He did what he wanted to do.”

When Jerwood died in 1991 Grieve took control of an organisation with huge assets but no order. It took him two years just to find out their extent, and he acquired and invested shrewdly enough to treble the assets. Eight years later he established the Jerwood Charitable Foundation and Jerwood Arts - giving individual support to artists - distinct and at arm’s length from the Jerwood Foundation, with a separate chairman in Tim Eyles, and endowed it with £25m.

He has been bold and some ventures have not come off, such as the sculpture park he had three goes at creating with partnerships that didn’t work. There have also been successful partnerships, especially with other cultural charities like Weston and Leverhulme. There were important interventions, with the foundation’s biggest grant at the time going to rescue the Royal Court Theatre, and the Jerwood name has become almost ubiquitous in cultural buildings – from the Jerwood Library at Trinity Hall, Cambridge, to Jerwood Vanburgh Theatre at RADA to the Jerwood Hall at LSO St Lukes.

Between 1998 and 2012 he diversified the Jerwood’s support with a series of capital projects, such as Jerwood Space, the prime rehearsal space for West End shows. His CBE came in 2003.

He operates in a system of “private enterprise for the public benefit”, based on sound investment (the Jerwood has two fund managers, one in London and the other in Hong Kong), and he is the only person so far to have given back a national lottery grant – he hates bureaucracy and grants come with unconscionable red tape, he believes. He thinks business-minded philanthropy will be key to the survival of the arts post-Covid, and the Jerwood's most recent action has been to create the Blue Skies Fund, £1m for freelance artists - “not just the violinist but the bloke that fixes the lighting” – to be dispensed (on the advice of Nicholas Serota, the Arts Council chair) between Sam Mendes’s Theatre Artists Fund and the Help Musicians Fund.

Perhaps the greatest adventure was the creation of the Jerwood Gallery in Hastings. Grieve had gradually created the foundation’s own collection of British modern art – including Brangwen, Bomberg, Sickert, Augustus John, Stanley Spencer, Winifred Nicholson, Lowry, Terry Frost and Maggie Hambling - bought usually on his own volition but never for more than £100,000, so that he values the collection at somewhere north of £7m having cost about £1.5m. His art historian daughter Lara Wardle is its curator.

He wanted somewhere to show it and commissioned his son Tom and his HAT Projects - Grieve is an unabashed proponent of “enlightened nepotism” - to build a modest (costing £4m) gallery near to the Hastings waterfront Stade. The Jerwood Gallery opened in 2012 with its own board of trustees, and there was a falling out: the management he put in place was not enamoured by his modern collection preferring contemporary art, and there was a parting of the ways. Jerwood remains the owner and landlord, but since early 2019 the venue has been Hastings Contemporary, paying Jerwood a market rent.

The Jerwood Foundation is now based in Grieve’s former home in Shropshire. He says it was a pragmatic decision to close the Notting Hill office rather than a cost-saving measure, and he has promoted Lara Wardle to be its executive director with an advisory board. The collection, incidentally, is about to open for a year’s residence at the Harley Gallery at Welbeck, Notts, and Wardle has started looking for a subsequent permanent new home for it.

Grieve has seen arts funding bend in the economic winds that blow from different directions, with the cutting of subsidy to the growth of philanthropy to the end of business sponsorship. Some, maybe many, will be critical of his modus of avoiding committees and superfluous paperwork, but without his decision-making hegemony many important projects would not be operating today. He believes that subsidy and philanthropy can work together, but that government’s purpose should be kick-start ideas and hand it over to the well-run arts charities to develop. The Weston Jerwood Creative Bursaries, supporting arts professionals from low socio-economic backgrounds, originated with Margaret Hodge when she was arts minister but wanted it out of the ministry machinery where it would get clogged up, and so passed it on to Jerwood and Weston.

As he contemplates handing over the arts charity that he created in another man’s name, Alan Grieve sees a difficult but successful future for a cultural sector which has been caught up in globalisation, he says, and the spreading of money and those that have it to spare. This won’t necessarily mean less money for the arts but it might mean changes to how art galleries are presented, to smaller theatres and plays, to a revival for chamber music, to careers ending or changing. And he sees problems ahead for charitable trusts and foundations: there are too many small ones not working efficiently, and attempts at putting them together have always failed.

“You’ve got to be nimble, got to be fleet-footed, got to be on top of your funding. The wind blows in a certain direction and you have to be able to respond. That’s why independence is important - and good fund management is essential.

“However big your assets you need a small organisation, you don’t need meetings, discussion papers and impact reports – if someone said to me they wanted to do an impact report and it would cost £10,000 I’d give the money to a regional touring theatre instead.

“The Jerwood will be smaller, more strategic, and we don’t want to jump at making decisions when nobody knows what the world’s going to look like, but the Jerwood will remain.”