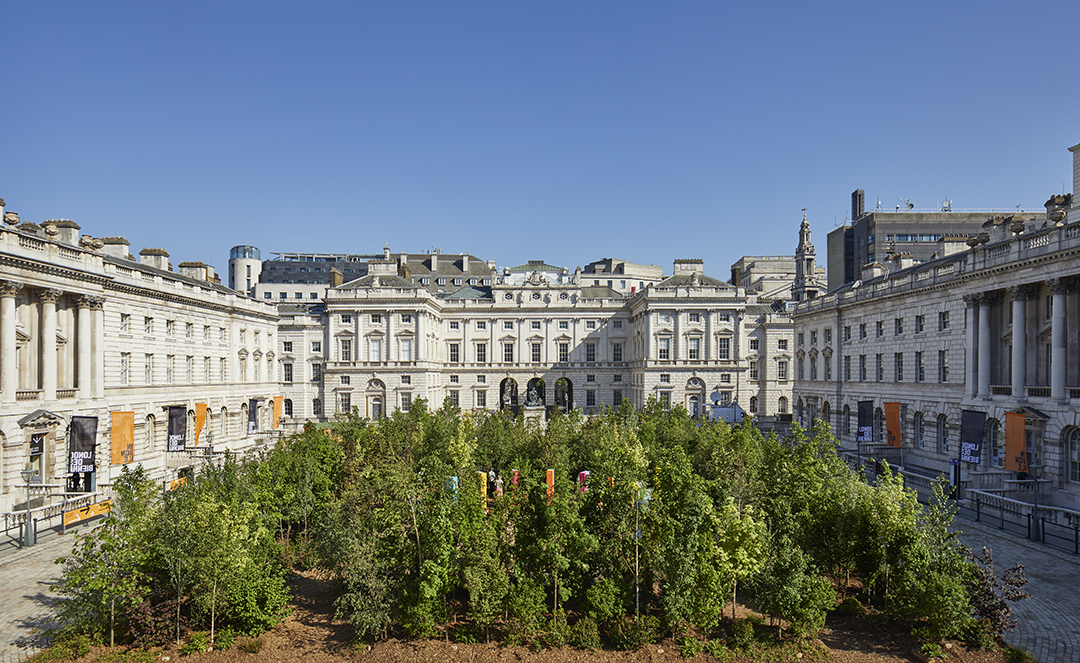 Can we design our way out of climate disaster?

It’s appropriate that the first post-pandemic major arts event should be the third iteration of the London Design Biennale says Ben Evans, who founded it with Sir John Sorrell. “Climate change is a design issue” he explains briefly.

So can designers solve the environment crisis? The biennale, which opened today at Somerset House under the artistic direction of the artist and stage designer Es Devlin, doesn’t just suggest they can, it shouts it from the first manifestation in the courtyard – once a civil servants’ car park – where she has planted a 400-tree forest.

Almost exactly two years ago Devlin and Sorrell had a tour of Somerset House as the potential venue with its CEO, Jonathan Reekie. “He told us ‘There's only one thing you can't do here and that is plant trees'” Devlin says, “i't's been written into the architectural covenant of the building based on the Palladian Enlightenment principles of the triumph of human design over nature, so whatever you do just don't put any living trees in this courtyard’.

“So as a kind of reaction, I guess, I said what we will do is make a forest, but of course over the past two years everything changed and I think our attitude to living beings that aren't human has changed and I think our attitude to trees has changed”. And the point is, whatever the Enlightenment tenets were man doesn’t have the last word over nature.

The Forest of Change, created in association with film-maker Richard Curtis’s Project Everyone which is devoted to promoting the UN’s global climate change goals, is a melange of 23 species of trees from the UK and northern Europe, with birdsong recorded by Brian Eno from around the world heard among them, and at its centre is a clearing in which those global goals - improving environmental education, awareness-raising and human and institutional determination to mitigate climate change, adaptation, impact reduction and early warning – are enlarged upon, resonating in the woodland.

It gives the theme to the 33 pavilions dotted around inside Somerset House, all following, and interpreting, the clarion call of “resonance”. The corners of the world Devlin has invited to be represented are not conventional signatories of UN resolutions.

The almost population-less Antarctica, for instance, takes a room which the artist Ben Cullen Williams has encompassed with a film made while he was part of expeditions recording over many years the slow disintegration over the Larson B ice shelf, with a haunting background created by the musician Gaika (who is based in Somerset House). 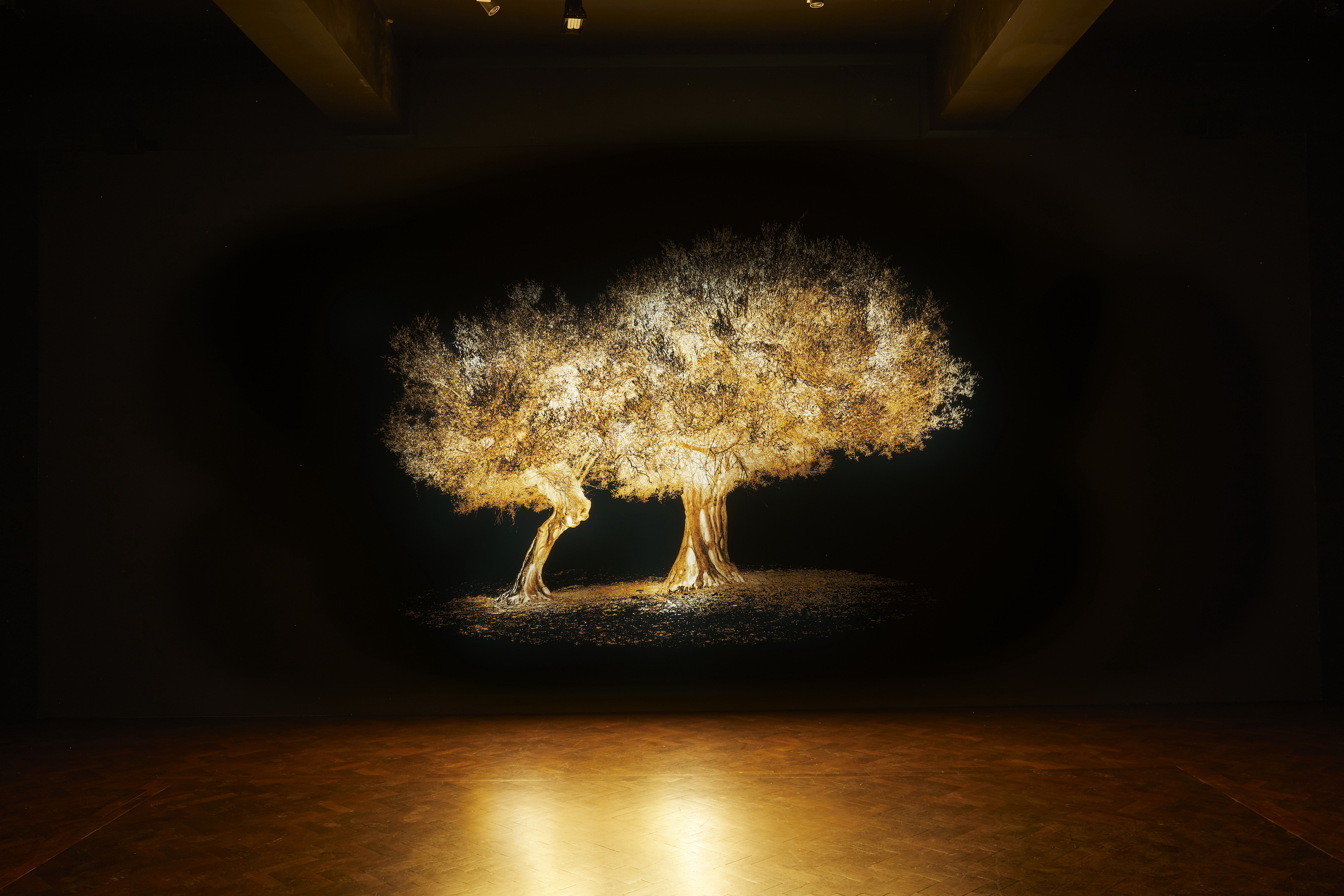 Prince Nikolaos, a member of the Greek royal family and a photographer, has created a magical golden olive tree as a an ageless being on his native islands (olive trees live for hundreds of years) that sees all of man’s climate follies and abides them all (above).

Guatemala, in the artist Maria Adela Diaz’s pavilion Nostalgia, is nostalgic for its loss of natural water and with composer Joaquin Orellana she has put together a series of rain sticks – large bamboos with stones sealed in them, which rotate on a spindle make the sound of rain falling.

New York City’s Studio Elsewhere wasn’t able to be a physical part of the biennale, but it has contributed a video installation, Recharge Rooms, an immersive space that combines music, scent, lighting, and sound to ease trauma, anxiety, and stress.

But one of the most enigmatic and enchanting of the pavilions is Taiwan’s Swingphony, created by the design agency Bito and organised by the Taiwan Design Research Institute. In the spirit of the biennale theme of resonance, in the centre of the space three metronomes on desks tick, almost like hands in prayer, while the golden glows from a hundred or more paper lantern balls in turn grow and wane. On one wall a video image very like a kaleidescope shifts and melds in light and colour as the metronomes click away the moments. It is a domestic metaphor for Taiwan and its harmonies in a country that is home to a wide range of religions and sects that live comfortably together in prayer and meditation, and which used the word “together” to get it through the pandemic – there have been only 166 deaths from Covid. It illustrates, says Taiwan’s ambassador Kelly Wu-Chiao Hsieh, “how a synchronised rhythm inspires belief in a more harmonious world”.

But the pavilion closest to the heart of Sir John Sorrell, a kind of archbishop of campaigning designers, is the one devised by Chatham House after a global call to 50 countries, and put together by the studio Pentagram as Design in An Age of Crisis. This gets down to the nitty-gritty of designing better lives for us: how the “Children Crossing” sign was devised, how Bazalgette redesigned London's sewerage to banish cholera, how Frederick Law Olmsted persuaded the 19th century that parks were good for us, and the Night Loo, a personal urinal for female refugees in camps where to go to the public toilets at night risks rape and worse.

There should have been 50 countries represented here and the fact that there are as many as 33 is a minor miracle Sorrell says. The biennale should have happened in September, but as the months drew on it was looking increasingly like they would have to miss Devlin’s vision of the mended future. In January, when the second spike was at its sharpest, it was decided, with government sanction, to plan for June.

The theme was always going to be climate change, but as 2020 moved into 2021 the visions of all the pavilions and artists became more intense, more urgent, as, Sorrell says public anxieties shifted from Covid to sustainability.

And the reason why a design festival should be the vehicle for this message of resonating action against pollution is not a real question, says Sorrell. “Designers are trained to solve problems, that's what you do in your life, and you’re either solving a problem to do with your employers or solving a problem for a client.

“So designers have an instinctive approach to issues and when they see a big issue their first thought is ‘well, how do you design your way out of that? How do you design the solution?’ We designers are the problem solvers, and this is the biggest problem of all.”

Or as the woman Sorrell calls a genius, Es Devlin, puts it: “We are used to this word designer just meaning good - designer handbag, designer hotel, designer haircut - but actually design is involved in everything. We designed sewers, we design weapons, we design tax systems, we design carbon budgets, and I think what designers realise is we all work to parameters.

“Every designer working here at the biennale has had to work at shifting parameters.”

The London Design Biennale is at Somerset House, London from June 1 to June 27.