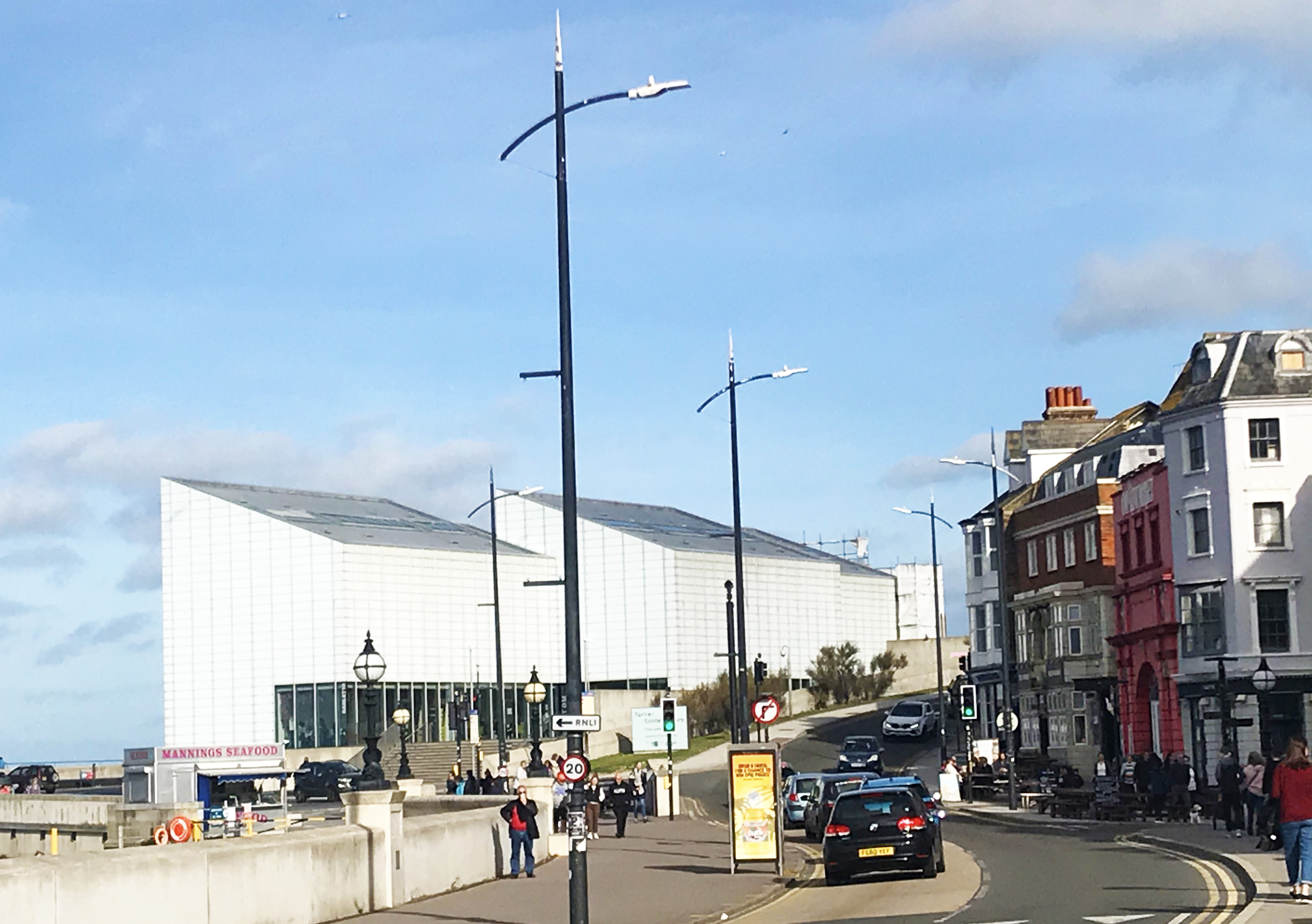 Destination Margate, art’s new mecca, thanks to its gallery

Ten years ago Margate was the forgotten seaside resort. Its shops were boarded up, its arcades closed, its inhabitants complaining about the influx of supposedly illegal immigrants. Then they built an art gallery on the seafront. Simon Tait finds out what happened next

“The first responsibility of Turner Contemporary is to regenerate society, give the community a place” its architect, Sir David Chipperfield, told AI in 2011 just before it opened. “I think if that happens it will strengthen the community, and I think it will have influence beyond that. I’m sure it will bring people from London and beyond, but first of all you’ve got to make it locally popular”.

But it was controversial. The art world condemned Kent County Council’s project as misconceived, a view that seemed confirmed in 2007 when costs for the first scheme - to build a gallery on pilings beyond the shore – soared beyond £50m. Director Victoria Pomery feared the project she had been nurturing since 2002 was dead in the water, but the council decided instead to simply start again, and hired Chipperfield.

For all the grossness that threatened to engulf it ten years ago, Margate has a special charm that has beguiled artists through the ages, not just Turner who painted more than 100 pictures here. Dante Gabriel Rosetti is buried here, Walter Sickert taught here, T S Eliot wrote part of The Wasteland overlooking Margate’s famously sandy beach.

Pomery and Chipperfield turned out to be a dream team, both convinced that local consultation was essential, and the regular colloquiums they had with Margateans subtly altered the plans - significantly, one was to change the orientation, from looking out to sea to opening onto the town. It was to be a gallery without its own collection, aiming at supporting local artists and appealing to a local audience, but with an eye to the truth that London is only an hour and twenty minutes away by train. Still, there were criticisms that Turner Contemporary didn’t support local artists well enough, was elitist in its approach or was too mainstream and not adventurous enough. 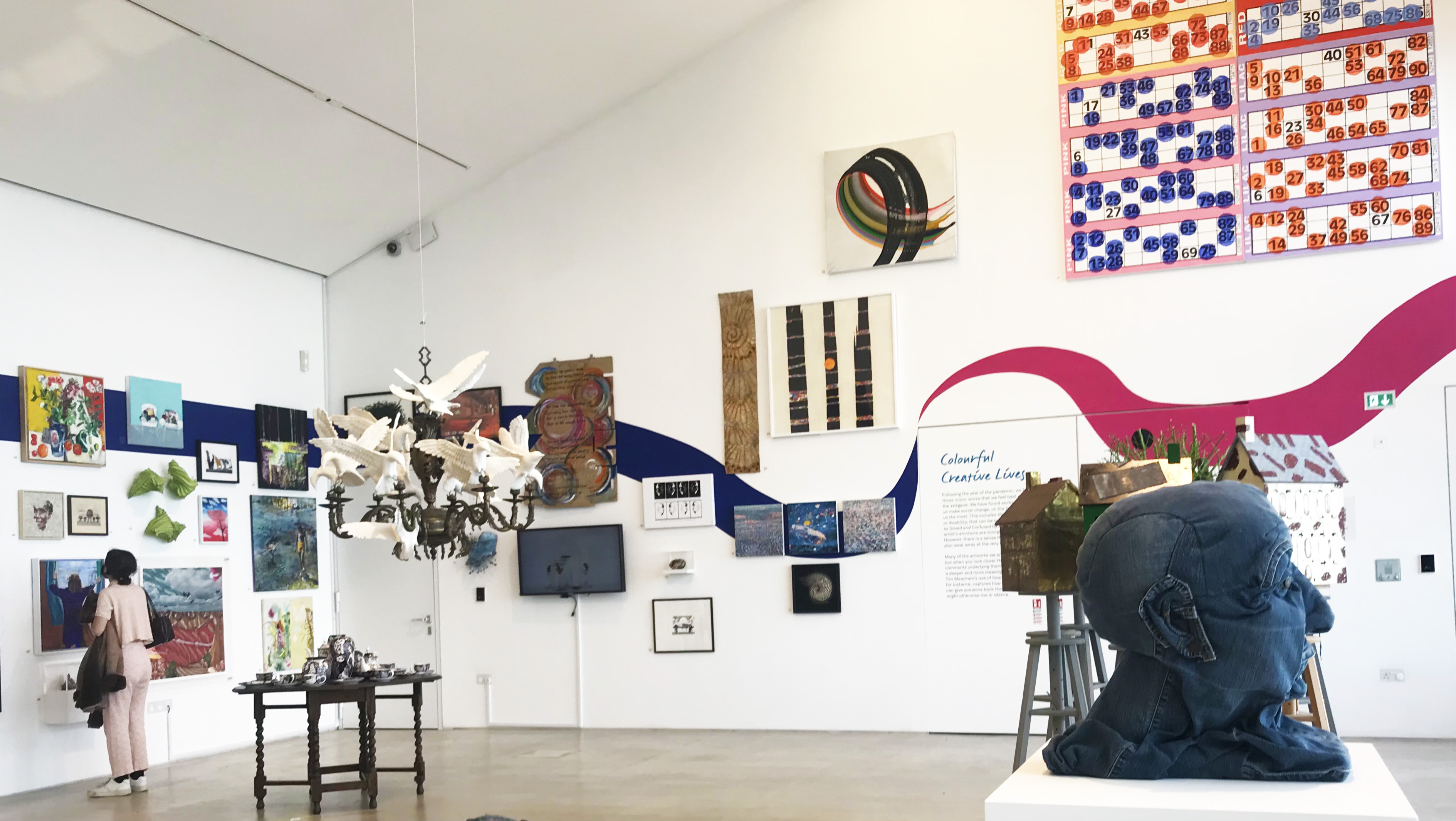 It’s hard to see a justification for those knocks now. The first major exhibition to open - not in the gallery but in a nearby former Marks & Spencer’s - was the Turner Contemporary Open, Kentish artists’ work largely curated by Pomery and the Sarah Martin, the head of exhibitions. Its tenth birthday has been marked by the second Turner Contemporary (above), again masterminded by Pomery and Martin but curated by four local organisations, Margate Pride, Canvas 4 Equality (a visual art platform designed to raise awareness about inequality), Age UK and the Turner Contemporary Access Group, set up to maximise the gallery’s diversity. Professional and amateur artists were welcomed in the call-out, there were 4,000 submissions and the four groups selected 450 paintings, sculptures, photographs, installations and craftworks for a show that takes up the whole of Turner Contemporary’s exhibition space and was turned around in a remarkable eight months.

Turner Contemporary has had its nationally acclaimed triumphs – the Seaside exhibition, Tracey Emin, Grayson Perry - but this one, says its senior curator Fiona Parry, has been one of the most ambitious. “We’ve always been audience focussed” she says “and that has increased and developed, so that this show used those four groups’ wealth of experience and expertise, letting local peole have a voice in the curatorial process”.

There have been subtle changes to Turner Contemporary mostly to do with the fact that expected maximum annual visitor numbers were 125,000 and in the year before lockdown were 400,000, so that more toilets have had to be installed, the shop has been reconfigured, the cafeteria enlarged.

Despite the Covid downturn, Parry says, Margate’s small shops in the town haven’t closed, they’re opening, and the large high street chains that have blank windows have largely decamped to the nearby Westwood Cross Shopping Centre leaving Margate to its antique emporia, vintage clothes shops and the new rash of gourmet restaurants.

One of the more intriguing pieces in the show is Bring Up The Boat by Sara Trillo whose studio is just off the High Street in Limbo, a collective of studios set in a former brewery. 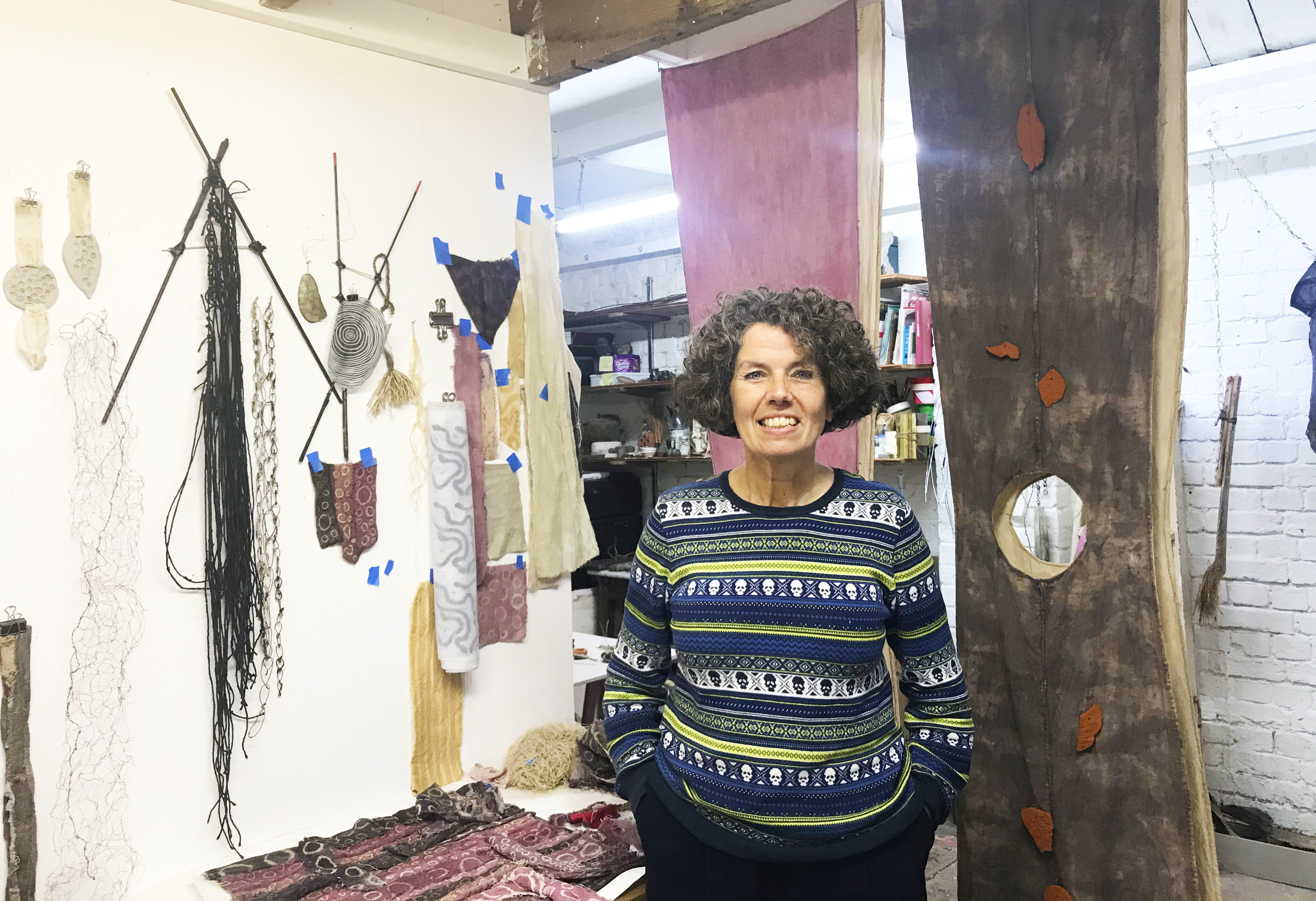 Trillo (above) has known Margate all her life. Her family connections with it go back centuries, she was brought up here but until 2016 was working from her home in Sandwich, nine miles away. She was drawn back to the town by its new ecology, she says.

She is fascinated by local history and myth, and Bring Up The Boat was a project about St Ymar, a 9th century monk who may have given his name to Margate and whose body was allegedly brought to the beach from Reculver. Trillo created the ribs of the boat from reeds from the local river Stour and buried them in the sand for locals to excavate six months later, which they did with great care a reverence as if they’d found the Sutton Hoo burial ship. “The whole thing was quite exciting” she says.

“What difference has Turner Contemporary made? Well, we have inquiries for studios almost every day” she says. She was teaching at Canterbury and brought students to see the light that so beguiled Turner; she found a community of artists that hadn’t been here before, supportive, creative, settled. “You could sniff the energy” she says. “Turner Contemporary has changed the place absolutely with projects involving the community, recruiting people and blending into the community”. If there is a downside, she says, it’s in the proliferating air B&Bs and the rising price of property tending to exclude local people and favouring those decamping from London, a bit of gentrification.

No-one knows how many artists are living and working in and around Margate now, but an estimate of hundreds, she thinks, is conservative. Thousands would be more accurate. There are suppliers here for them now, engravers and printers such as the comprehensive operation on the first floor of the Carl Freedman Gallery, next door to Tracey Emin’s growing studio empire in what is being called the art quarter around Union Crescent. 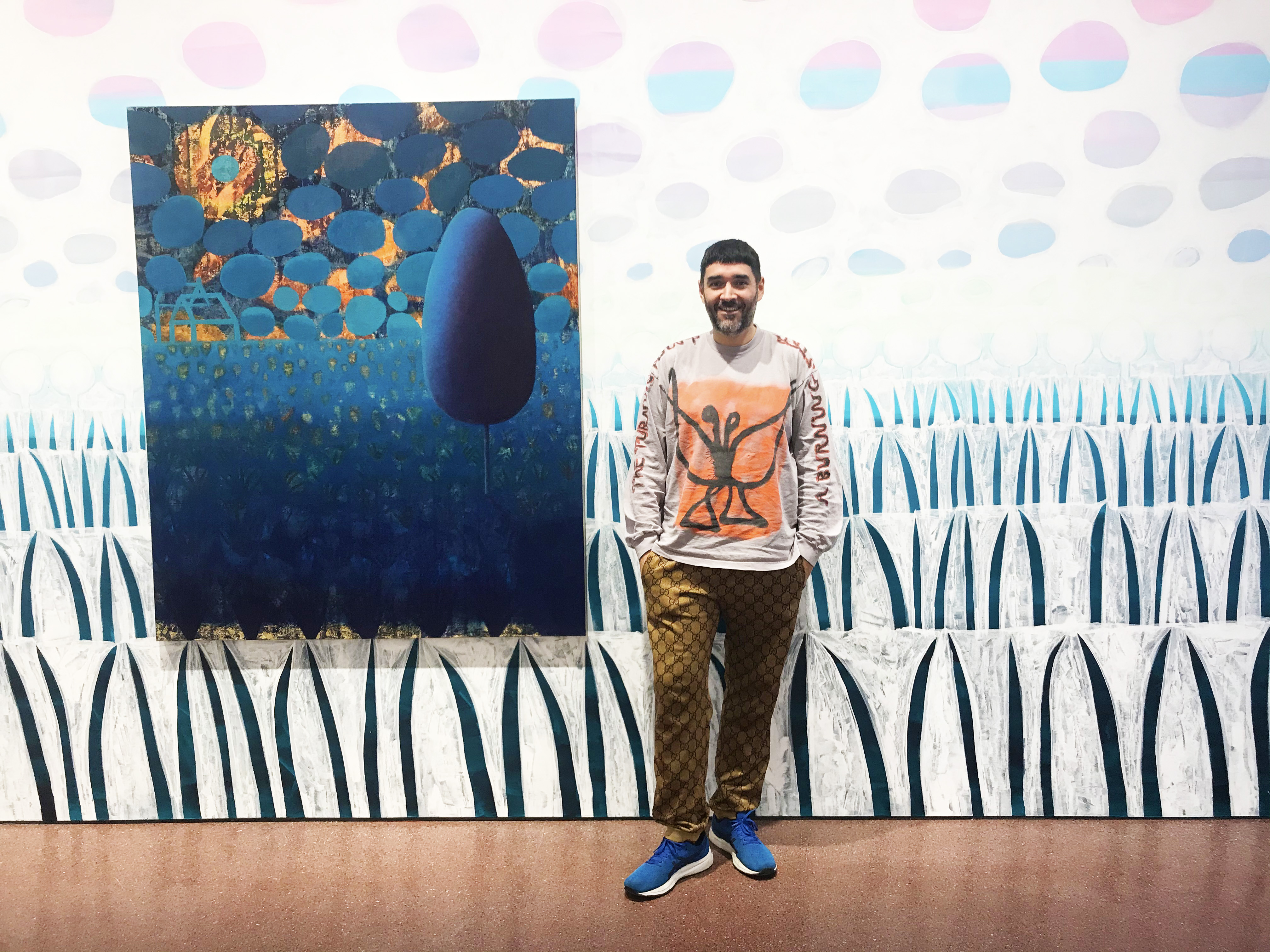 The Carl Freedman Gallery is among those decamped from London, whose manager is Robert Diament (above). The gallery was in Shoreditch, he says, but moved here in 2019 “changing the cycle of what we were doing in London – we don’t need to be near collectors and we’re getting far more visitors here” he says, because Margate has become a destination. Private views in London were getting 100 guests and another 100 for the whole of the exhibition period, while in Margate in a larger space (on the site of a newspaper printing plant) Freedman attracts 1,000 at an opening and maybe 7,000 in an exhibition’s run.

They are not only visual artists that have come in the last six or seven years, Diament says, but a huge community of creative thinkers from photographers to fashion stylists, “a bedrock of a community that will stay”. He has now sold his flat in Hampstead to buy a house here.

“There’s no way this was going to happen without Turner Contemporary” Diament says. “What Victoria has done for this town is extraordinary, especially with the backlash she had to fight against early on.”

Victoria Pomery left this year to take charge of Plymouth’s new arts centre, The Box, and she will be replaced in January by Clarrie Wallis, coming from Tate where she is the senior curator of British art. Her brief is to expand Turner Contemporary’s international profile bringing more celebrity artists while not compromising its local role.

“What that museum has done is to bring so many more people, people that would never have come otherwise” says Diament.  “Art can change hearts and minds, and Margate has changed my life for ever..”