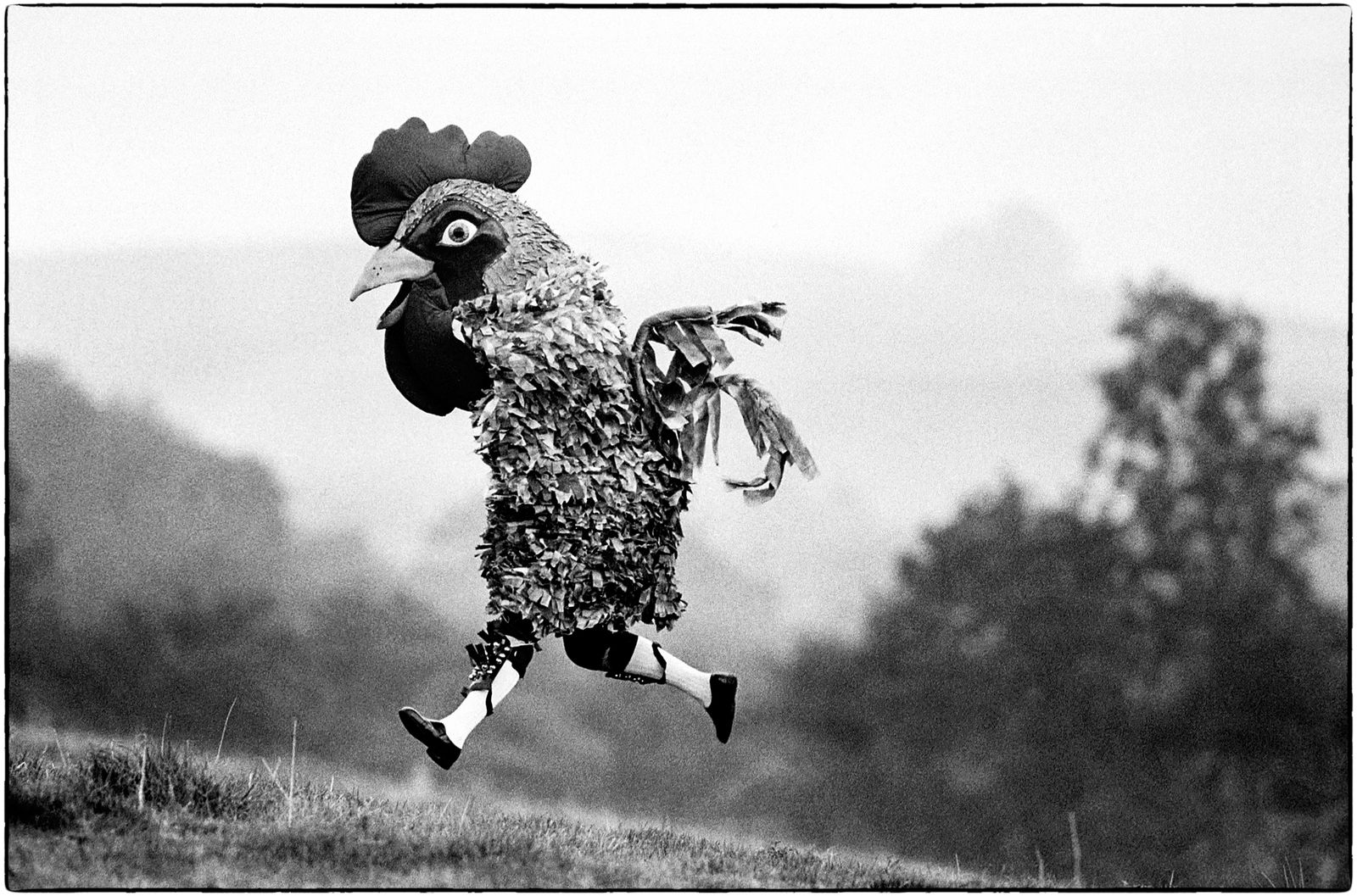 John Robertson is a creative and imaginative photographer whose work has appeared in the pages of the Daily Telegraph, The Guardian and many other papers,  and a considerable commercial portfolio in both still and video photography. He has been given many awards during his 40 years in the industry, but takes most pride in twice being voted UK Regional Press Photographer of the Year. His images have a humour about them that brings light relief to the pages of the heavyweight press.

One of Robertson’s many assignments was this picture of a leaping cockerel. He had put an idea to The Guardian about an event at a local gallery in Peterborough and as part of the publicity the gallery had arranged for a morris dancer to be dressed in his cockerel outfit.

“I’ve always liked to think outside of the box and on this occasion that box was the gallery, piled up with paintings and sculptures” Robertson says. “If you put forward the assignment yourself, then as a freelance you have to be darned sure that it works visually.

“So I drove off to a nearby field with the morris dancer and persuaded him to leap about for me, which he did. All the boring pics from the gallery were junked and the leaping cockerel photo ran at nearly half a page in the old broadsheet Guardian.'

The cockerel picture later appeared in the TV programme Have I Got News for You, and even Perrier wanted it for an advert but the photographer, thinking only of the news angle, failed to get the leaping cockerel to sign a model release form. So the lucrative Perrier offer had to be turned down.
“The morris dancer threatened to sue me when he came across my photo of him in a diner in the USA and assumed I’d been making a large pile of cash without cutting him in on the deal.
“To this day it remains my favourite photo, but also one of my most stolen images - sadly, people wrongly believe if it’s black and white then it must be ‘vintage’ and therefore ‘copyright free’”

Robertson became interested in photography at the age of seven, experimenting with the family Box Brownie. Eventually his parents bought him a black and white Polaroid camera.
Coached by his chemistry teacher, who had a Pentax Spotmatic SLR and ran the school camera club, young Robertson saved up the money from his two paper-rounds to buy a Russian Zenit SLR, the poor man’s equivalent of the teacher’s Pentax. On trips with the school rambling club across Wales’s Black Mountains he would take photos of the other members of the rambling club, then sell them prints earning money to buy more kit .
Fate took a hand one day when the church hall in the Warwickshire village where he lived caught fire, flames licking the walls and the roof crashing to the ground as he passed by. He ran home for his camera and returned to take photos. Developing the film at home he was urged by his grandmother to take the results to the local paper; the 15-year-old lacked confidence, but Grannie took charge and one of his images made the front page with a by-line.

An early decision to follow in his uncle’s footsteps and join the Royal Air Force was abandoned. “That was it” he recalls. “I was hooked by the lure of the media and forgot all about the RAF”.
On leaving school he worked for a succession of local newspapers and then in the 1980s, after winning awards from Fuji and Ilford and the UK Regional Press Photographer of the Year for the second time, the time was right to try his hand at working for the nationals.

Robertson had already been freelancing in his spare time until he was eventually hauled in front of the editor who objected to him freelancing for the nationals: he didn’t want any more “arty shots in his newspaper”, adding “faces sell papers”, his answer to declining circulation. For Robertson it was leave or face a future of line-ups and group shots.
“Freelancing was a bit of a shock to the system, but I loved it” he says. “On my first day at work I was photographing Ted Heath conducting an orchestra in London which made me late for my own leaving celebration at the pub. Chasing the clock became a theme.

“These days I still take photos for The Guardian and Daily Telegraph as well as commercial and PR work for companies like Waitrose, Siemens, Loakes, Facebook and many others, plus video production for companies and charities. I’ve discovered I enjoy writing too, and have written for various blogs, including the photo equipment company ‘Manfrotto’.

“But to this day the leaping cockerel remains my favourite picture.”