Biggin Hill Airfield, one of the main stations flor the Battle of Britain in 1940, is having its  timeless story told in a museum that opens today.

The Biggin Hill Memorial Museum opens at the airfield near Bromley in Kent, from which 454 fighter pilots flew to confront the  Nazi air invasion, and never returned. The became immortalised as “The Few”.

During the battle, from July to October, Biggin Hill was part of a chain of airfields across South-East England protecting London and described by Winston Churchill as “the stongest link”.

The new £5.3m museum, the result of a 16-month construction, has more than 80nobekjcts, many of them donated by the public, including an escape crowbar to enable pilots to  save themselves from doomed  aircraft, a clock from the German Messerschmitt  fighter, and personal items such as wallets, ID cards, cigarette cases and photographs. 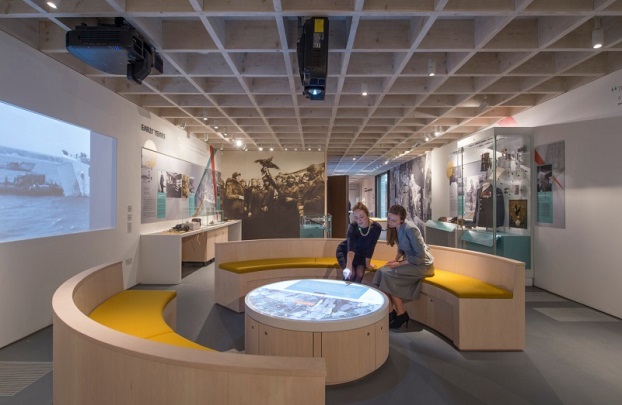 The museum has been made possible by a Heritage Lottery Fund grant of £2m , backed up by grants from central government and Bromley Borough Council.

The museum includes the Grade II-listed and now restored St George’s RAF Chapel of Remembrance built in 1951 on the orders of Churchill to commemorate the pilots lost in the battle, with a wooden floor made from propeller blades, and 12 stained glass windows by Hugh Easton now restored.

The museum’s patron is Sir Winston Churchill’s great grandson, Randolph Churchill. “The name Biggin Hill,like the name Winston Churchill, has become synonymous with Britain’s defiance of Hitler and Nazism. This is highly appropriate as the history of the man and the airfield were always closely entwined

“My great grandfather helped establish the Royal Air Force in the aftermath of that first global conflict and watched as Biggin Hill developed from his nearby home in Chartwell. This was an airfield he knew, and which helped inspire his oratory about the role of ‘The Few’.”