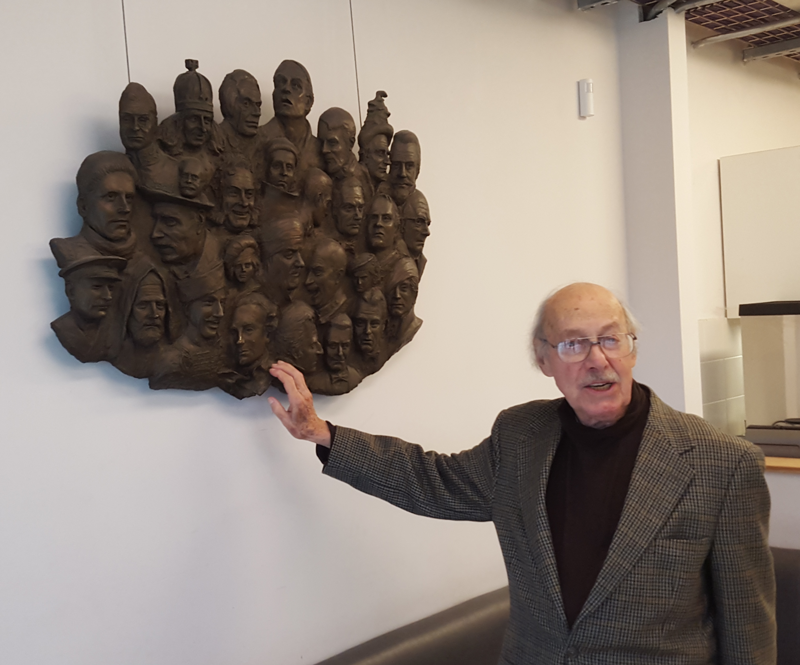 Chichester Theatre told ‘Give my sculpture back’

Artist, 90, says Olivier gift should be on public show

The sculptor Lawrence Holofcener is to demand the return of the sculpture of Laurence Olivier if Chichester Festival Theatre does not return it to the foyer where Lord Olivier unveiled it in 1985.

The bronze bas relief of Olivier in 24 different roles, was consigned to the theatre green room, the actors’ recreation space which is out of the public gaze, in 2014 after a refurbishment. The artist called in to see it yesterday and found it had been moved.

Chichester Festival Theatre’s theatre manager Janet Bakose said the decision had been made to clear the foyer of all decoration to leave it bare and minimalist.

“I am very angry” said Holfcener, who celebrated his 90th birthday recently by unveiling a new sculpture of Shakespeare at Stratford-upon-Avon. “This piece was a gift to the theatre in honour of Olivier, paid for by subscriptions from actors such as George C Scott, and it was agreed that it would go on a pillar near the entrance where I thought it still was.

“I am angry not so much for myself as for Olivier, the most frighteningly gifted actor and director, yet there is no acknowledgement of him now at the theatre he ran. The public should be able to see it”. Olivier was the first artistic director of the Chichester Festival Theatre from 1961 to 1965, before taking on the National Theatre.

The artist is best known here for his much-loved bronze of Franklin D Roosevelt and Winston Churchill sitting together on a bench, which has become a tourist attraction to its spot in London’s Bond Street.

Holofcener and his wife Julia were visiting from their Florida home to oversee the gift of the only other cast of the sculpture to the Rose Theatre, the first Bankside playhouse saved from the bulldozers in1989 by a campaign by the theatre community led by Olivier from his death bed, whose last public speech was a rallying cry, “Cry God for Harry, England and the Rose!” He died a month later on 29 July 1989.