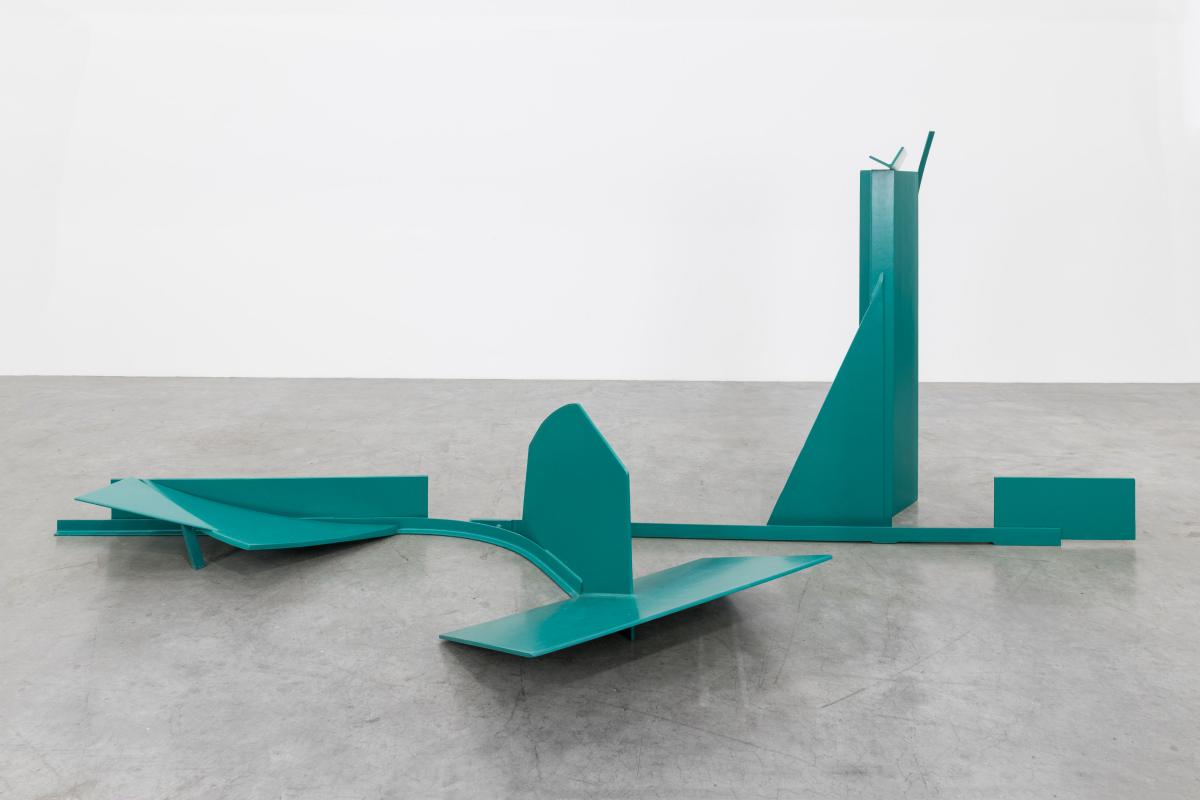 The problem with being the most influential British sculptor, as Sir Anthony Caro has so vigorously and insistently been described following a career spanning seven decades, is that everyone wants a piece if you.

Caro’s works are scattered far and wide, the jewels in many private and public art collections. The iconic Early One Morning stands in the centre of Tate Britain’s 1960s room as a sort of totemic proof of Caro’s paradigm-shifting impact: a singular token of an artistic train of thought agreed to have changed the direction of modern art.

At a distance there is indeed a temptation to think of Caro as an epochal pivot point, emerging with his ground-breaking work in the 1960s, around which the world of art and sculpture swung in the start of the second half of the 20thcentury. Annely Juda's Seven Decades exhibition is a rare opportunity to chart the course of Caro's conceptual thinking over a period of vast cultural change, and realise that he actually plotted not a single point, but a deft and direct straight line.

In 1953, when Warrior was being cast in bronze, 'How Much Is That Doggy In The Window' topped the UK singles charts twice, sung by two different people. When the perspex and steel of The Eye Knows were being conjoined in 2013, Miley Cyrus was making two appearances in that same UK chart with two different songs.

Caro's work covers a huge expanse of world change, but in his earliest and his latest works a preoccupation with space and the perspectival interaction of the spectator is clear, the conceptual heartbeat of his output

In Warrior (1951/53), Cigarette Smoker (Lighting A Cigarette) (1957), and Bull (1954) the artist's insistence on the viewer moving is already apparent. The defining elements of the smoker’s face and hands appear and vanish depending on the spectator. The space between hand and head is vital, not just to the sculpture's form but to the onlooker's engagement.

In London (1966), Andy (1966) and Larry's Land( 1970) this thought is realised still more strikingly as the forms and intersections of Caro's work began to separate and rely on the negative space between them.

In the latter half of the 70s the function of negative space in Caro's work grows, with aspects of the works rising and falling in prominence as the relationship between work and viewer shifts. There's a renewed freneticism in Emma Screen (1977/78), while the angular intersecting shapes of Table Piece CCLXXX (1975/76) makes the encircled negative space all the starker when looked at straight on.

In the 80s figurative elements, apparently relegated to the fringes of Caro's thinking in the decades since the 50s, reveal themselves as having been present all along. The abstracted four-legged form for Table Piece Z-98 (1982/83) harks back to the lowered shoulders of Bull (1954). Barcelona View (1987) sketches an economic figurative outline that can be traced back to Cigarette Smoker.

The huge bulk of Caro's work in the 90s and 2000s serves to underscore a cardinal thought in Caro's philosophy of sculpture: that the plinth-less pieces stand as objects alongside the spectator, rather than works existing in designated space which the onlooker must gaze in upon.

Caro is often thought of as first being important as a sculptor reacting to the restrictive norms of the practice, the progeny of Henry Moore and David Smith, and then as a teacher inciting a generation of sculptor's including Gilbert and George and Barry Flanagan to react to his own thinking. But as Caro remarked in a 2012 interview, 18 months before his death, “I've always said, 'what's next?', not 'what's just happened?'.” To think of Caro as a static point in the history of sculpture (as the Tate's 1960s room encourages), responding to what went before and instructing what came after, is to ignore the irresistible zest that drove his own work forward.

Looking back along the long avenue of Caro's work, what is most striking is its dynamism. At every stage there is an artist fascinated by the crumpling brutality of form and determined to oblige spectators to share a space with it. New ideas about material, presentation and maintenance somersault over each other as his work moves ever forward.

How quickly the immediacy and vitality of Caro's thought was appreciated is evident in the fact that his first retrospective took place in 1967. But the hugeness of his ideas is apparent in the more than four decades of progress he made with them beyond that point.