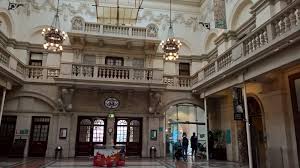 Our major museums are in a crisis, falling apart because of a lack of government investment, according to the National Museums Directors Council.

In a letter to The Times today the chairman of the council, the Science Museum’s Sir Ian Blatchford, with co-signatories Art Fund director Stephen Deuchar and Museums’ Association chair Maggie Appleton, says after a decade of “swingeing cuts in local and central government funding” museums and galleries across the country are “at breaking point”.

The letter says that national, regional and local museums have “delayed essential maintenance, patched or repaired infrastructure and rattled the tin for donations to fill the gap” andare now facing catastrophe.

“In towns and cities there is a quiet crisis” they write. “Leaking roofs and antiquated air-handling systems threaten the stability and conservation of collections”.

The plea comes at a time when visitors numbers are reaching record levels, and tourism research shows foreign enthusiasts are come for our heritage more than any other attractions.

“All political parties recognise the crisis, but it is time to deliver on their promises of help”.

Blatchford told The Times that £200m was needed for regional museums alone.

This summer sewage flooded into Bristol City Museum (pictured), causing tens of millions of pounds worth of damage.