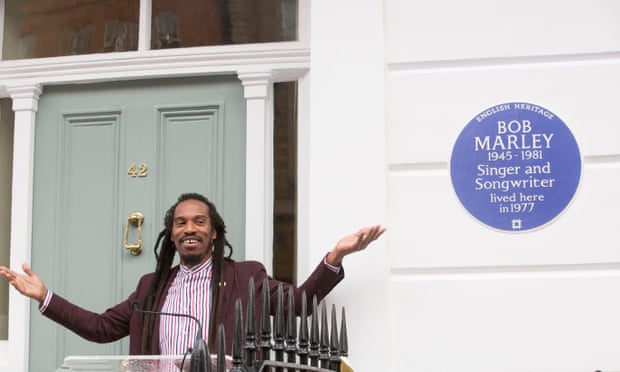 The memorial plaque has been placed on the house in Oakley Street, Chelsea, where Marley stayed in 1977 while finishing his album Exodus.

“It’s very difficult to say what Bob Marley would have said about this plaque, but he did once say, ‘Live for yourself, you will live in vain, live for others, and you will live again’ “ said the poet Benjamin Zephaniah who as a teenager had been encouraged by Marley, and who is pictured here outside the house. “So I’m quite sure he would say that this is for his people and his music.”

The historian and blue plaques panel member David Olusoga added thatMarley was the first superstar to emerge from the developing world. “More than a brilliant musician, he became a cultural icon who blazed a trail for other black artists.

“It’s wonderful to – finally – be able honour him with a blue plaque here on Oakley Street today, after all the time and determination that went into proving that this was indeed Bob’s house. Thanks to new testimonies there is no longer any doubt.”