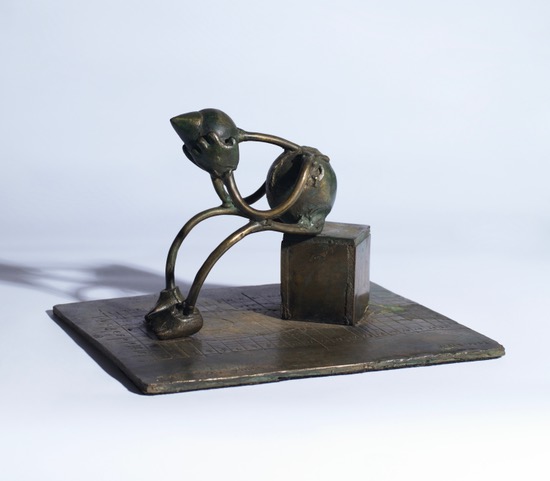 Art dealer and curator Philip A Bruno is to mark his 90thbirthday by giving over 70 works of contemporary and modern art to the Hunterian Gallery in Glasgow.

The collection, half of which will go on show in a exhibition opening on October 18 and half next year, features American artists including  William Dole, Lee Gatch, Red Grooms, David Levine, Leroy Lamis, Robert Andrew Parker and Tom Otterness, as well as international figures such as the Mexican painter José Luis Cuevas and the Japanese sculptor Masayuki Nagare.

Above: Philip A Brown with his first Paris exhibition in 1950

Main image shows the maquette for Crying Giant, by Tom Otterness, made in response to 9/11

Born in Paris Phillip Bruno studied art history at Columbia University, New York, and early in his career knew Matisse, Brancusi and Giacometti in Paris. He spent most of his career as co-director of the Staempfli Gallery and later Marlborough Gallery in New York, both important venues for contemporary art. He is married to the Scottish art critic Clare Henry.

“Phillip A. Bruno played a pivotal role in the New York art world for 60 years 1950-2010, working with some of the most important artists, collectors and museum directors of the period” said the Homerian’s director, Steph Scholten. “The collection provides a snapshot of the American scene in the crucial post-war period, and it brings us many fine works of art, including sculptures, paintings and drawings, which we could not normally have hoped to acquire.

A Gift to Glasgow from New York: The Phillip A. Bruno Collection is at The Hunterian Art Gallery, Glasgow, from Oct 18 to Jan 12. Admission free.