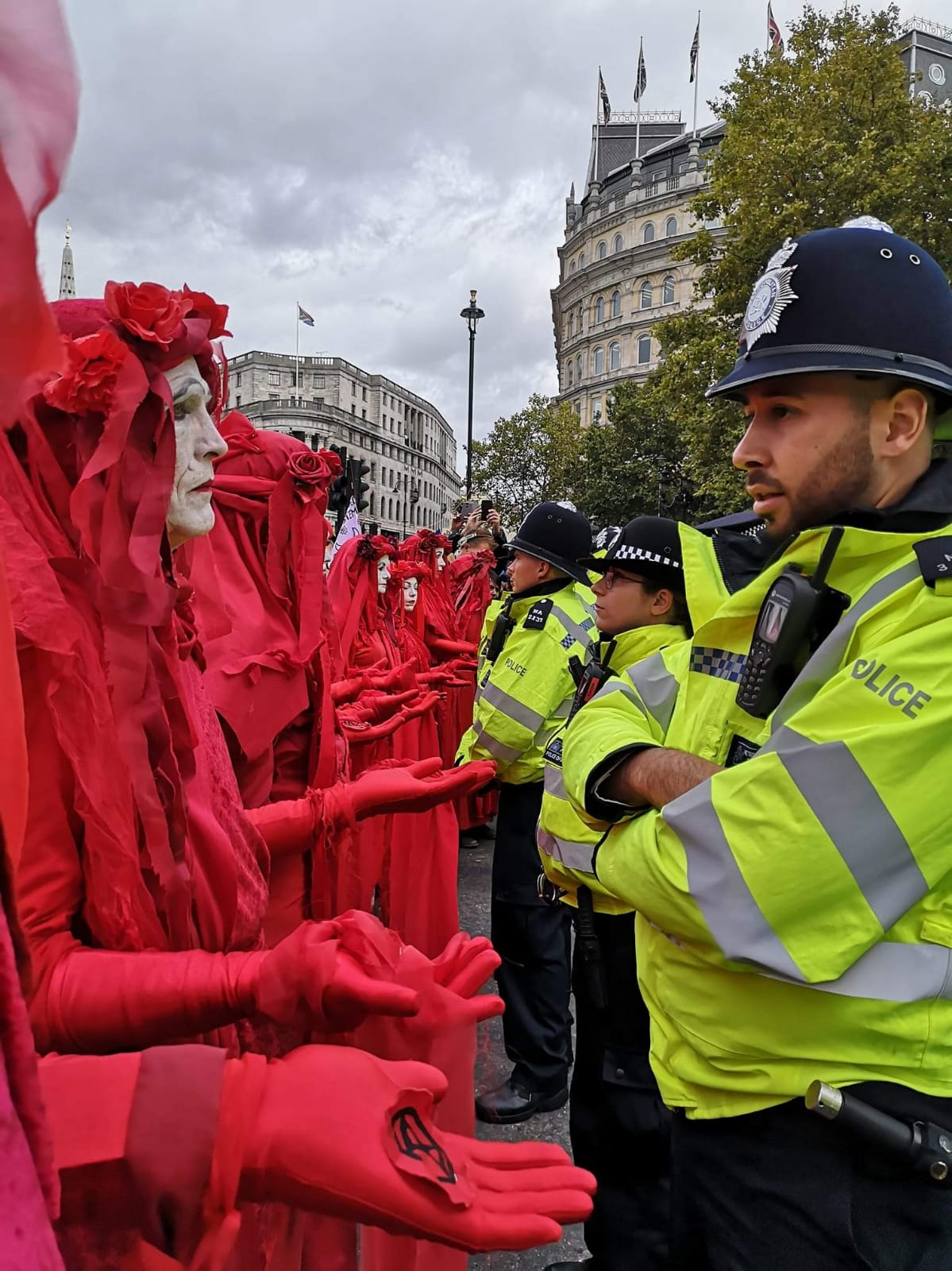 There’s a startling symmetry about Martin Jenkinson’s image of the Orgreave confrontation during the Miners’ Strike in 1984 – our Picture of the Month last year – and last week’s picture of red-clad Druids in a more peaceful coming together from the Extinction Rebellion demonstration last week. The first face-off didn’t work, the miners lost: the second one might, and the difference is art. 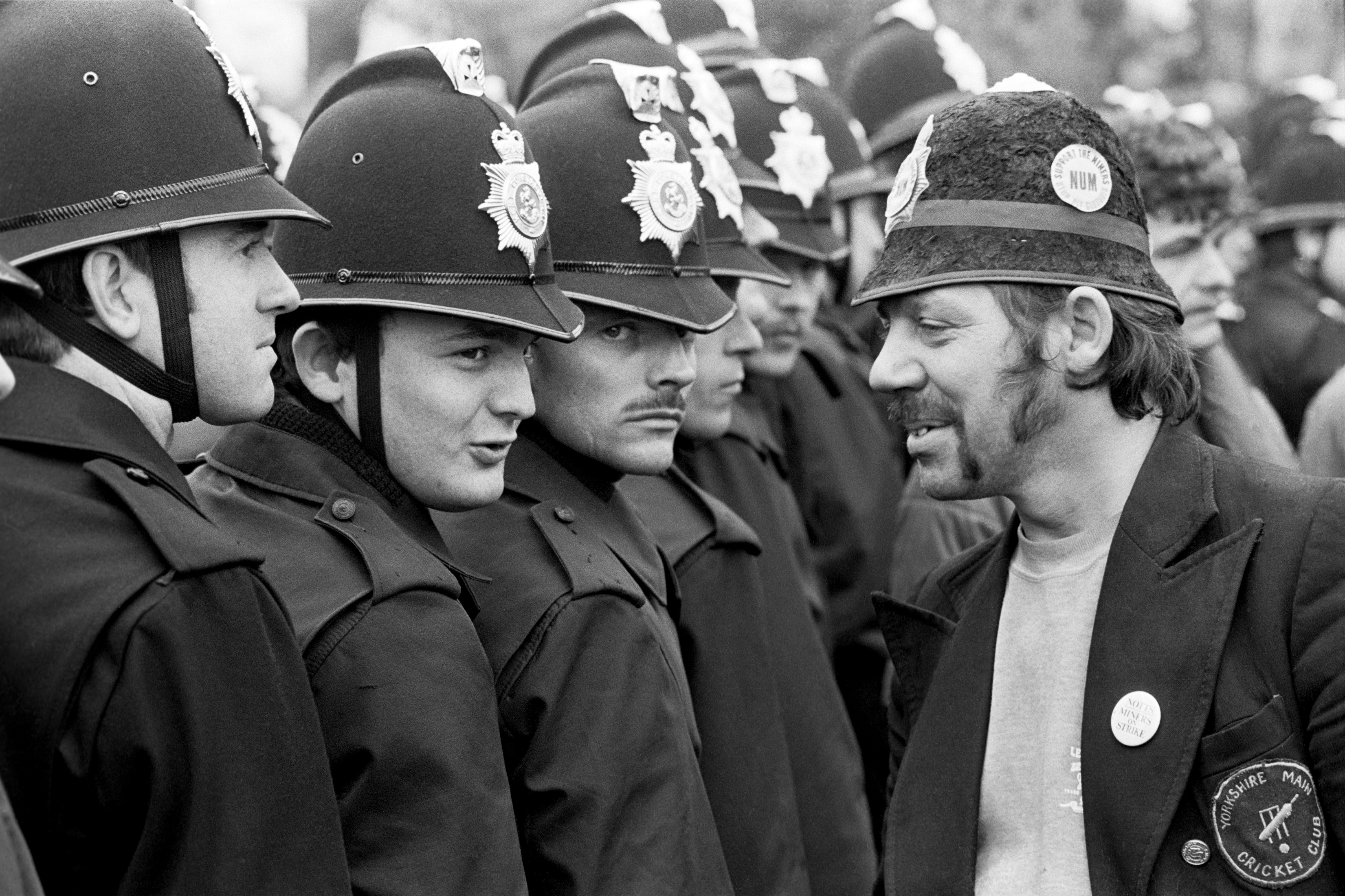 Throughout the two weeks of high news profile activity by the coalition of environmental activists brought together as Extinction Rebellion, there was artistic activity – street theatre, music, clowning, poetry, dance, you name it. None of it made the media for some reason, but it will as this bandwagon moves on, gathering speed. There’ll be podcasts, Instagram outputs and no-end of Facebook presences for a long time to come.

It has been an organic kind of programme, different groups or individuals getting together or contributing separately. It’s all rather guerrilla says one of the artists involved, Lorenzo Belenguer. There's an arts team that coordinates things, but all artists are invited to join in “and in a magic way everybody finds their place for artistic expression. You could compare it with an ant colony in which everybody participates in the best of their ability without role imposition. However, all the participants need to adhere to the principles and values of Extinction Rebellion like non-violence, non-vandalising, always respectful to oneself and everybody, climate crisis awareness, etc” he says. So the business of climbing on the top of a Tube train didn’t go down well with the rebels.

Performances are important during protests, he says, because they can de-escalate tension and give the message. A chance of getting through the clamour. Like these druids: “They produce beauty and calm the audience. It's a very especial spectacle to watch”.

And it doesn’t stop with the October events. King’s Place, the King’s Cross arts venue in London, has just unveiled its Nature Unwrapped season, starting in January, in which music, words and natural sounds will be blended, not overtly as part of ER but definitely gently transmitting the warnings from the Intergovernmental Panel on Climate Change.

The pianist, composer and experimentalist Sarah Kingdom Nicolls will give a recital as part of the season, incorporating the spoken word, including that of the Swedish campaigner Greta Thunberg. Nicolls was also part of the Extinction Rebellion. “I definitely see my recital as very much related to the creative side of the ongoing ‘rebellion’, in that it is bringing the message but in a very different way, in a neutral space, with time for reflection and learning”.

We’ll come back to this. 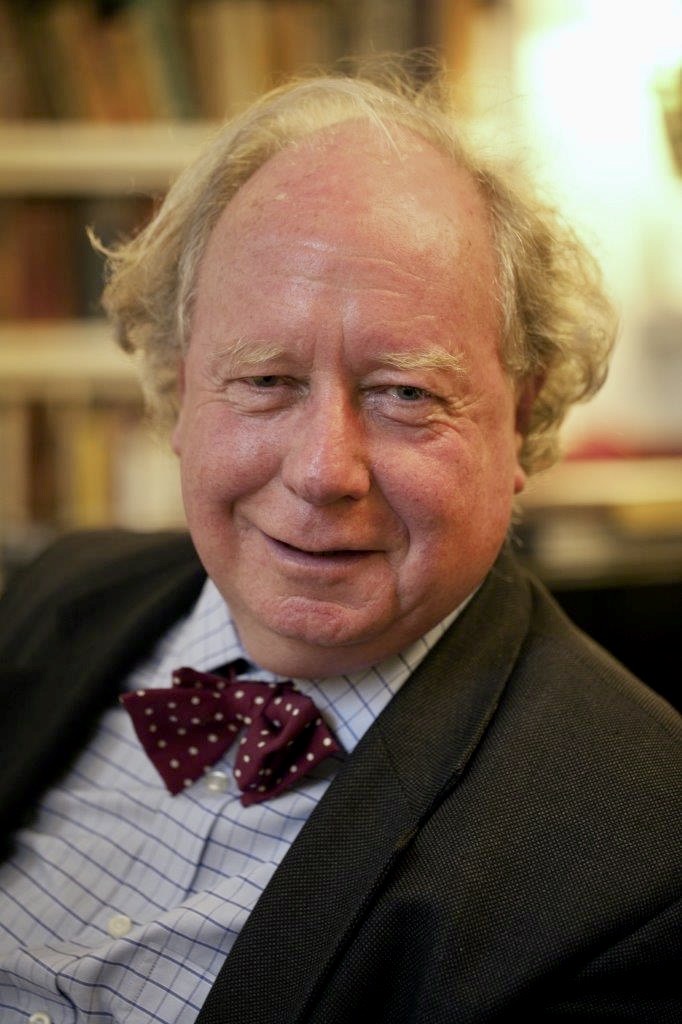 Meanwhile, today Professor Gavin Henderson has announced he’s stepping down at Royal Central School of Speech and Drama at the end of this academic year. He had a torrid time last year when he was personally accused of ignoring BAME applicants by a militant group claiming to represent students, and his resignation was demanded. The board backed him, an inquiry was launched and he and Central were exonerated. And all that was happening at one of the most curial times for the school’s development, the building and opening of its £17m extension, which happened at the start of this year. Having done that, he says, and approaching 72, it seems a good time to go.

Gavin has been a doughty campaigner, and his previous job was as principal of Trinity College of Music which he moved from Marylebone to the old Royal Naval College at Greenwich, and merged it with Laban Dance. He left when his board wouldn’t sanction another merger, and he moved on to Central.

He is a devoted Brightonian, and he will be able to devote more time to saving the fabulous Hippodrome in the town where he ran the Brighton Festival for ten years. Central will miss him, but I suspect we haven’t heard the last of him.