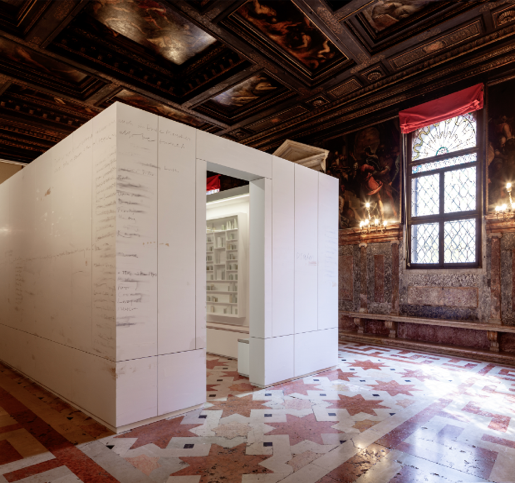 De Waal’s Library of Exile to open in British Museum

The artist and writer Edmund de Waal’s Library in Exile of more than 2,000 books of translation written by exiled authors and painstakingly gathered together by the writer and artist is to open in the British Museum next month.

“My family is a family of exile that has moved over the last 150 years from one country to another, and now, thank God, we’re in Britain” de Waal told AI last year. “And so for me, the reality of trying to make something that is a personal exhibition around what exile means is, of course, serious and significant”. https://www.artsindustry.co.uk/feature/1616-edmund-de-wall-my-life-in-venice-s-ghetto

The porcelain-covered pavilion (above), devised as a place of contemplation and dialogue, was first unveiled at the Venice Biennale last summer. Our image shows him with a model of his library.

“Into the walls is written a history of the lost libraries of the world, from Antioch and Alexandria, through Constantinople, through the ]destroyed Madrasah libraries, the 40 destroyed libraries of the Second World War in Germany, my grandfather’s library in Vienna looted, all the way to Timbuktu and Mosel” de Waal said. “That’s elegiac but there’s an extraordinary iterative history of people trying to destroy books. The words of Heine are there, saying ‘Once they start to burn books then they start to burn humans’.”

Edmund de Waal’s Library of Exile is at the British Museum from March 12 to September 8.