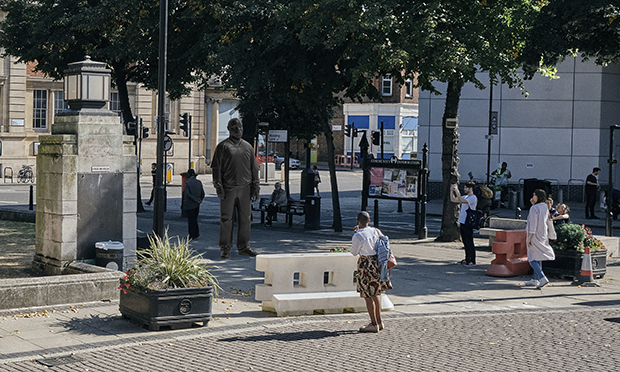 Two permanent sculptures, one of them nine feet tall, are to stand outside Hackney Town Hall to honour the Windrush generation, it was announced today, officially National Windrush Day.

The works of art are to be made by Thomas J Price and Veronica Ryan and will be installed next year.

The announcement comes amid a growing clamour for the removal of statues to individuals who have been associated with slavery and racist colonial policies, such as Edward Colston in Bristol and Cecil Rhodes in Oxford, and London’s mayor, Sadiq Khan, is setting up a commission to review the capital’s sculpture.

“It’s not an answer to the statue conversation” said Hackney’s mayor, Philip Glanville “but I think it’s an early down payment on righting some of that wrong, and a chance to see more diverse people represented in a public realm”. He said the sculptures would be a “real statement of pride” for the Windrush generation and its descendants.

Price’s larger than life figure will call on photo archives and digital scans of Hackney residents, highlighting the scarcity of black people represented in civic spaces.

“I think representation is incredibly important” said Price, whose grandmother was born in Jamaica. “It’s been so lacking, we just haven’t had it. You can count on one hand the number of public sculptures of statues of non-white people, and it’s even worse for black people. You have to be Nelson Mandela. It’s incredible. And yet that is just seen as normal.”

Ryan, now based in New York but who was brought up in London, will make a a series of large marble and bronze sculptures representing Caribbean fruit and vegetables, evoking her childhood memories of visiting East London markets.

“I have memories of going to Ridley Road Market with my mother (who migrated from Montserrat to London) as a child to buy fruit and vegetables, fabrics, and sewing materials” she said. “The movement of fruit and vegetables across the globe historically exemplifies the way people have been part of that movement. Many fruit and vegetables have their origins in Asia, and Africa. The perception of origins, and belonging to specific places is an extended part of the conversation.”