But the paper is determined to survive with the support of theatre people, and editor Alistair Smith telling AI “I’m still here and we’re still operating”.

In a statement this morning the weekly paper said the pandemic and ensuing lockdown had had a “devastating effect on our industry”.

“A high proportion of The Stage’s revenue is generated from recruitment advertising, which vanished overnight with the shutdown of theatres” the statement said. “The Stage is an independently owned family business and our small team achieves a huge amount. This is not the course of action anyone wanted or could have predicted. We have now spoken to the team members affected and are beginning to consult with them.” 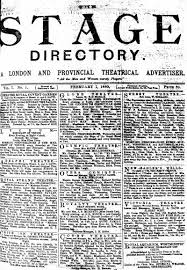 The paper’s management added it would survive the crisis “with the support of theatre people everywhere”.

“If you are in a position to help ensure we can continue to fight for what matters in our industry, please support us by subscribing. Our sincere thanks to all those who already have” the statement said.https://www.thestage.co.uk/subscribe

The Stage is the latest industry organisation to face job losses as the impact of the pandemic has hit. Theatres already forced to make cuts include the Royal Exchange in Manchester and Theatre Royal Plymouth, and the Nuffield in Southampton, Haymarket  in Leicester and Southport Theatre in Lancashire have gone into administration. Today The Stage was reporting that even the Royal Albert Hall, which receives no subsidy, could go bust next year without help.

The Stage was first published as The Stage Directory – a London and Provincial Theatrical Advertiser In February 1, 1880, running to 12 pages and costing three old pence. A year later it changed from monthly to weekly and under its present name. offering news, reviews and crucially recruitment advertising. Many illustrious careers  began  with answering an ad in The Stage, including  Idris Elba, Dusty Springfield, John Osborne, Kenneth Branagh, Ricky Tomlinson, Sandi Toksvig and Harold Pinter.

It was a joint venture between the founding editor, Charles Carson, and the businessman Maurice Comerford in rooms opposite the Theatre Royal Drury Lane. It was a crowded market but after The Stage dropped its price to a penny it cleared the opposition. After the death of Charles Carson’s son in1937 the business passed to the Comerford family, and the present managing director, Hugh Comerford, is Maurice’s great-grandson.