The Royal Borough of Kensington and Chelsea wants to transform empty commercial properties by bringing a new vibrancy. To Kensington and South Kensington, normally a major draw because its Exhibition Road museums and King’s Road shops, all of which are closed now in the lockdown, with the intervention of eight artists the first five of whom have completed their installations. 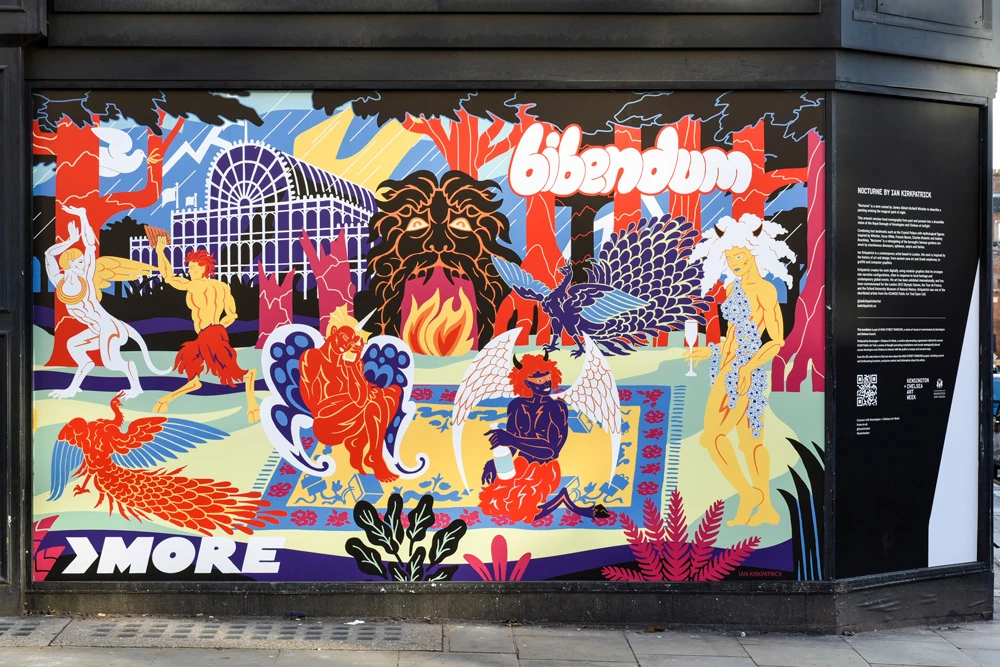 Nearby, Ian Kirkptarick has taken inspiration (above) from lost landmarks such as the Crystal Palace with mythical figures inspired by Whistler, Oscar Wilde, Francis Bacon, Charles Ricketts and Aubrey Beardsley, all of whom have been associated with the area. The artwork reimagines the borough’s famous gardens run amok by mischievous dinosaurs, sphinxes, satyrs and fairies.

Art Deco Paradise by Fiona Grady is inspired by the Art Deco department stores that helped establish Kensington High Street as the centre of retail during the late 19thand early t20th centuries, where department stores such as Derry & Toms and Barkers had a significant impact on the profile of London.

Alexander Ikhide has taken over 24-25 Cromwell Place to explore themes of identity, culture and history, while Gala Bell’s Fry Up at 32 Thurloe Place is “a cross over between the comfort of the kitchen and the dominion of the studio” the artist says. The alchemy of painting is surprisingly close to the recipe and material substances of batter – egg yolk in tempera, linseed oil mixed with pigments, the ground white powder of gesso, the heat and energy of hands.

The project, High Street Windows, has been managed by Kensington and Chelsea Art Week whose director, Vestalia Chilton, said: “Many art shows have also been cancelled, and this is another way to keep our creative economy going not just in The Royal Borough but across the UK.”