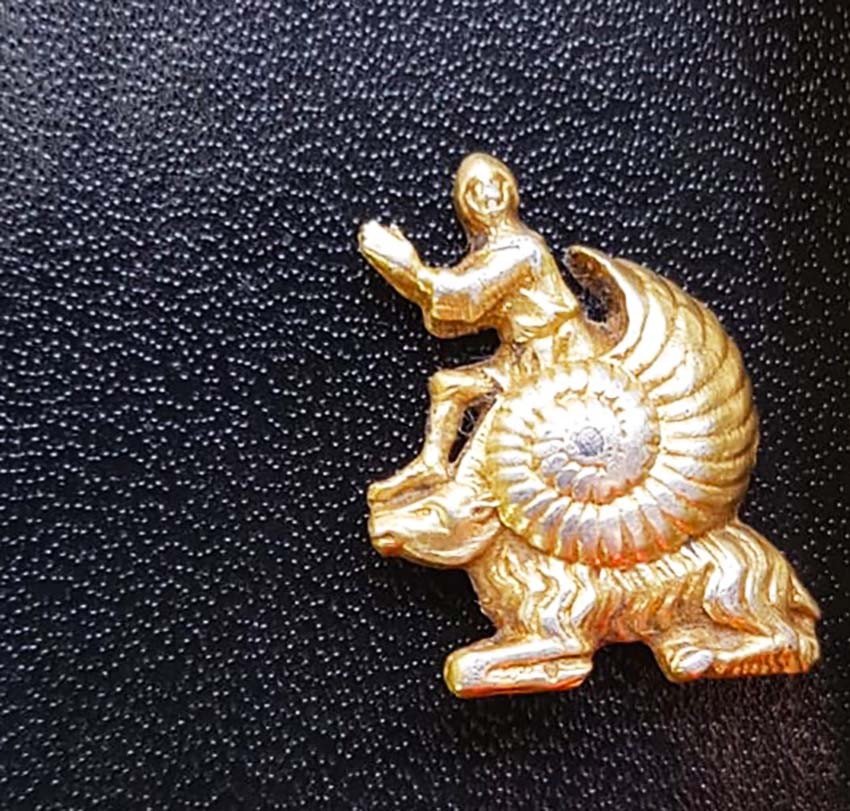 Treasures from a tiny silver gilt snail man to an elephant gold seal intaglio were among more than 20,000 of the latest finds, mostly unearthed by metal detectorists, according to a new Treasure Annual Report from the British Museum.

Of the finds 347 have been acquired by 108 museums, and almost all (935) relate to the museums’ areas. More than 96% were found by metal detectorists.

The purpose of the quirky snail man (pictured), found in Pontefract, West Yorkshire, last year and dating from between 1200 and 1350AD, is a mystery. Barely two centimetres tall it shows a knight in armour emerging in an act of prayer from a snail’s shell on the back of a goat.

“This unusual silver-gilt mount may once have been attached to a leather belt or strap, or perhaps worn as a badge” said Beverley Nenk, of the BM’s medieval collections. “The image of the praying knight emerging from a snail shell atop a goat implies an element of parody or satire.

“Snails are often depicted in the margins of medieval illuminated decorated manuscripts and are thought to symbolise cowardice, and this may be the intended meaning. The mount may be a satirical reference to cowardly or non-chivalric behaviour of opponents in battle, or as a parody of the upper or knightly classes. As such, it demonstrates the humour often found in medieval material culture.”

The gold seal intaglio, also found last year at East Walton, Norfolk, depicts an elephant carrying a howdah, dating from between 1250 and 1350AD, symbolising gentleness, strength and longevity. Henry III had an elephant in his menagerie in the Tower of London in the 1250s.

A Bronze Age rapier, broken into three pieces, was found near Stalbridge in Dorset, and a variety of Iron Age objects, including a pair of tweezers and a decorated mirror, dating from between 80BC and 100AD, were found at Kensworth, Bedfordshire.

“It is fantastic news that Treasure finds have been acquired by over 100 museums across England, Wales and Northern Ireland” said BM’s head of portable antiquities scheme, Michael Lewis, “with many ending up close to where they were found enabling local people to learn about the archaeology and history of their local area.”