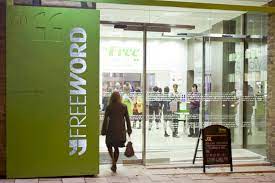 Free Word, the multi-disciplinary word-associated arts producer, is to close after 12 years following the loss if its central London headquarters.

Its Farringdon Road building has also been home to Arvon, which runs residential writing courses; English PEN; the human rights organisation Article 19; the Reading Agency; Reporters Without Borders; and the Literary Consultancy. It has itself developed work with over 2,000 writers, artists and activists including Selina Thompson, Travis Alabanza, Michael Rosen and Lowkey.

“Free Word leaves behind a rich artistic legacy and any surplus funds will be distributed in accordance with Free Word’s charitable objectives” said its chair, Tim Duffy, founder of the advertising agency M&C Saatchi. “Our longer-term aim is to find a like-minded cause to take on Free Word’s existing assets and ambitions. I would like to thank staff, past and present, for their commitment, talent and creativity in making Free Word what it was.”

Free Word was conceived as a venue and home for the literature and freedom of expression sectors "to explore th epimer and politics of words" by Ursula Owen, co-founder of Virago Press. In 2007 the Norwegian charity foundation Fritt Ord purchased the former newsroom and archive building of The Guardian newspaper for Free Word which opened in September 2009 with additional support from Arts Council England. Income generated from leasing office and event space within the venue supported Free Word’s artistic programming and venue management costs.

Affectionately known as "The Writer's Godmother", Free Word has been a creative home for a generation of emerging writers, and lockdown in the last year has seen it pivot to digital and non-venue-based content. However, hopes to develop its work online with stakeholders have so far not been realised.

Its CEO Roma Backhouse said she was saddened to have to make the closure announcement, but the decision of freeholder Fritt Ord to sell the property has meant that Free Word and its resident organisations will have to vacate it by May 31.