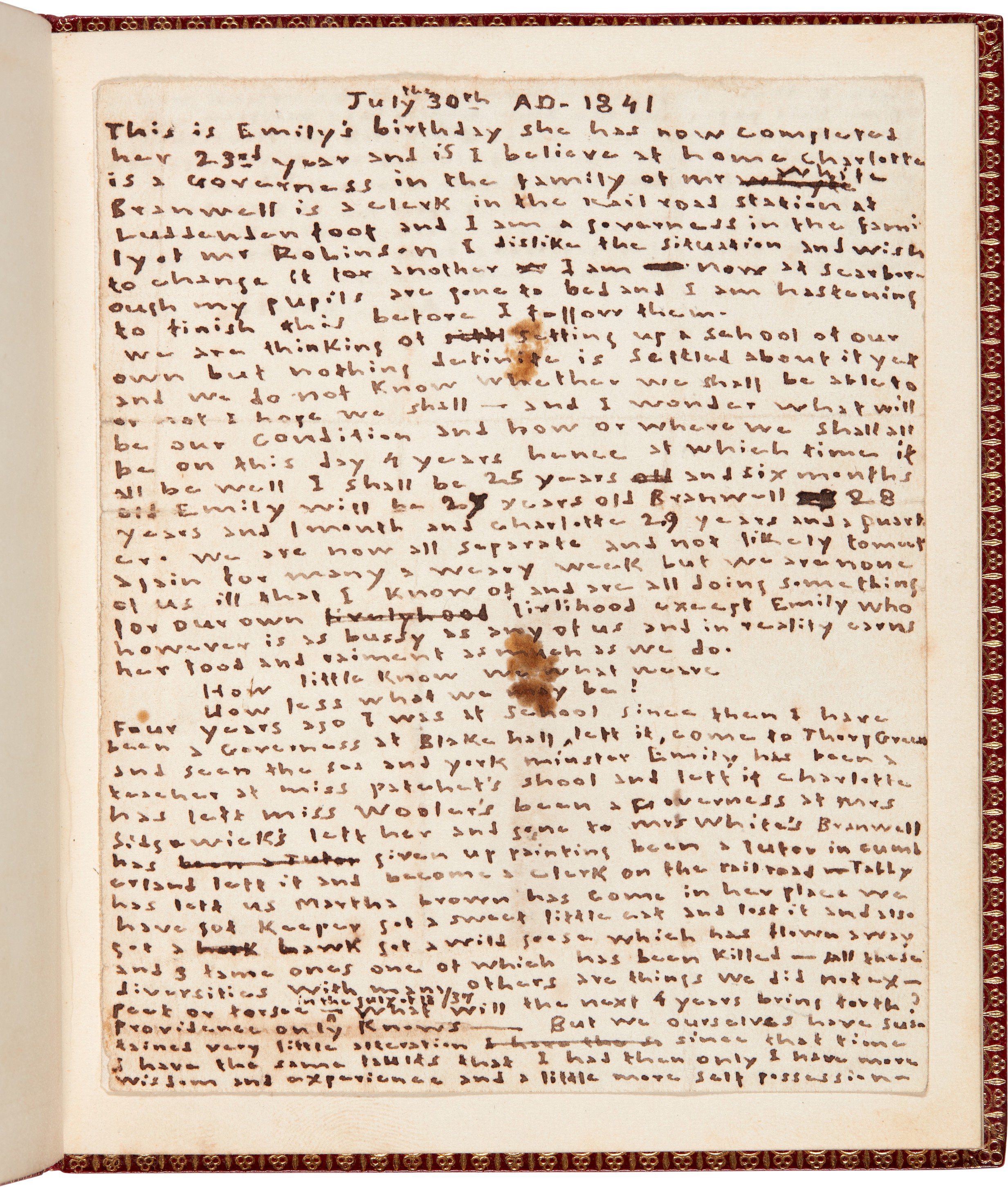 A fundraising campaign by the Friends of National Libraries (FNL) has ensured that a unique collection of Brontë-related manuscripts and books will stay in public collections in the UK.

The material is part of the Honresfield Library compiled by the 19th century Rochdale mill owner William Law, which had been in private hands since 1939 and which was to have gone for auction in the summer. Instead the FNL persuaded Sotheby’s to delay the sale to allow it time to raise the £15m valuation, which it succeeded in doing in just five months.

The collection includes works in the handwriting of Jane Austen, Robert Burns and Sir Walter Scott as well as a remarkable set of items relating to the Brontës, including Emily Brontë’s notebook of 31 poems with annotations by her sister Charlotte; the last in the series of the family’s series Young Men’s Magazine compiled by Charlotte; miniature manuscripts written in Charlotte’s tiny handwriting; first editions of Jane Eyre, Wuthering Heights, Shirley, Agnes Grey and The Tenant of Wildfell Hall; a manuscript collection of poems by Anne Brontë; illustrated diaries of Emily and Anne from 1841 (pictured); Emily Brontë’s annotated copy of the Brontës' rare Poems of 1846; and letters by Branwell Brontë.

The material will be shared among public collections including the British Library, the Brontë Parsonage Museum in Haworth, and the Brotherton Library, University of Leeds.

Prince Charles is patron of the NFL. “It is tremendous news for our country that Friends of the National Libraries, a charity of which I am proud to be Patron, has raised £15 million in just five months to save one of the most significant collections, including manuscripts by Charlotte Brontë, Walter Scott and Robert Burns" he said. "I can only congratulate the Chairman, Geordie Greig (chairman of the FNL), and his team for saving the Blavatnik Honresfield Library for the nation, with its treasures now to be owned by some of our greatest national libraries across the U.K.

“Our literary heritage is our cultural D.N.A. and this preserves it for students, teachers, academics and ordinary readers in perpetuity.”

Greig, until recently editor of the Daily Mail, added: “The generosity of all the donors has been incredible in saving this unique library, especially Sir Leonard Blavatnik, who wonderfully matched the £7.5m that we had raised ensuring that our campaign to save the collection was successful. There has been unprecedented public interest in this collection of manuscripts and books hidden for almost a century.

“Rescuing it has seemed a little like opening an Egyptian tomb to see for the first-time ancient texts and treasures which are now saved in perpetuity for students, scholars and book-lovers. Thanks to FNL’s successful campaign the collection will be shared by libraries and writers’ houses all across our island, restoring a treasure trove of manuscripts to their birthplaces.”