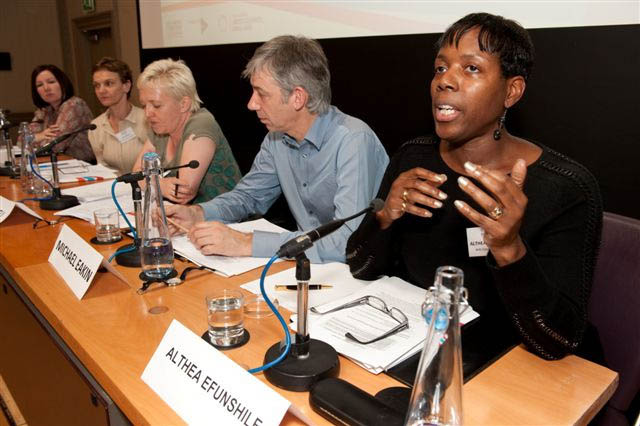 Deputy CEO who was central to securing surprise settlement to retire

Althea Efunshile, who effectively held Arts Council England together during the transition between CEOs and drove ACE thr4ough its most challenging time is to retire in 2016, when she will be 60.

Since joining ACE in 2007 she has been responsible for strategic planning across the organisation, led the policy on children and young people and most recently had a central role in negotiations with the government over the Comprehensive Spending Review settlement for the next four years.

He arrive3d just before the recession struck, to be followed by grant cuts and a an instruction by DCMS to cut ACE’s administration by half. For that, she told AI, she had to go back to basics: “We fought hard with DCMS who wanted it done in the first year of a four year period (by 2011), which was crazy. That wasn’t time to think, never mind do any proper planning and to be sure what we were doing was done properly” she said.

She masterminded the move of the services operation from London to Manchester, saving £1m, and of the head office staff from Westminster to Bloomsbury for another £1m saving.

“Her strategic shaping of our work has helped us secure the confidence of government and the arts and culture sector” said Daren Henley, whom she stood in for as chief executive before she joined earlier this year. “Her negotiations with Treasury and DCMS officials in the recent Spending Review were critical to us securing a great settlement and she has consistently championed children and young people in her role.  Our recent announcement of our Cultural Education Challenge was the culmination of a vital body of work led by Althea.

“We shall miss her enormously but she leaves an organisation that is in very good shape, with really strong processes and people – many of whom, she has recruited.”