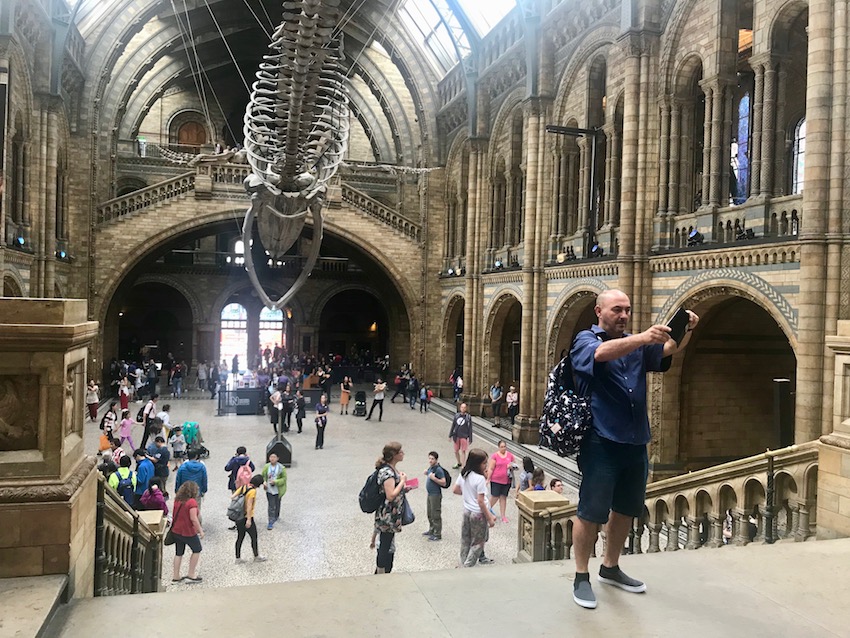 At the beginning of September the Natural History Museum will open a new suite of rooms in a hitherto forgotten wing of Waterhouse’s South Ken palace, something AI will report on fully later in accordance with an embargo.

But there’s no embargo on what its creation is a symptom of: a situation that is increasingly likely to force the re-institution of admission charges for national museums, something the NHM’s director Sir Michael Dixon is heartily opposed to but whose hand may be forced; and the fact that the 137-year-old building probably needs £100m spending on it, a state of affairs which the government is studiously ignoring.

Without going into details, the new suite is part of the NHM’s changed approach to its public in the hope that they will come to realise “less what we are, more what we do” he says. This approach to its adult enthusiasts rather than the dinosaur-hungry kids which had been its quarry in the past is a basis for a major new strategy he and his trustees are compiling.

Because the NHM is more than the tourist attraction the government sees it as – in fact, its value as a spectacle is minor compared with what else goes on there.

It is the world’s premier research establishment in palaeontology, and in the good old days of 2009 Dixon opened the £78m Darwin Centre in which the public can see the museum’s scientists in action. The museum has upwards of 200 full-time research scientists – “actual professors, some of them” one of the palaeontologists said wonderingly. Dixon talks about “the big societal issues” the museum is concerned with, completely out of the public eye.

There’s a programme called DeWorm3 which is working on the eradication of the intestinal parasitic worms that affect 1.5 billion people worldwide and undermine whole economies. Other teams are working on how to secure global food supplies in the future, and the availability of scarce minerals, vital research no other institution can do, but for which Dixon and his team have to fundraise to carry out. At one point recently the scientists even rattled buckets in the main entrance to raise money for vital field research.

“But it’s not overtly about fundraising” Dixon says. “It's also about supporting the causes of the museum, things that are highly relevant to big society, and we think we can engage an audience much more effectively in what the museum stands for”.

He was chairman of the National Museums Directors Conference a year later when the new Cameron government ushered in its austerity regime and he warned then that a funding cut of 15% could mean the re-imposition of admission charges. Since then there have been 30% cuts, and museums and galleries have stayed free partly by not spending money on essential refurbishment. The NHM gets just short of £40m a year from DCMS, but there could be capital repair emergencies of Buckingham Palace and Houses of Parliament dimensions.

Free admission since 2001 has multiplied visitor figures for national museums and galleries but there has been a much-publicised slump in the last couple of years, which Dixon puts down to terrorism scares and families’ pre-Brexit belt-tightening. The NHM lost about 400,000, but it is now almost back to its 5.5m a year best thanks to judicious publicity. “We went back to focussing our marketing on more adult audiences which has made a difference, and the PR campaign around the Hintze Hall (the refurbished and recast main atrium space) and revealing the blue whale has helped” he says. “We get a lot of one-time visitors from overseas, but we want to build a more loyal following among UK residents as the museum’s own scientific work has a direct impact on society”.

The future is, to say the least, uncertain, and the one-dimensional view of what museums and galleries are for is not helped by controversialist newspaper columnists claiming they are hiding important objects from the public. The truth is that they put everything they can in the public eye within the parameters of the objects’ safety, but museums of both science and art do so much more than strive to gold the public eye.

That free admission has increased public appreciation is indisputable, with numbers rising by an average of 150%, 270% at the NHM, and Dixon sees it as key to the future. But they are mostly in Victorian buildings that are decaying, while government support falls progressively away in the smug assumption that foreign tourists will subsidise them through their shops and cafes. The strategy Dixon is devising will shift the public understanding of what museums do rather than what they are perceived to be, “if only” he says “the government would continue to support museums at a level that makes free admission feasible”.