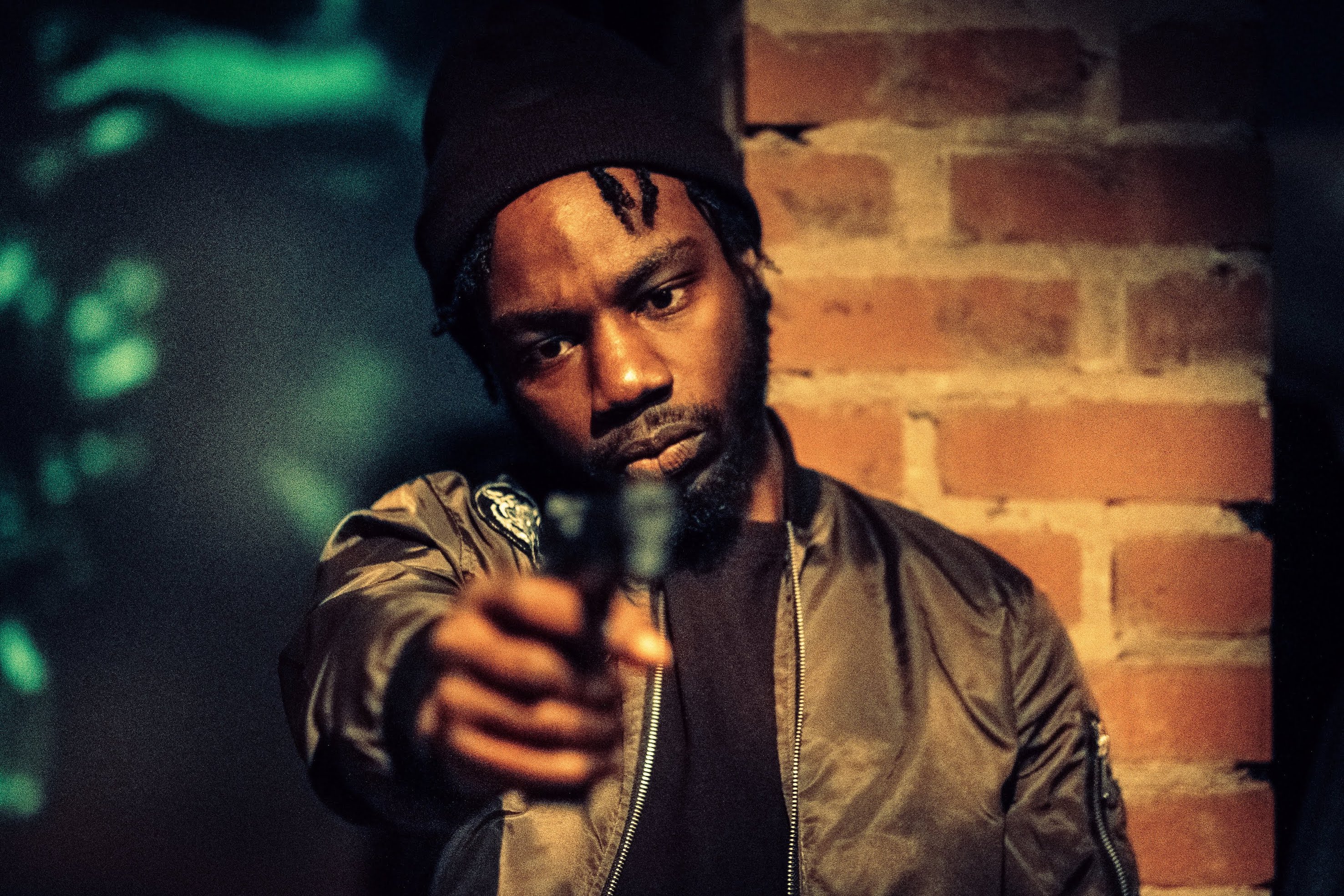 This image is from a play. Both are quite literally “in yer face”.  So are the issues they confront: alienated youth, drugs, knife and gun violence.

The subject in this play, Bullet Tongue, is County Lines, the system whereby dealers – “shotters” – can deal outside their gang area, using vulnerable young people. The production has been created by The Big House, and principally by the cast, all of whom have been in care and trapped in County Lines. One of them still is.

The Big House is a theatre company with no stage, no resident company and no subsidy. Its plays have been critically acclaimed, not least this one, but it has no interest in reviews beyond their ability to draw people into The Big House. It has stories to tell, and lives to save.

The co-author of this play is a recovering crack addict who learned her craft in prison. She and the cast are living testament that theatre can rescue young individuals society has given up on. The young man behind the gun is typical: lost, rejected, isolated, frightened, hopeless, angry. He is the youth of our ganglands, where drugs are a way out of the void he and his like have been tipped into when being in care officially ended at 18. Some have already been long trapped in the County Lines by the age of 18. Almost half of care leavers aged 19 are NEETs – not in employment, education or training; they are four times more likely to commit suicide than any other kids; 20% will be homeless within two years of leaving care.

The Big House’s aim is to get these young people either into work or back into education, but sometimes, almost by accident, they end up in the business. So Jasmine Jobson, just named as the star of the next series of the cult Netflix series Top Boy, was dubbed by social workers “the most difficult child in Westminster” before she joined The Big House in 2013, and starred in its first production.

But mostly The Big House gives the youngsters nothing more than self-confidence, self-esteem, aspiration, a sense of teamwork and life skills over an 18 month persionalised project. And maybe a job – The Big House Means Business employs some of them to tour the country giving workshops on things like empathy to, for instance, Barclays Bank leadership courses.

It gets nothing from the Arts Council or DHSS. The Big House has to fight for the kids sometimes, so that its founder, Maggie Norris, had to go to court for a girl facing eight years for dealing and got her off, so that she could go on to star in its 2016 Royal Court production, Knife Edge. She has to go to university authorities to explain why an applicant should be taken despite having no GCSEs never mind A levels, and usually succeeds.

The Big House attenders are recommended by care leaving teams, social workers, probation officers, but chiefly other kids, and the irony is that if it had formal funding it wouldn’t work – training regimes would be imposed as a condition, grants would depend on targets and achievement reports, and the youngsters would be beset once more by the bureaucracies they see as having ruined their former lives. They wouldn't come.,

It is only operating in London and needs, Norris says, to be replicated around the country. But it works on two levels: in giving cast-off kids a lifeline back into society and throwing a glaring light on the world most of us only read of with horror. In the six years it has been going 93.5% of attenders have not offended in the 12 months after completing the project; 68% had got jobs or were education or training in the same period.

The Big House is at 151 Englefield Rd, London N1 3LH, on the corner with Essex Road, and Bullet Tongue is on there until December 8.