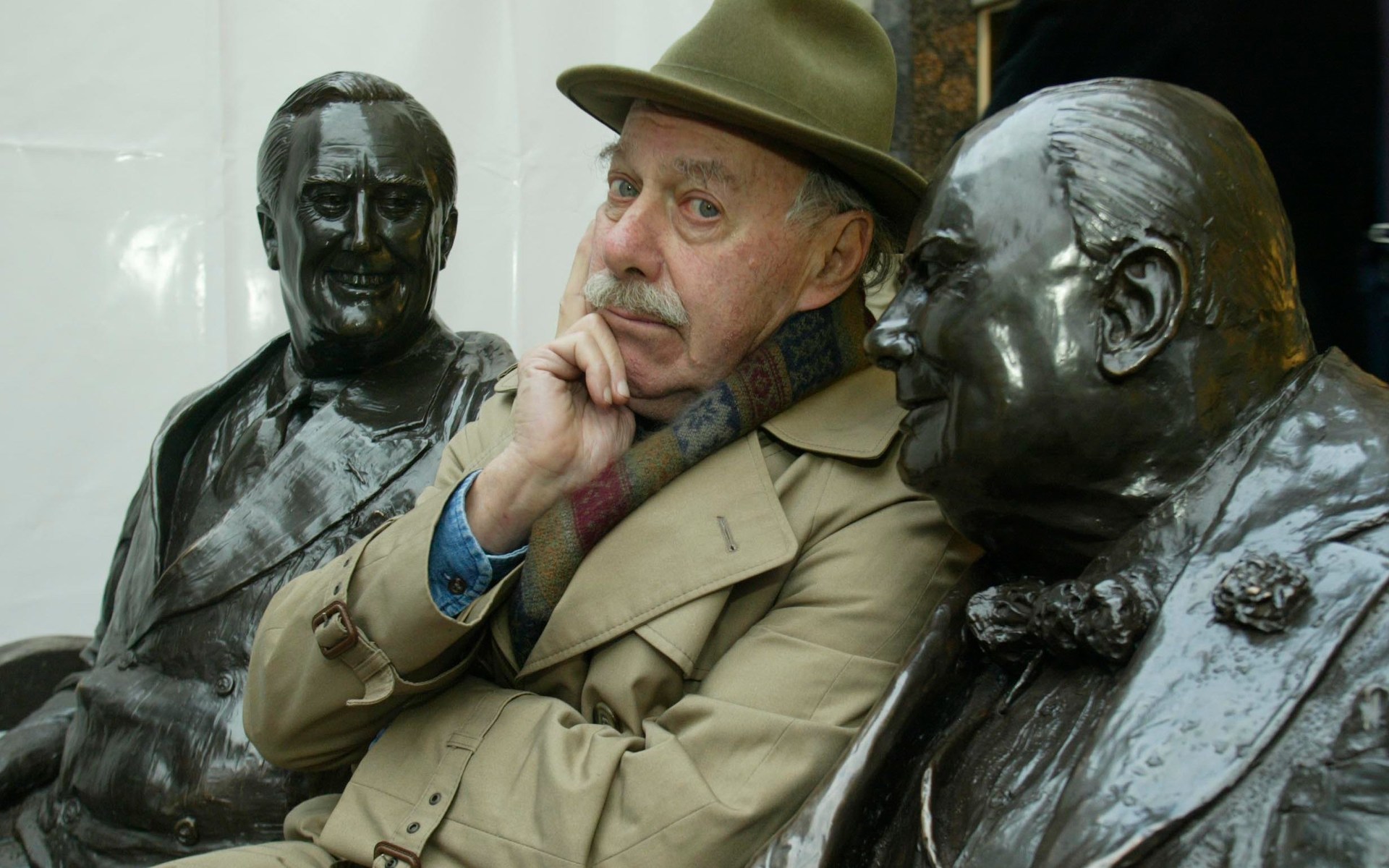 TAITMAIL Art, Larry, and how another Christmas saved the world

I’ll spare you another Brexit sermon, that can wait at least a week. Instead I can take advantage of the fact that today is December 7, the anniversary of the Japanese attack on Pearl Harbour, and make a connection with the extraordinary polymath Larry Holofcener, who died last year aged 91, Franklin Roosevelt and Winston Churchill.

The first connection is that it was this American actor, singer, song writer, lyricist, playwright, novelist and sculptor, and I’ve certainly missed one, who made the bronze sculpture of Churchill and Roosevelt sitting together on a bench in New Bond Street. It has become a tourist landmark since it first appeared there in 1995, and my picture (copyright Heathcliff O’Malley) shows Larry enjoying their conversation.

The other connection is what I witnessed earlier this week at a lunchtime read-through in a West End theatre, organised by his wife Julia and the actor Graham Pountney. I’d met the Holofceners when they were here for his 90thbirthday to unveil a sculpture of Shakespeare at Stratford-upon-Avon. We talked about his dream of bringing to the stage the story of the little-known “long weekend” just after Pearl Harbour when Churchill, prompted by it, and against all advice from both sides of the Atlantic, flew to Washington and foisted himself on the Roosevelts’ White House for Christmas, during which time he persuaded the president to make Europe his priority before the Pacific. It changed the war and saved the world.

Having read James Mikel Wilson’s The Big Sleepover at the White House, Larry was determined to dramatise the birth of the special relationship that weekend, and wrote a two-hander narrative.

Larry held dual American-British nationality, and he and Julia had a house on the Isle of Wight. We had our chat at the Chichester Theatre where he’d gone to see the plaque he made of Laurence Olivier, first artistic director of the Chichester, with portraits of him in 24 different roles which he had given to the theatre on condition it be displayed in the foyer as a permanent tribute to Olivier, who unveiled it himself in 1985. By 2016 it had disappeared, consigned out of the public gaze to the green room, a discovery Holofcener responded to with indignation (the mild-mannered Larry didn’t do “outrage”, though he might have done). He demanded its return, and it now adorns the little Apollo Theatre at Newport, IoW, a community theatre run by volunteers. How very Larry.

Holofcener graduated from two universities, and went on to write songs for the Sid Caesar, Imogene Coca and Carl Reiner TV shows. He co-wrote a couple of Broadway musicals, and then branched into pop songs. His 1968 play, Before You Go, has been performed all over the world. He acted with Carol Channing and Ginger Rogers in Hello, Dolly! and in films including Walking and Talking, directed by his daughter, Nicole. In 1960 he compiled and edited A Practical Dictionary of Rhymes for Crown Publishers; in 1976 – while renovating a mill in New England - he wrote Day of Change; in 1981 he published Britishisms, a British-English dictionary. In his enthusiasm for recording historic figures he has made portrait busts of Albert Einstein, John F Kennedy, Mother Teresa, Martin Luther King, Nelson Mandela, Frank Sinatra, Leonard Bernstein, Albert Schweitzer, Muhammad Ali, Mahatma Gandhi, Anne Frank and, to come full circle, Eleanor Roosevelt.

“I need to find a proper playwright who’ll knock it into shape” he told me about his Big Sleepover project, and it has turned out to be Giles Cole, the actor, journalist, scriptwriter, producer and playwright. He has turned the two hander into a five character two-acter, and now vying for domination of the set is the redoubtable First Lady – read by Nichola McAuliffe to Patrick Ryecart’s Churchill. It’s a delight, somehow both funny and momentous, intimate and world shattering. It needs to be seen, and at a time when the special relationship born that terrible Christmas has, 77 years later, become barely a relationship let alone special, we need to be reminded through this bit of theatre of what can be achieved by two beleagured and determined statesmen after Christmas dinner over a whisky and soda and a very dry martini (Churchill couldn’t abide cocktails). And as a tribute to gentle polymath who, through his own art, got to know them both.