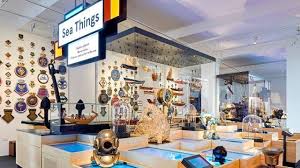 The new director of the Royal Museums Greenwich is to be Paddy Rodgers, a man with no professional museums experience at all.

Until February Rodgers, 58, was the chief executive of Euronav, one of the biggest oil tanker companies in the world, a job he’d had for 19 years and the pinnacle of a career spent almost entirely in shipping, even though he has a law degree.

He will succeed Kevin Fewster who has just completed the four year Endeavour Masterplan which created four new galleries and an off-site collections centre. Fewster also opened the new Sammy Ofer Wing, the temporary exhibitions centre, a ship model store at Chatham Historic Dockyard (clearing more exhibition space at Greenwich), and the refurbishment of the Inigo Jones designed Queen’s House. The Royal Museums, their collective name since 2012, comprises the National Maritime Museum, the Cutty Sark, the Queen’s House and the Royal Observatory.

So the museum now has more space not just for temporary exhibitions but for retail and for refreshment, the stuff of research dispersed “off-site”. “With his first class links in the maritime industries, demonstrable communication and leadership skills and experience of environmental impacts, the Museum’s Trustees believe Paddy is the right person to lead the museum on the next stage of our development” said the trustees’ chair. So connection to industry, it seems, is the future for our national museums, but for scholarship or for funding?.

Meanwhile, the director of the Natural History Museum, Michael Dixon, has this week announced his retirement. Fifteen years ago he was a surprise appointment too, having been running London Zoo and before that been involved in scientific publishing.

But the mark of his directorship, more important than doubling visitor numbers which he also achieved, has been the championing of research by the museum’s experts. In 2009 he opened the £78m Darwin Centre where the public can watch the museum’s 200 full time scientists in action. They’re working on the eradication of the parasitic worms that affect 1.5bn people worldwide, on securing global food supplies, on finding ways of making scarce but vital minerals available.

Dixon has also been a champion of free admission in the face of a 30% cut in subsidy since 2010. Our national museums occupy grand but old buildings, and we are not investing in their upkeep, he says. £100m might fix the NHM, but that’s not coming from public purses anymore, so it has to come from the public. Hence more shops, more caés, more populist paying exhibitions.

And all at the expense of curators. Last year Leicester Council’s museums got rid of all theirs: “We’re looking at the need for the service to modernise and be more user-focused” said the city’s head of arts and museums, and its spokeswoman added that the structure“hasn’t changed for many years and doesn't reflect the demands made on it” – the immediate demands being for the council to save £320,000 in its reduced budget. The alternative to getting rid of the curators, the council said, was to close its main museum.

Mr Rodgers undoubtedly has the National Maritime Museum close to his heart. Last year he ran a marathon to raise money to finish the masterplan, and he is listed as a Life Patron, which, given that there are two patron categories advertised, Associated (£1,500 a year) and Pioneer (£5,000-plus a year), must mean he commits a large annual sum to it from his successful career.

But he is being brought in to run a business, not the research establishment Sir Michael Dixon is leaving to his successor, so that Rodgers’s priorities are likely to be similar to those of the industry contacts he has that so impressed the trustees that have appointed him, priorities like footfall that would not necessarily include free admission or collection care.

Or perhaps he will defy the worst fears of some and prove to be a stout defender of the scholarship-supported public service that museums were founded to provide, both in front of and behind the displays.